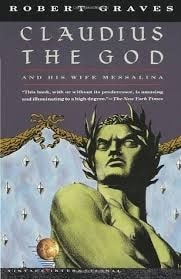 When a novel is named one of the greatest books of the 20th century, it’s not surprising that its sequel is going to have a hard time measuring up.  So it is with I, Claudius and Claudius the God, a pair of historical novels published in 1934 and 1935 by British poet and classicist Robert Graves that combine to tell the story of Claudius, the fourth emperor of Rome from 41-54 AD.  While the first book tells of Claudius’ life before his ascension to the throne – including all the intrigues of his predecessors, Augustus, Tiberius and Caligula – the second novel recounts the subsequent and relatively less eventful thirteen years of his reign as emperor.  Nonetheless, Graves’ sequel still succeeds as an entertaining fictionalized autobiography of a remarkable man.

At the end of the first book, following the assassination of Caligula – along with his wife and daughter – it is unclear who will have the power to fill the vacuum at the imperial palace. Much to his surprise, Claudius – the dead emperor’s uncle – is found hiding behind a curtain and declared emperor by the Praetorian Guard.  The second book resumes the story a couple years later, with Claudius trying to half-heartedly defend his position as preeminent monarch, having spent most of his life arguing for a return to Roman Republican rule. 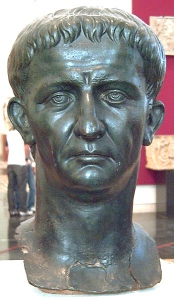 When he wasn’t leading the first sustained Roman conquest of Britain or designing a vital upgrade for the Roman harbor city of Ostia, Claudius was implementing changes in the Roman government and legal system, routinely serving as a judge for cases both large and small. While relative to his predecessors he tended to rule with a generous and thoughtful hand, he still found ample opportunities to execute political opponents, when necessary

Serving to energize the story a bit, Graves makes a wise decision to include much of the story of Claudius’ close friend and political advisor, Herod Agrippa, a Jew who served as King of the Roman province of Judea. Providing information about the king’s reign in the eastern part of the empire allows for plenty of commentary about the earliest days of what would eventually be called Christianity.  Viewing this upstart rebellious movement from the unique perspective of an indifferent emperor in Rome makes for entertaining reading.

While Claudius the God is not as riveting as the first book, Graves has created such a compelling character in Claudius that I simply had to know how it all turned out for him.  I can recommend it enthusiastically for anyone who enjoyed I, Claudius, as it engagingly provides much needed closure on the life of a remarkable man.

Check out the Readers Lane review of I, Claudius

Review of other books about the Roman Empire:

Julian   /   A Most Dangerous Book