To Hell and Back.  No, really. 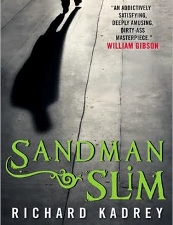 James Stark has been to Hell and back.  Usually when someone says that, it’s figurative.  They’ve had a rough time.  Not for Stark.  He went to Hell.  Now he’s back.  He’s the first living mane to be able to use the phrase literally.

Stark is the main character in Sandman Slim (a title that isn’t explained until well over halfway through the book – but it doesn’t matter).  Upon his return from Hell – he arrives in a Los Angeles cemetery lying on a pile of burning debris – he has but one goal; to find those who sent him Downtown (as he calls it) and kill them.  Not for sending him to be tormented by Hellions, but for killing the love of his life long after he was gone.  Stark is sort of a romantic that way.  He’s also really good at killing things and he likes it.

Those his mission is well defined, his methods are not.  He’s been gone for eleven years and things have changed.  He has some tricks up his sleeve and some tools from Downtown to help him out but he also relies heavily on some acquaintances from his earlier life.

You see, Stark is a magician.  Not the kind that performs at nightclubs, the kind that performs real magic – the dangerous kind.  His former associates are part of what is known as the Sub Rosa – LA’s secret society of the occult, magical, mysterious and monstrous.  As he pursues those who wronged him he adjusts to the new normal, reconnects with his (very) few friends – even managing to make some new ones – and, far more in keeping with his personality, picks up a whole bunch of new enemies.  There’s trouble afoot in LA, and Stark always finds the trouble.

Sandman Slim is basically a noir novel whose characters are a bunch of badass evil magicians, angels and monsters.  Stark has a grim and biting sense of humor that almost makes us like him.  It’s hard, though, because he cares so little about anything.  His time in Hell didn’t change him for the better and he’s brusque and rude and violent.  Since we see the world from his perspective we understand why that is, but it makes for a less than cuddly protagonist.  I’m okay with that.

Author Richard Kadrey builds an interesting, complicated world for Stark to wander.  He introduces his own concepts of the nature of Heaven, Hell and their influences on the mortal masses, as well as establishing his own brand of magical society.  His descriptions of Stark’s time in Hell are particularly well drawn, giving us a good feeling for our main character and his immediate past.

He falters a little when it comes to tying his world together.  There are a lot of loose ends – not to this particular story, but to the world he’s created.  Things that are vaguely explained (like the author knows what he wants to describe and just doesn’t quite get there) leave us with holes in the background fabric of the story.  Kadrey manages to make plenty of pointed societal commentary, however, which is fun coming from the cynical mouth of Stark.

I enjoyed Sandman Slim but it didn’t grab me completely.  It was a bit of a slog to get through, bogging down on occasion with its own brand of technobabble.  James Stark is a pretty fun character and the book leaves room for sequels – and indeed there are four more Sandman Slim books.  I’m definitely willing to give them a try to allow Kadrey to really flesh out this crazy world he’s created.  3 ½ stars out of 5, with a recommendation for anyone interested in the gritty underbelly of the paranormal.  This is most definitely not a book for the religious who are easily offended – Heaven and Hell and everything in between takes a good sarcastic beating.  The rest of you?  Give it a shot.