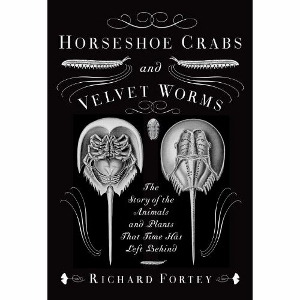 Acclaimed author and paleontologist Richard Fortey has chosen a new way to travel back in time for his most recent book.  Setting aside his usual rocks and fossils, he searches the world for “living fossils” – the most primitive creatures he can find – traveling many thousands of miles and venturing hundreds of millions of years into the Earth’s ancient biological past.  The result is Horseshoe Crabs and Velvet Worms, a formidable catalog of some of the most bizarre and stubbornly persistent beings on the planet.

Leaving his favorite trilobites at home, Fortey visits numerous disparate locales – New Zealand, Yellowstone, Ecuador, Delaware, Australia, Hong Kong, Newfoundland and more – to find species whose positions on the vast evolutionary tree of life are closest to the trunk.  He seeks out horseshoe crabs, the most primitive living arthropod; tuataras, the most primitive living reptile; tinamous, the most primitive living bird and many more.  He also hunts down plants and animals some of whom are the last remaining representatives of their otherwise extinct groups – peanut worms, brachiopods, velvet worms,  penis worms and gingko trees, to name a few.

Gallantly, the author thanks his wife who arranged the numerous field trips that allowed him to seek out these disparate and hard to find creatures, some of which I’d never even heard of before.  For each goal species, he includes many entertaining details about the hunt, the animal’s natural history and how its story fits into the larger evolutionary picture.

Frequently throughout the book’s 400 pages, Fortey discusses what it means to be “primitive”.  Humans, as relatively recent arrivals to Earth’s evolutionary saga, tend to place a premium on their “highly evolved” status.   But from an unbiased perspective, it’s obvious that modern day horseshoe crabs have spent just as much time evolving as modern humans.  Both species have changed considerably since they split from their common ancestor more than half a billion years ago.  On the surface it may appear that horseshoe crabs haven’t changed much over the past couple hundred million years, but scientists are only now discovering that they may have changed significantly in less obvious ways.  Similarly, the immune systems of ancient animals like sharks may be much more sophisticated than we realize, which might explain their purported resistance to cancer.  Plenty remains to be explained, but it may be that horseshoe crab and shark evolution has taken place more at an immunological rather than morphological level.

This kind of biological and evolutionary discussion is exactly the kind of stuff I like to read about and I’ve enjoyed three other Fortey books: Earth, Life and Trilobite.  So I was surprised and disappointed that I had such a hard time getting through this one.  Fortey is undoubtedly a very gifted paleontologist who seems to be overflowing with biological knowledge, but I really struggled with his writing style this time, more so than in the past.  Frequently, his massive paragraphs leave me with an unpleasant bloated feeling and it seems that his focus isn’t as sharp as it should be.  He needs a hard headed editor to give his writing more clarity and concision.

In the end, Horseshoe Crabs and Velvet Worms is an interesting exploration of dozens of plants and animals that rarely get much attention.  Unfortunately, this time around, Fortey has trouble packaging his vast expertise into a consistently digestible written form.  Although it pains me to say so, I have to admit that I’ll be less likely to run out and snap up his next book.