Appetite for Wonder, An

From Africa to Oxford… 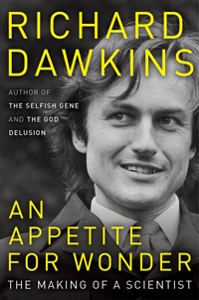 What was it about your childhood that made you who you are?  What were the key turning points that might have completely altered the course of your life?  Humans seem to have an unending fascination with these kinds of “what if?” questions and when it comes to famous people, the intrigue is heightened even further.  In the world of biology, there may be no greater celebrity than Richard Dawkins, author of The Selfish Gene in 1976 and The God Delusion in 2008.  In his much anticipated memoir, An Appetite for Wonder, the prolific science writer and public speaker tells his unique story and wonders how his life might have turned out differently.

Appropriately, the author starts out at the beginning, laying out his family tree with plenty of entertaining anecdotes about numerous accomplished ancestors and relatives.  He then goes on to describe his childhood in East Africa during World War II, wondering what effects the teeming wilderness had on his future career choices.   His years in numerous British boarding schools, both in Africa and back in England are detailed at length, including the loneliness of a seven year old without his mother, the inevitable bullying and a handful of influential and talented teachers.

The second half of the book discusses his college, graduate and post graduate years, focusing primarily on his years studying zoology at Balliol College, Oxford under future Nobel winning ethologist  Niko Tinbergen in the 1960s. A few years teaching at UC Berkeley – actively protesting the Vietnam War – and he was back at Oxford teaching, where he has been ever since.  The book finishes with the publication of his first book, The Selfish Gene – a bestselling first step on Dawkins’ road to scientific stardom.  God willing, the author has promised a sequel in a couple years that will cover the second half of his life. 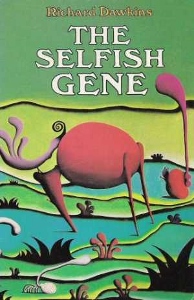 The original cover of The Selfish Gene, with art by the famous ethologist Desmond Morris.

I’ve been a Dawkins fan for years, enjoying both the clarity of his science writing and the vivacity of his atheistic arguments.  But I approached this book with a bit of trepidation, worrying that I might not want to get to know the man too well.  While I certainly know a lot more about him now, the book is remarkably scant when it comes to his personal life, especially in his adult years where Dawkins mentions his wife in passing just a few times.  He chooses to focus primarily on the science, describing much of his own experimental research – chickens, crickets and ancient computers – which led to his groundbreaking and life changing first book.

Richard Dawkins seems to be one of those individuals that people either love or hate.  I expect An Appetite for Wonder will have exactly zero impact on this dichotomy.  Fans like me will encounter much to entertain them – fun science, pithy anecdotes and a rapier pen – while his detractors will find more to dislike or discredit.  While I would have liked to read more about the adult man’s personal life, I found his unique life story to be well told and consistently entertaining.  I can confidently recommend the book to all Dawkins fans and I’m looking forward to the sequel.