Whisper Down the Lane 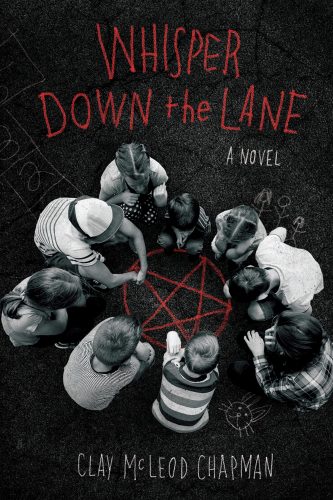 Richard is happy in his new marriage to fellow teacher Tamara. It is new love and his first chance to be a father to Tamara’s young son, Elijah. Everything is going well, until one day the school’s pet rabbit is found on the school grounds, ritualistically sacrificed. There is something strange and horrifying at work here, something that sparks talk of children corrupted by satanic cults. And it’s only the beginning. For Richard, this is the return of a nightmare, of suppressed memories of his childhood in the 80s, of what he did then, of what he supposedly exposed. As the school devolves into a panic and Richard’s family pet becomes the next victim, secrets begin to spill out, and nothing will ever be the same again.

Whisper Down the Lane is an unlikely story, bisected by two timelines. Richard’s present and the past of a little five year old boy named Sean, who in the 1980s tells a lie that balloons into a runaway trial, ultimately ruining lives and adding fuel to the satanic panic. As the story continues, the two timelines came together and the exposé (and all its horrific consequences) builds into a crisis. Who is Richard, really, and can he escape his past?

I was ultimately nonplussed with Chapman’s subtle horror story. It seemed unrealistic, forced, a bit ridiculous. It was only after finishing the book, and finally coming around to the tiresome task of reviewing something that was a bit of a chore, that I discovered Whisper Down the Lane was based on true events – the McMartin trial. Even still, knowing that the out-there plot is not as comfortingly unlikely as it seemed, this book failed to draw me into its sinister fold. I was only tangentially interested, in the way of a bored traveler examining strip shopping centers as they whiz by the window. I was invested only when there was nothing better to do.

Part of the issue, at least to me, was Richard’s un-likability. He was a dull character, one acted upon rather than a person engaging in the world around him. Events coalesce and chase him, yet he takes no agency and is so busy obfuscating, lying even to himself, that he is ultimately unsympathetic. And the story should have some level of sympathy – especially for the five-year-old Sean who does an unforgivable thing but is somewhat shielded by his ignorance. Still, it’s all beneath the surface, implied instead of shown.

And then there is the animal violence. The rabbit that begins the story is bad enough, albeit not unexpected for a story about Satanism, but what happens to Richard’s pet cat – the idea of it and the description – made me sick and sad. It was too much and not necessary to the plot. As an animal lover in general and a cat lover specifically, I really just wanted to stop reading at this point.

The conclusion is the usual: the switch we all expect, the revelation that is obvious from page one, the dues ex machina that is par for the course in such a book. It was a cop-out. It was nothing special, nothing original.

In the end, I didn’t hate Whisper Down the Lane, but I certainly didn’t like it either. Not recommended.