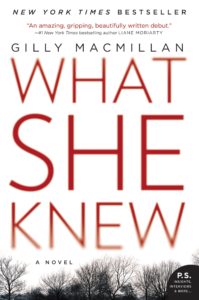 What happens when a nature walk becomes the realization of your worst nightmare? Rachel Jenner, struggling newly single mother, barely recovered from a devastating divorce and sudden loss of stability, is about to find out. Encouraging her eight-year-old son to be independent and adventurous, she allows him to run ahead along a quaint woodsy path that they both know by heart. And that’s the last that she sees of him. Hours later in the freezing rain, with nightfall ending all hope of finding answers, tear-drenched and surrounded by police and would-be-helpful searchers, all she has to go on is a single tire swing rocking in the wind and a feeling of total abandonment. Bad mother.

Who would take a child – any child, much less her sweet natured Ben? Is this a perverted stranger, a killer, or someone near and dear, and what is the better possibility out of so many horrors? Was this kidnapping planned, or mere chance? In trying to teach her son not to fear the world, she may have lost him forever. And the evidence suggests that even if he is still alive, whatever has happened and is continuing to happen will change him forever.

Having lost her husband to another woman, Rachel begins to lose herself without her son and a sympathetic public turns on her thanks to the fuel of speculation in a constant online society. What kind of mother sends her child ahead, alone? What kind of mother is so focused on her divorce and her feelings, that she doesn’t see her child’s need? What kind of person cries one minute and then lashes out on public TV the next? The Internet forums, the blogs, the Facebook feeds, the endless loops of an overstimulated nation ready to judge and a platform open to all, all the time, wears down both Rachel and Jim Clemo, the personally involved investigator whose own sanity and judgment deteriorate as the wracking speculation feeds subliminal thoughts and motivations.

As the police continue to search, the clock is ticking. Interspersed with eerily pragmatic quotes from actual non-fiction texts advising parents with missing children, walking them through the brutal world of kidnapping (and hence killing) statistics, What She Knew is part thriller and part rending, pitiless realism.

Bleak, emotionally devastating, and visceral with edges of panic and paranoia, What She Knew is hardly a light read – it’s a worst-case scenario. As Rachel loses her son she also loses her family. Hidden things come to life and knowledge of her sister and the fabric of lives surrounding what she always thought she knew deepens the cruel certainty that you ultimately know, and can therefore trust, no one. Disillusionment permeates the text, the vivid, grainy texture of the narrative which paints each scene in that pre-dawn grey of depression. It’s hard to describe how real and painful this narrative is – sometimes far too painful. It’s the type of book that lingers in your mind as you go about your day and haunts the way you see the technicolor world around you – intimating that all those dark things you try to forget are so close to the surface, so instantly able to pull you under.

Meanwhile, the side story of Clemo, the detective with-a-heart and terrible judgment, told through the perspective of psychiatric documents, adds a level of distrust that supersedes everything. Can we even trust Rachel? Is she reliable? Is she deluded? What about this altruistic, perfect sister of hers – what is hidden behind that façade of efficiency: jealousy maybe, instability, lies upon lies?

As the narrative twists and turns the almost painful aura, that sense that time is running out, ads to the convincing pull that Ben is real and this gripping story really is too painful to be entertaining, continues to build. The traditional who-dunnit angle is heightened by all the Gone Girl­ish plot twists and Macmillian’s terse, raw prose. After having established such a solid pull, What She Knew changes the game and morphs several times, leading us down frantic paths and along stony ground until a final, fatal conclusion. We end with broken characters and words, a bittersweet moral, a semi-sweet call to action, and a sense of haunting.

What’s not quite perfect in this otherwise breathtaking, and ultimately disturbing read, is that we never actually find out what she knew. That’s the point, presumably, but it falls a little flat as everything has been wrenched, screaming and bloody and defenseless into the light except the final answer to it all: why. The revelation of the kidnapper, the reasons that are guessed at, seem trite and thrown in there after all the glorious, heart-stopping soul-searching. It’s a bit of a letdown at a high point, but even still, What She Knew has become its own world and characters and you just can’t let go or ever quite forget. Tarnished in its perfection: a little. Epic throughout, oh yes. Worth it. Indeed.