Way We Live Now, The 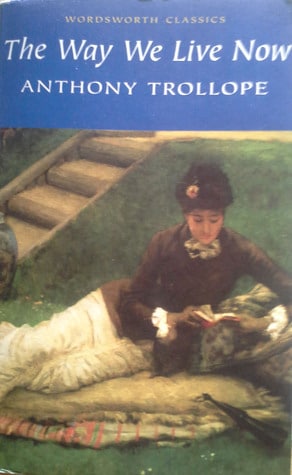 For Love or Money?

Augustus Melmotte has recently arrived in London, shadowed by a murky past and rumors. Melmotte is not the usual choice of society: his nationality is suspect, his religion unknown, his wife’s heritage dubious at best, and his mannerisms crass. Yet, he has taken London by storm because of his wealth and the potential money making railroad scheme he has brought to the fore. Haughty society, with land and titles (although very little money), is flocking to the Melmottes, turning a blind eye to their faults, seeking money like vultures looking for carrion.

As Melmotte makes his way, carving out a place in society, covering his sins with money and promises, roping baronets and gentlemen into financial schemes that are inexplicable, our cast of characters moves in the periphery. Some seek station, some love, and a very few look for answers.

The Way We Live Now is a difficult book to quantify in a neat summary. As with all Trollope’s works, this is not a singular story, but instead an exhibition of humanity, a microcosm of people, interrelated and dancing around Melmotte’s web of intrigue, who are facing their own personal  crises.

There is Melmotte’s abused daughter who throughout the tale thwarts her father’s schemes for marrying her into a wealthy but wretched alliance and instead follows her heart to the absolute worst, most usurious wretch she could have picked. This same wretch, Sir Felix, is running from creditors, hiding mistresses, and coming up with schemes to land an heiress and keep his easy life. Sir Felix’s beleaguered mother, Lady Carbury, tries to find a secure place for her son while mistreating her daughter, who refuses to marry her wealthy cousin and also follows a dubious love. Other characters work around the sides: Roger Carbury (my favorite) whose staunch love for the woman he cannot have results in honesty and kindness; Paul Montague who is trying to discard a distasteful women he is engaged to in favor of Lady Carbury’s smitten daughter; and Mrs. Hurtle, a loan American woman with a checkered past who at times helps and other times hurts those around her. All these people move together, shadowing one another, affecting each other’s destiny, dancing between greed and something nobler.

The Way We Live Now is my favorite Trollope story. There is never a dull moment, nor is there one single character who isn’t multifaceted, beset by flaws and nobler emotions, torn between what the world demands for success and what they actually want. It’s a powerful story, moving and pointed. Melmotte makes a fantastic villain, but his outward evil is not the only focus of a story that concentrates on deception and self aggrandizement at every turn. This tale is still very much a picture of the way society lives now, putting together a grey tinged picture of emotions and practicality to form an epic story that impacts every level of society, every hope, every noble deed and selfish thought, to form a captivating portrait of real people and real issues. Despite the book’s thickness, it was nearly impossible to put down and has started a love affair in my heart with the subtle yet talented Trollope.