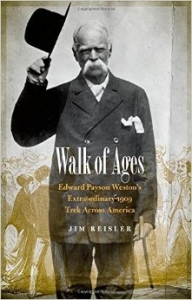 Most of today’s sports fans probably don’t realize that even before Philo T. Farnsworth invented the “idiot box” in the 1920s and long before ESPN started broadcasting sporting events in 1979, there were internationally renowned athletes who were just as famous as LeBron James or Tom Brady are today.    Edward Payson Weston may not be a household name anymore, but when he dominated the world of professional walking in the latter half of the 19th and the early 20th centuries he was an undisputed superstar.  For several decades following the American Civil War, Weston amazed the world with his feats of endurance ambulation all over the world.  But it wasn’t until 1910 – at the age of 70 – that he attempted his most amazing exploit, a trek from New York City to San Francisco entirely on foot in less than 100 days.   In Walk of Ages, baseball writer Jim Reisler tells Weston’s story in this remarkably captivating biography. 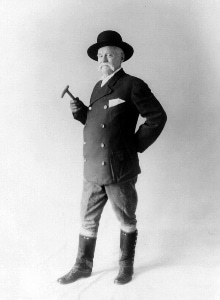 Weston poses in his stylish walking attire, circa 1909.

Nowadays, walking may not seem exciting – it’s slow, it’s tedious and not much is happening at any given moment.  But back in the early days of the United States, walking contests would generate plenty of enthusiasm.  Stirred up by clever marketing and supportive newspapers, walking competitions – like a 500 mile foot race from Boston to Washington DC – would attract thousands of spectators.  By taking on all sorts of walking challenges, the charismatic Weston was able to actually make a living off of prize money, sponsorships and speaking engagements that he would schedule along the way.  In fact, a substantial gambling industry thrived on the bets placed on such competitions, occasionally placing Weston in harm’s way as interested parties would try to influence the outcome.

Interspersing plenty of intriguing biographical information within the day to day saga of Weston’s epic 1910 walk, Reisler weaves a tale of incredible endurance.  Starting in New York City, Weston ambled through New York state and onward across the country’s midsection, often encountering crowds of thousands of cheering supporters, even in the middle of the night.  Walking at all hours, but never on Sunday, the “walkist” battled blizzards, knee-deep mud, sleep deprivation, hail storms and swarms of mosquitos as he headed inexorably westward, frequently leaving his unreliable support car behind.  Regularly managing  more than fifty miles a day – day after day – Weston often had to rely on the kindness of strangers who offered him food and accommodations along the way, reveling in their proximity to “America’s greatest pedestrian”.

Enthusiastically resurrecting the story of a long forgotten athletic superstar, Walk of Ages is a consistently entertaining and suspenseful story of geriatric fortitude.  I enjoyed it from beginning to end and from sea to shining sea.  Highly recommended for its rousing storytelling as well as its tireless protagonist, it’s an inspiring and memorable read.

Other reviews of books from the University of Nebraska Press:

Seasons of the Tallgrass Prairie