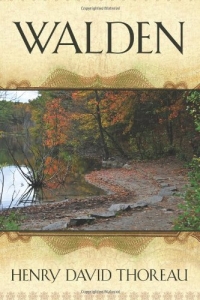 Transcendent and Tepid: Why You Should Read Walden and Then Never Read It Again

Sometimes my determination to roll the dice and accept whatever classic work falls my way results in wonderful discoveries, sometimes in painful torments, and rarely in a transcendent state somewhere in-between pain and pleasure. As an English major in college, I had many assignments which positioned me to meet Walden excerpts – all of which I loathed. The prose was self-righteous, the advice given with a better-than-you aura of complete condescension, the material dull and lengthy. Imagine my chagrin when Thoreau and his most famous work once again appeared on my reading list – this time in all of its weighty entirety. Already feeling bad for deliberately ignoring Moby Dick when it showed up as one of my reads (tossing that dice again, don’t you know!) I felt compelled to finally confront Walden.

Henry David Thoreau was a transcendentalist determined to enact a social experiment by living for two years, two months, and two days in relative self-efficiency, living off the land as it were. This is both a spiritual and a practical journey, an ode to a lifestyle many proclaim to respect and a ululation to the beauty of nature and the serendipity of true human reaction. It’s a work both beautiful and trite at times, oscillating between the transcendence it seeks and the rigor of exceptional boredom. Thoreau waxes lyrical about all manner of subjects in his pseudo memoir self-help work of philosophical and practical advice, meaning that readers need to have a strong stomach for the long haul and a desire for extreme mental exertion as Thoreau switches from scientific to spiritual to details of self-sufficiency and economy.

The narrative is divided into several chapters, each with its own focal point. The first, longest, and by far most likely to annoy chapter is Economy. Here, Thoreau goes into detail describing the building of his cottage (read, shack), all the materials that go into this construction, and the cost of each thereof. His point is that with minor effort and application of manual effort it is easy to provide oneself with food, shelter, and clothing showing that the simplified, non-rat-race life style is the only way to achieve true enlightenment and purpose.

However, while Thoreau seeks the desolation of nature, he is actually on the edge of town, about two miles from his family home. He is allowed to live off the land and provide some basic labor in order to build his shack and have use of the land. His friend, Ralph Waldo Emmerson, owns the land and grants this privilege. Likewise, Thoreau’s mother provides assistances as he “lives off the land” leaving some irate readers (yours truly) to question Thoreau’s proclamations of self-sufficiency and and his consequential disdain of the working man who is worn down by the machine. Granted, the rat-race is a mess, work wearies the soul, and as a society in general we spend most of our lives carrying about things that don’t matter yet – hearing expostulation regarding the easiness of survival in self-sufficiency from someone who only does an abbreviated experiment and is supported by friends and family leads readers to doubt the veracity of his claims. At least, self-sufficiency would be way more difficult than he projected and while he farmed incorrectly and yet still had a prolific year, this is the exception in a farming life and not the rule. Thoreau never touches on how long term difficulties and true self-sufficiency can wear the individual down just as rapidly and brutally as an overly career-conscious society.

Not to say that Thoreau doesn’t present some salve for the soul and some valid, even wise commentary. Taking out the personal “did he really, really, live this way and is he qualified to tell us how to live” question, the philosophy does have many sound elements and is even comforting, good to hear, at certain junctures. It keeps the audience thinking about what truly matters which is both beneficial and comforting, leading many moments to be sublime or, either, just plain good sense, depending.

Walden is still a mixed bag, at times presenting difficult concepts so in-depth that the language almost fails, at other times passing to give an introspection on the intense beauty of the four woodland seasons and how this reflects a person’s spiritual journey, and then there are the times were Thoreau gets off-topic on a kick, such as the pages and pages describing how he sounded Walden’s bottom and how ice was cut and transported from the pond. Yet at other times he marks how happiness and contentment is not a product of a fancy residence but an open heart, how solitude is essential and yet company desirable and equally important promoting a balance and an “all things in their season” approach. Thoreau talks about higher ideals and moral quandaries – are we truly above the animals and how would veganism take us closer to a state above bestiality, how reading classical literature is waning and needs to be returned for the edification of society, how truth resides in nature and can be discovered if only the listener is attentive, etc. etc. etc.

There is no central theme, more a flow of consciousness and a look at life through one man’s perspective. Philosophy and a back-to-the-basics idealism make Walden both a cherished piece of literature in the Western Canon and, simultaneously, a difficult book to read and enjoy. Filled with moments of serendipity and moments that will have readers nodding off, my final evaluation is, despite my long love-hate relationship with Walden, it’s still worth it. I am both glad that I read it and glad that I will never have to read it again.