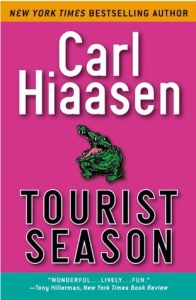 The president of the Miami Chamber of Commerce is more than just dead. He’s dead tourist style with Bermuda shorts and a plastic alligator stuffed down his throat, crammed legless into a suitcase that floats ashore with its grisly cargo. When innocuous (albeit tasteless) tourists start disappearing, Les Noches Des Diciembre (sometimes referred to as the Nachos – thank you newspaper misprint), a preservationist terrorist group, claims credit and promises further horrors should Florida remain swamped with gimmicks and people instead of reverting to a wildlife refuge where the eagle may soar free, unimpeded by condos and strip shopping centers.

Meanwhile, Brian Keyes, a failed journalist and now private investigator, is contacted when an important and beloved Shriner goes missing, and soon the links start to add up. It may just be that Brian knows someone with an axe to grind, an old frenemy who stole his girl and destroyed his career, who is now leading Noches Des Diciembre toward their final grand display of macabre power. Will Brian be able to save the day (and get the girl) all while dealing with Florida’s uniquely portrayed steaminess in this sardonic tale of journalism and consumerism gone bad?

Steamy evenings and hot sand combined with cool waters and loads of beach combing, my vacation to St. George’s Island (with the awesome boyfriend who sometimes reads these reviews – greetings!) was almost perfect, with the exception of books. Not to say that I didn’t bring any reading material (I did, thirteen books all totaled). As a matter of fact, I even got an overweight baggage fee due to said books. I just didn’t have anything beach themed, anything to compliment the atmosphere of lying in the hammock with the bf while sipping wine coolers or tickle my imagination while getting hit in the leg by a starfish (true story). That was until my boyfriend’s dad lent me this little gem, Tourist Season, with a knowing gleam, sure of success and my instant addiction to Carl Hiaasen’s darkly humorous world.

On the beach, reading surrounded by sand and surf, my laughter mingled with the screams of greedy gulls. The book is just funny, yet disturbing in its own right. It’s not every day that the beginning chapter of your chosen beach read begins with a dismembered body in a suitcase or a clinical description of said body accompanied by a child’s toy lodged in the throat. It was cringe worthy, dark and morbidly fascinating. Tourist Season started off more like a hardboiled mystery and less like a comedy, which is part of what gives those turns of hilarity, whether in phrase or in situation, the extra gut punch: we don’t expect them and we can never anticipate them. A journey somewhere between all the realms of drama, political thriller, mystery, and absurdist comedy, Tourist Season wasn’t what I expected. Heck, it didn’t even end on the note I expected. It was serious. And fun. And horribly, horribly dark. So, of course, I loved it.

Brian was a fun character, weirdly quirky in all the right ways, and excessively squeamish (or so his comrades think.) We even get a mystery involving his past and his rival, enemy journalist. Said enemy (I won’t give away the name, I’m considerate like that) is given away early. We even get whole chapters from his viewpoint and from inside his rag-tag terrorist organization which is filled with a delightful cast of down-and-outs seeking their own retribution against society. This ups the comedy and turns the focus to character/motivation driven narrative. The mystery isn’t who are the terrorists. The mystery is, who are the characters, really? What compels the arch villain, nobility of ideals or evil? One of the main stars is Florida itself, depicted in all its blatant ludicrousness. Events and schemes, while tense, are also intense on a personal level, involving the readers in the drama to the extent that we will laugh out loud when the story is suddenly broken with that classic Hiaasen humor, delivered either subtly, tacked onto the end of a serious sentence, or interwoven into the very nature of the action itself. All combined, it’s enough to keep readers involved, amused, and a little depressed too, because hell, it is morbid and the human condition is ultimately sad. Yeah, that’s right: conflict between the light hearted and the austerely dark. Impressed that I could pull that off, aren’t you?

The conclusion, read on a rainy day inside, sipping coffee and rocking back and forth as the waves crashed into the beach, was surprising, both for its odd beauty and its lasting comment. Tourist Season does jab a little moral in there on the way out, which is annoying in a way, because I wanted to 100% hate the villain, not just 98% loath him. The thing with the eagle got to me, ok? I’d certainly pick up more of Hiaason’s work and have already done a little Amazon prowl to indulge myself with a list of his available work. Atmospheric, dense in a good way, humorous, character-fueled, and tense with a good sense of humor and self-depreciation, Tourist Season is a dark ride on a crazy train. Recommended.