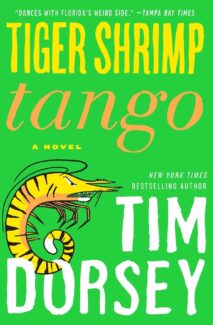 Settling in over summer in Florida, enjoying my week away from work and on the Florida beach, I was in the mood for something Carl Hiaasen-like, something with the quirky Florida verve that matched the shifting sands and sweltering sun. I ran into Tiger Shrimp Tango at a local bookstore. Its lime green cover complimented by an angry shrimp and promises of hilarity seemed just right.

The story, which is actually book 17 in an ongoing series, follows the exploits of a darkly comical serial killer and his forever stoned sidekick as they, Dexter style, target the bad guys who are running statewide scams. There are hints of an even further backstory – serial killer Serge Storms had a true love who was murdered in conjunction with one of his past schemes. To this day he is still haunted by her death and intent on avenging it. While the backstory, which later results in an assassin trailing Serge, never seems quite clear, it’s obvious that it will somehow dovetail into his strange schemes as he picks off the Floridian scam artists one by one. 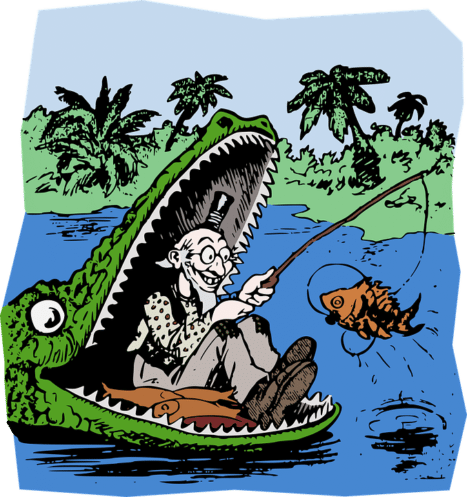 Tiger Shrimp Tango fancies itself elegantly amusing. Serge and his wacky, ever crunk cohort enact elaborate schemes to pick-off each of their victims. There is a trick with cigars, murder by ostrich, murder by lobster, homemade napalm, and endless bizarre conversations with their terrified victims as the two clueless killers hint at an out that never materializes. The novel fancies itself darkly witty, ala the first murder in Breaking Bad, yet this cleverness soon wears on readers as the plot bogs down into what can only be described as torture porn. No, nothing is exceptionally graphic, yet I inwardly cringed as we were expected to laugh. I suppose the ability to make the dark humor work was there, but the endless repetition, the seemingly mindless slaying of characters (all of whom are completely interchangeable) by Serge and Coleman (the sidekick), who themselves are stereotyped and repetitive, mired the story in a series of unrelated and psychedelic vignettes. Tiger Shrimp Tango oscillates from boring to rambling to bizarre to disturbing.

Eventually, another character is added to the mix late. A young woman who lost her father to the violence of a scammer scheme gone wrong. She half teams with the killer duo, enabling a weak ending where Serge and the assassin come face-to-face over brunch. The action occurs quickly, is hard to follow, and ultimately leaves readers feeling that the entire book was just a pointless series of unconnected murders and endless loopy dialogues.

Although I started in summer, I finally finished Tiger Shrimp Tango in winter, having heartily avoided it many times as I sailed through other, more purposeful and enjoyable books. The tale is only memorable for its overdone wackiness and then not in a good way. Tim Dorsey is not an author that I intend to read again.