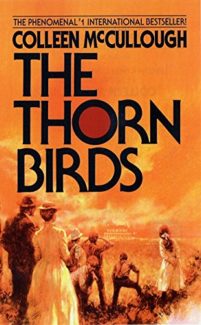 A Classic Story of Broken Innocence and Forbidden Love

The Thorn Birds, known to many from the epic mini-series of the early 80s, is a story of forbidden romance, heartrending choices, love verses duty, spiritual love vs earthly love, and the rugged splendor of Australia. It begins with the Clearys, a poor family living in New Zealand, barely keeping ends together as progressively more children are added to the brood (we count seven at the high point). This is not a childhood of playing and school, but one of instant labor and chores. Among these children there is only one girl, the fiery haired Meggie, least loved by her stoic mother.

The family has more problems than their lack of means. Something happened long ago to Meggie’s mother, Fee, once an aristocratic lady, now little more than a dutiful drudge for a farm laborer. Meggie’s father, Paddy, is a cheerful sort but between him and his oldest son something old and hateful brews, threatening to split the family. And yet, this is simply life and the way things are.

When a telegram arrives from Mary Carson, Paddy’s sister and only living relative, the family suddenly sees that a life of hope, maybe even one of plenty, is possible. Mary is old and very wealthy, running a multi-million dollar empire and successful sheep farm named Drogheda in Australia. And she wants Paddy and his family to come and help. It seems the set-up for a new life, for a potential inheritance, for an escape. Never mind if Mary Carson is cruel. Never mind if she is playing her own games.

Once arrived in a new world and way of life, Drogheda’s deposed priest, the ambitious Father Ralph de Bricassart, takes an interest in Meggie, one born mostly of pity but with something indefinable, something he denies himself, sleeping just underneath the surface. And so begins a lifetime of pain, in the kind actions of a priest who has spent his own lifetime lying about his motives, translating love of power into love of God. As Meggie grows into a young woman under his wing, something grows along with her naïve love and Mary Carson, never willing to be sidelined and always desiring to destroy the haughty, handsome priest, hatches her final plan.

McCullough’s drama reminds me quite a lot of The Poisonwood Bible in that it is a story encapsulated in a harsh place that looks at a family, growing older and more jaded as the years come and go. There is also that bittersweet, critical look at faith and God, perhaps not as harsh as Kingsolver’s, and an inspection of the human heart and its sometimes hidden, sometimes bare motives.

Drogheda, the sheep farm that becomes more than Meggie’s escape, takes on a shape and meaning for us just as powerful as Tara from Gone with the Wind. Around Drogheda everything else moves as the book journeys outwards, even does some serious globetrotting towards the end. It’s here though, on this ranch, that the genesis really exists and here that the characters are invariably pulled as they rotate around their own desires. The thirsty lizards, the dusts and the droughts and the storms, the rampaging rabbits, the cowboy-like lifestyle of the herders and caretakers, it all paints a portrait that like Kingsolver’s portrait of the Congo makes us love a place we certainly don’t want to live. The beauty is in the ferocious, untamable wildness and that very ferocity fascinates readers and keeps them glad of their cozy beds. 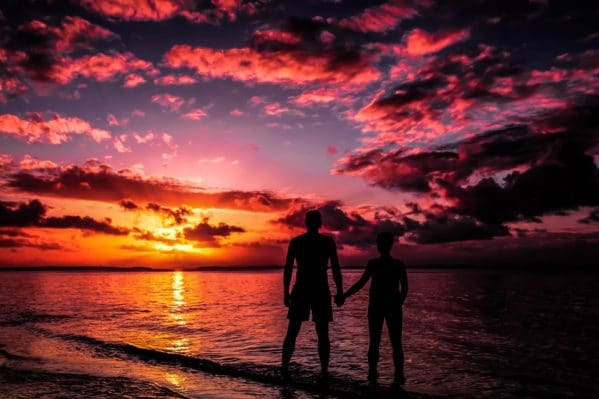 Meggie’s story, starting with her girlhood, takes us through her life and even into her children’s lives. It’s the building romance, the possibility of the consummation of something so forbidden yet evidently right, that keeps readers hooked into the tale. The romance, however, is not the only thing. We have Mary Carson’s scheme, for one, Farther Ralph’s spiral in power, the various natural disasters that hit Drogheda, the continuing internal Clearly family drama (what is wrong with Fee, why does Paddy hate his oldest son, etc.), and eventually we have WWI. Ralph and Meggie, though, and their slow dance of lust is at center stage, especially as Meggie seeks to escape the man she loves and cannot have in a marriage that yields surprising torment (and produces some of the most poignant and memorable moments in the narrative).

Where the magic begins to fail is after the central point of the romance. The author lets the story go into a slow decline and Ralph and Meggie, ever our stars, recede to non-existence as Meggie’s two children, Dane (likable) and Justine (a truly irritating character) take center stage. From here the story becomes a weird mélange of these two characters’ lives. Dane pursues the priesthood in a way and with a purity that Father Ralph, in his world-weary, cynical ways could never do. This in and off itself kind of fits. It’s Justine though and her attempts as an actress and on-again-off-again romance that swallows the later fourth of the book and makes it into something amorphous and even a little dull. The conclusion attempts to come back around, but by then Ralph and Meggie are shadows of their passionate, troubled selves. Loose emotional threads are only vaguely gathered and we are left at the end without ever really seeing our central character’s reactions to the long reaching repercussions of their ill-fated decisions or even to the aging aspects and betrayals of each other. After having shared such a journey, this bland ending of two lovers growing apart, bitter but no longer really passionate about it, leaves us cold after so much sweltering Australian warmth and so much turmoil. Still, The Thorn Birds is such a powerful drama with so many epic moments that readers chose to forget the last fourth and leave remembering Meggie and Ralph at the height of their passion when choices, however terrible, could still have gone either way.