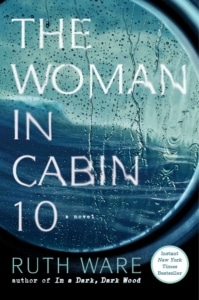 Gaining on such blockbuster bestsellers as Gone Girl and Woman on The Train, Ruth Ware’s The Woman in Cabin 10 is an edgy and claustrophobic story in classical Agatha Christie tradition. We have a paranoid, unreliable narrator, a confining cruise ship, and a cast of suspicious high-life adventurers and millionaires – all with strange, sometimes sinister mannerisms.

It begins when Lo Blacklock, commitment phobic alcoholic, finally gets her big chance to review the sumptuous cruise ship Aurora while her illustrious fellow journalist colleague is away on maternity leave. It’s ten years in coming and a chance that landed in her lap more from lack of planning than merit. She must not, cannot, blow it. Add to this the fact that she might have accidentally broken up with her longtime boyfriend, and you’ve got a tense situation that has all the trappings of a self-fulling prophecy on the stormy, open seas. But there’s more . . .

The day before diving into the world of cruising, clumsy Lo is attacked in her own home by a mysterious intruder. The worst part of the event was her own helplessness – a confusing and embarrassing weakness of will that leaves her nightmare ridden and hitting the bottle harder than ever before. Now she doesn’t even have the solace of sleep. At night, the intruder returns, again and again to her waking imagination. Nowhere, not even in her own home, in her own bed, is she truly alone. She’s not safe.

Sleep deprived and jittery, Lo’s own sense of personal failure forces her to complete her assignment, her big chance, and board the Aurora. Despite all its small scale yet sumptuous beauty, it’s still just a floating coffin, small walls closing into small walls, space a lie of perspective. Surrounded by hostility, social climbers, cut-throat competition, an aggressive ex-boyfriend, and her own ever-present low self-esteem, Lo is not in a good place to secure her future as a journalist.

When the woman in the next cabin is murdered and tossed overboard late one night, wakeful, paranoid, career-destroying Lo is the only witness. The crew, the captain, and even her fellow opulent passengers, however, not only deny foul play, but the very existence of the mysterious woman in cabin 10 whom only Lo has seen. Relentless, Lo soon becomes the crazy person on board, following her gut and her instincts – dashing away her formerly weak and cowering self. Only, Lo just might be getting involved in something bigger and more sordid than she could ever imagine and her newfound stubbornness could be the ticket to death.

Interweaving atmosphere with who-dunnit charm, The Woman in Cabin 10 follows the paranoid atmosphere of a moody thriller veering into unexpected twists and turns with ruthless villains and hare-brained protagonists with destructive complexes. Like Agatha Christie, we have the scenario of one lone woman against the world, essentially stranded with a strange cast of could-be-killers and the background sense of a ticking time bomb.

Of course, readers have seen it before – Gone Girl and Girl on a Train. What’s unique here, beyond the creepy sea atmosphere and Ware’s eerily excellent ability to make readers claustrophobic and frightened, is the lack of a killer confrontation and the sudden reveal of the entire scheme only to switch to something different – an escape that is just as unique as it is effectively terrorizing. The Woman in Cabin 10 knows you’re coming with certain conceptions, and it delivers what you’re looking for, but it also strays from the expectations just enough to keep readers on their collective toes.

Some readers, perhaps disenchanted by a unique novel style which is quickly being repeated and dashed off to pump up the bestseller list, say that The Woman in Cabin 10 is just another copycat in the long line of Gone Girl wannabes. And it is . . .and who cares? The book is fast paced, breathless, atmospheric, and complex without getting tangled in its own plot threads. It’s not on the same par as Gone Girl (I mean, let’s be honest, what is) but it’s a fast and addicting read with enough spark to make it stand out from the other Flynn imitations. Yes, Lo is unreliable and drunk (an obvious inspiration from Woman on a Train) and no, characterization is not top of the list (although for my part, I easily empathized with the traumatized Lo). Agatha-Christie-like, it’s more about the mystery than building sympathy for any one person or fleshing out the potential could-be-killers. Plot and mood are the star here and that works just fine for me. I’ll be coming back to Ruth Ware and anticipate even more macabre mysteries from her talented, twisted pen.