Sound of Gravel, The 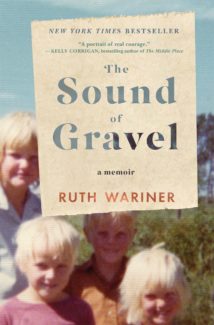 A Memoir of Polygamy and Child Abuse

From the grainy cover image of bright blond headed children, squinting against the fierce light of an obviously desolate place, The Sound of Gravel sets a mood torn between the fear of abused childhood and the hope of eventual escape. Told with straight-up honesty tempered by a sense of compassion, Ruth Warner reveals her own life as the thirty-ninth child in a poor polygamist Mormon cult near the Mexican border.  Her famed and long dead father, murdered by his own brother, was the founding prophet of this poverty-stricken settlement. Ruth’s mother, an idealistic, ignorant convert, remains just as devoted in her new marriage to Lane, a shiftless albeit “faithful” Mormon. Lane’s general ineptness and overarching disregard soon grows into an insidious invasion of childhood innocence, a call to action that first depresses and then fortifies a coming-of-age Ruth.

Ruth somehow manages to waver between the rage of abandonment and the softness of sympathetic love. The confidential yet conversational style of the dialogue invites readers into a rare sort of sharing. We aren’t told often so much as shown, invited back into an evidently painful period of a life in transition. Stranded somewhere between the desire to die and the instinct to live, Ruth is able to look back on brutality with a circumspect outlook which marks her as godlier than her supposedly devote community. The brevity of the words, descriptive as they are, showcases truer (and more complicated) emotion than mere telling. Life itself jumps off the page, shrouded in seemingly simple statements – the fleeting nature of a glance, the broken shards of a false word, the scent of a burned-out trailer, the sound of a rattling TV pouring through the background of a life devoted to escape.

The Amazon write-up, and indeed the Book of the Month write-up, don’t really prepare the reader for all that is to come in The Sound of Gravel. Jumping back and forth between America and Mexico to grab welfare and leave before social services arrive, Ruth’s transitory life seems to have only one solid touchstone: deprivation. Surrounded by disabled siblings whose inbred genes lead to problems ranging from severe, violent schizophrenia to a permanent mental inability to mature, Ruth is the true mother and only responsible person in a home littered with exposed wiring, mice, sharp nails, ruptured boilers, and other dangerous and easily avoidable obstacles. While Ruth’s mother is bickering with her Sister Wives or reading yet another romance novel in bed, Ruth manages the household and along the way, grows into a strong woman – even though she is deprived of her own childhood and, eventually, her own sense of self-worth and personal boundaries.

What’s amazing here is that with such a life, Ruth is never blinded by bitterness. Her feelings range from anger to forgiveness and it is this complex juxtaposition of what she knows compared to what she sees on those all too few trips to her ex-polygamist (and therefore outcast) American grandparents that takes the memoir beyond an examination of injustices into a call to action. This call, however, is for Ruth alone. It remains and is always her story, her strength, her fear, and ultimately, her loss and inspiring ability to bury the bad and the good together, as is, memorialized and un-judged. The personal pain grows and yet the author lets us stay along for the entire ride – the painful, ripping birth into something new that begins with her own mother’s grisly death. It’s never an uplifting story, but yet there is something in the end like hope, although far darker and sadder. Ruth survives and she goes on to be all right, but it’s never the happily ever after you want. It’s life, and passing through the darkness leaves its wounds. Ruth, we know, can never heal, merely coexist with the pain and move forward. Perhaps it’s this brazen honesty of having been scarred, continuing to be haunted, and yet moving forward because it’s all that life allows which makes the ending so poignant and ultimately relatable yet devastating. The Sound of Gravel is a memoir you won’t forget, and once the title is explained in all its simple, symbolic brutality, the ringing hollowness of finality and the irrevocable past will remain long after the final page. Ruth Warner bared all and once you read her words, her story will become a waking part of your own life.