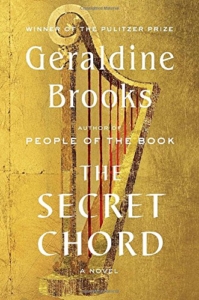 King David: A Mystery or a Monster?

Ploughing into chilly weather, cozy sweaters, and holiday season galore, my final book club read for the year (we don’t meet in December) was the one I had been anticipating the most: Geraldine Brooks’ The Secret Chord. The fictionalized narrative is a look into the secret world of King David, renowned historical and Biblical figure, progenitor of the line through which Christ was promised and born. Being religious and being raised religious, I was excited to see the chaos and drama of David’s warrior life and his later political and personal judgement errors reenacted even more tumultuously and violently, through an introspection on who this enigmatic figure and ancient man could have been.

Anyone who knows the story of David, even if only a tiny portion, knows that the plot and the tension are already there, hand-in-hand, a larger than life tale split between devotion and bloodshed, prophesy, lust, betrayal, and finally, retribution tinged with legitimate regret. David rises from despised shepherd through his love of God and warrior status to defeat the giant Goliath, befriend a paranoid king, later assume kingship, and form the nation of Israel from warring factions. All the while, David’s own greatness is offset by his colossal errors, the least of which is not his relationship to Bathsheba and plan to kill her loyal husband.

Anticipating a full exploration of the Biblical mayhem and the torn figure of one very much flawed man with a surprisingly good heart, the distance and reserve of The Secret Chord and its tendency to concentrate on the conniving, monstrous side of David to the exclusion of all else was a disappointment, taking a great storyline, already hand delivered thanks to the Bible, and breaking it down into a seedy sounding History Channel snippet (without the aliens of course).

The story takes place through the eyes of Nathan, David’s controversial and much feared prophet. Having witnessed the slaying of his family at the hands of the young warrior, Nathan is hit with the voice of flattering prophecy and instead of being added to the body count becomes a surprisingly devoted, albeit conflicted, member of David’s loyal entourage. From here, the rest is (haha) history. We watch David willing to do “whatever it takes” to conquer those opposed to him, emerging a blood drunk war lord. Merciless, pitiless, devoid of humanity, scene after scene of carnage reigns with infants being spitted on pikes and other grisly atrocities. It’s enough to make readers automatically hate David – his ruthlessness comes alive here and Brooks does not shy away from the viciousness of war. What doesn’t come alive is David’s alleged humanity and his supposed relationship with God, the key factor for his no-holds-barred killing and later rise to the throne.

David’s dry Machiavellianism and Nathan’s subconscious unease are low key in the unfolding of events which are, admittedly, brilliantly detailed. Gory to the extreme, readers may not be able to feel with the stiff characters but we have no difficulty in seeing the landscape and smelling the congealed blood of the dying. Needless to say, not the best holiday prelude for my book group who were unanimously enamored with Brook’s talent at painting a picture and disenchanted by the emotional stasis of the narrative.

Continuing as David rises through the ranks, slays Goliath, and gains the temporary affection of King Saul, our key character takes a backseat to the repercussions of his own selfishness. Involved in a supposedly deep sexual relationship with his best friend, Saul’s son, Jonathon, David’s unrealistic obsession is a cause of concern in his new marriage to Jonathon’s put upon sister: Mishal. Indeed, Mishal gets a rather large and twisted backstory and by the time you finish it, her sparkling eyes looking out at the reader from the dark room of her later years, antipathy towards David will have flared into violent hatred tinged with the knowledge that it’s all so unrealistic. Could anyone be such a monster and yet be a legend and a continually beloved figure, even while doing such heinous and evident kowtowing to his own power-drunk selfishness? Brooks’ David is a sociopath.

David doesn’t get on with those around him, or at least not in any way that feels genuine or emotionally complicated, but what about his relationship to God? God raises him from lowly shepherd, despised by his own father who sent him tending herds in order that he might die, to a beloved of the divine. There must be some relationship here, some beauty in an otherwise ugly and for the most part disinterested soul. But really, there isn’t. Indeed, God isn’t even a character in the story and is rarely mentioned. How then can He be such a powerful influence and so relevant to David’s life and the development of Israel?

David’s own charisma, merely told of and never seen, and his ability to politically unite warring factions with seeming ease never makes it to the page and one of the most important elements of Israel’s establishment and David’s kingship (and one might add one of the most interesting story points) is ignored as though it were of little to no significance.

Eventually, the tale winds down, having gained less and less force. The staleness itself is helped by the overly formal language and the reticence of Nathan, our narrator, to drop his guard and actively share his feelings as David progresses from brute warrior to King to adulterer to enfeebled old man. David’s good points are non-existent, his very real end-of-life repentance a mere flickering shadow, his son Solomon, interestingly, a far more dynamic and intriguing character. With a trail of broken bodies and crippled hearts, David ends his life and his story a miserable, hateful figure devoid of humanity. The story is entertaining in its sensationalism – all the sex, murder, war, and political intrigue – but as far as touching your heart or titillating your imagination, The Secret Chord is easily forgettable.