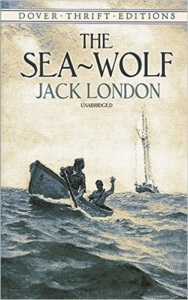 Mutiny, Kidnapping, and Fear: A Sea Adventure with Spirit

A weak-willed aristocrat, a sudden shipwreck, an amoral captain, mutiny, murder, and multiple kidnappings all combine to make The Sea Wolf a high adrenaline sea adventure. Humphrey van Weyden admits that he’s never done a day’s work in his life, but he feels protected by his status and his advanced schooling. He knows a lot – and that’s what counts, his book learning vs. practical experience. He stands on the shoulders of giants, as it were, and Van Weyden can talk philosophy with the best, including everything from Nietzsche to John Milton. However, Van Weyden’s reclusive smarts won’t help him now that he’s been “rescued” from a shipwreck by Wolf Larsen, captain of the Ghost, a reckless seal hunting schooner. Wolf Larsen is determined to beat Weyden into submission and show how his dog-eat-dog theory builds a man with legs he can stand on of his own accord. Refused sanctuary, Weyden is forced to be a cabin boy for The Ghost. Along the way he is faced with violent crew mates, rigorous physical labor, dangerous conditions, and the leadership of an insidious man who’s self-learning and worldly wisdom are only matched by his force of cunning and indefatigable lust for power.

Demoralized that his own firm ideals cannot overcome the Captain’s wily arguments about the absence of a God, which necessitates self-tailored morality and selfish promotion, Weyden soon capitulates. He agrees and participates in the basest of betrayals against an increasingly mutinous crew. Everything changes, however, when a famous woman writer (and fellow member of the elite intelligentsia) arrives shipwrecked and Weyden must wonder if the Captain’s Übermensch inspired outlook is truly as strong as his own. Thus begins the battle for survival and while not a true fight between good and evil, the ideals employed are just as gripping as the edge-of-the-seat action, high seas danger, and inspiringly modern romance.

Combining existential crises with swashbuckling adventure and glints of extreme violence, The Sea Wolf is its own breed of novel, and certainly very different from London’s famous Call of the Wild. Literary, heady books often have a tendency to forget the compelling nature of a good plot. Books with lots of tension and plot twists tend to leave out the soul and the mind. It’s a common problem and one that, frankly, I didn’t think had a solution. Add both together in the form of a fast paced novella, and I would tell you that the idea is very grand and also utterly impossible. And it seems like it should be – but it just works in such a captivating way. The characters are neither protagonist nor villain, but something more subtle and in between. Van Weyden isn’t the hero we want (or need – points if you get the joke) but he’s a realistic portrayal of a flawed person with a good mind but very little willpower to back up his academia in the real world. As the narrative moves forward, Weyden starts to build those legs Wolf was talking about, and his dynamic progression lends credence to the introduction of Maud, who furthers the idea of escape and grows alongside Weyden.

Wolf Larsen is admittedly sadistic, yet somehow charming and his sheer force of will, excessive hard work, industrious intelligence, and general curiosity make him a villain that we don’t love to hate so much as we just, well, grudgingly respect. Had I been a teenager and read this, I would totally have had a crush on Larsen, despite his horrific actions. Something about his grit is simply appealing and while readers collectively shake our heads at his downright evil, we maintain a weird sort of hope that he’ll escape justice. Perhaps its his sheer doggedness and strength to choose a path and continue it all the way that is somehow, if not worthy of accolades, demanding of a weird sort of nod to the stamina of the human spirt. Plus, Larsen is honest from the beginning about what he is and what he believes. The unusual nature of this honesty, and the way he sticks to his sordid beliefs, make him a strong, vibrant character.

Rollicking in a stormy world of learning vs. practicality The Sea Wolf is a fast read that combines everything audiences love about both the internal and the external struggles of gripping narrative. If Larsen’s smooth words don’t mesmerize you, then the mutinies, onboard schemes, and appearance of a deserted island (you just knew there had to be one, right?) will. A classic with kick, Jack London’s inspiring novella has created a host of wannabes (including Captains Courageous) but despite all the various reproductions, nothing can surpass the original. It doesn’t take long to flip through the pages, but the story is one that never quite leaves us. After reading, in the dark of night, you can still hear Wolf Larsen, whispering his obscene plans at you, the proverbial devil on your shoulder. Unequivocally recommended.