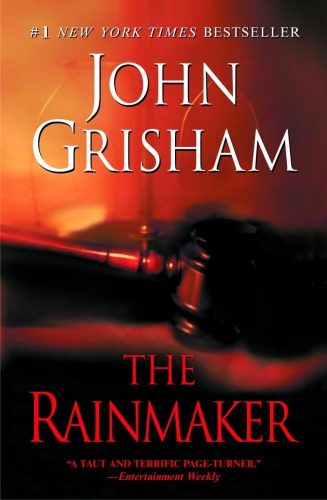 The Everyman vs Big Insurance

Rudy Baylor is about to graduate law school. The world is his oyster. He already has a decent job lined up – unlike many of his fellow graduates who are still hitting the pavement, desperate for work in a city already swamped by eager lawyers. The only blights on his perfect horizon are the impending bar exam and his dull senior semester, working with a radical do-gooder professor who is invested in senior law. Said professor is making them take their first swing at lawyering by providing free advice and work to the local senior citizens, and Rudy’s first several clients are more than a little surprising. He gets a secret millionaire widow looking to disown her recalcitrant family and a poor family who want to tackle Great Benefit, the insurance company who refused their dying son the bone marrow transplant that would have saved his life.

As Rudy’s senior law classes start to get more interesting and more complicated, his perfect life starts to fall apart. He loses his promised job and through a series of misadventures winds up broke, living by doing back-breaking yardwork in order to rent a room, and taking the only job in town – one with an ambulance chasing lawyer with ties to the seedy underbelly of strip joints in Memphis. The mighty have fallen, but meanwhile, the case against Great Benefit has grown. Rudy may be young. He may be inexperienced. But he has just stumbled onto the case of a lifetime, and as he watches his client die, the one who could have been saved, a certain sense of justice takes him through the trial of a lifetime against the biggest law firm in town and the greedy insurance industry.

This is my first encounter with John Grisham. Despite being an adamant reader, I just haven’t picked up one of his books before. The premise of this one drew me in because honestly, who doesn’t want to stick it to the big, evil insurance companies who care more about profits than humans?

Rudy’s clients, the Blacks, are poor, ignorant, downtrodden. Easy targets for a conglomerate who thinks they will slink away at the first nasty letter. But the thing is – the Blacks are right. There is no legal reason that the insurance company deprived their son, Donny Ray, of life-giving care. It’s indemic of a shifty industry that hides behind tiny print; with nothing else to do and no prospects, Rudy has read and reread all that tiny print. And he has them.

Meanwhile, in between the pathos of a struggling student and his first clients, Grisham flavors the story with some humor and more than a little intrigue. The widow makes for the comedic relief, but the intrigue comes from the underground figures of Prince and his lawyer (and Rudy’s employer) Bruiser. Bruiser’s agents, including Rudy’s new sidekick, haunt hospitals and sign-up clients fresh off the gurney. It’s half amusing and half horrifying and gives us a glimpse into an unforgettable world peopled by characters that are at times repellent and at other times geniuses in their own sleezy way. Of course, it’s also a wakeup call for Rudy, who never learned anything about this side of the profession in the classroom.

Meanwhile, Rudy meets a battered young wife in the ER, and starts to form a devastating attachment. That was the only part of the story which I didn’t like. Considering how smart Rudy proved, how he functions as the careful underdog that routes the advances of those older and far more versed in the law, this falling-for-someone-else’s-wife plot just doesn’t work. It seems, at least in my cynical view, that the lady in question is relying on Rudy’s navietate to get her out of a sticky bind and to protect her from consequences. Maybe there is really romance here, but I don’t see it, and the side story often got on my nerves.

But the courtroom scenes, which are kept simple enough to follow and be gut-punch quick, still have that fun legal-thriller tumult as one after one the villains loose face and our embittered but righteous hero finds ways to thwart the foxes at their own game. It’s fun and if you’re listening to the audio book, be prepared to cheer out loud (or manically laugh) at certain points and be shocked into stunned silence at others.

I really loved The Rainmaker and am happy that John Grisham has joined my never-ending cadre of authors to follow. Now, onto his next legal thriller!