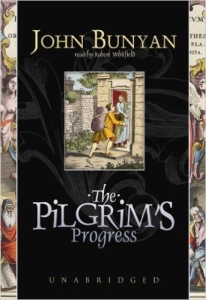 Tirelessly journeying through my one woman quest to read the classics (aka, a trip through the land of everything I should have read yet somehow haven’t), I alighted on John Bunyan’s The Pilgrim’s Progress. My method is one of random selection from an Internet generated list, leaving myself with no personal choices and no way to “get out” of reading certain works (personally, I live in dread for when War and Peace pops up on this list.) I wasn’t thrilled to see Pilgrim’s Progress even though I consider myself to be a devoted Christian. It just sounded so, well, preachy and tedious. Its very oldness put it at risk of the typical hell-fire-and-brimstone Puritanism which I personally hate and believe to be damaging to Christianity in particular and religion in general. Yet, the selection was made and I kept to my unwavering bibliophile devotion – and I was certainly glad of it.

The Pilgrim’s Progress is essentially two books in one, following an allegorical nature which, oddly, reminded me of The Phantom Tollbooth from my childhood reading assignments. Graceless, renamed Christian later, lives in the City of Destruction and a literal heavy burden on his back gives him the premonition of doom. He’ll do anything to escape the wrath that will descend on the city and anything to get rid of that burden, including leaving those behind who hold him back. His journey is a quest for respite and salvation and, along the way, he is thwarted by monsters, demons, Satan himself, and fellow travelers enmeshed in the city life, such as a certain secular Mr. Wordly Wiseman.

In the second portion of the narrative, Christian’s wife (Christiana), her friend Mercy, and Christian’s children, left behind in the City of Destruction (obviously symbolizing the world) change their minds and decide to follow in Christian’s footsteps. Here, the journey changes from allegory to more of a straight discussion and the women and children have an easier trip with more heavenly assistance, plus the ability to remark on how things have changed through the ages (such as persecution).

Moving from the City of Destruction, through the Slough of Despond, up Mount Sinai, through the Valley of Humiliation, into Vanity Fair, across the River of Death, and finally into the Celestial City (Mount Zion itself) both journeys complement each other with the second story answering some key questions which arose in the first.

The tale is a hard one both in ways I had anticipated (its unyielding accordance with the truth and calling a spade-a-spade frankness) and in ways which I hadn’t (the layers and levels of the allegory and the interwoven messages). It’s a brilliant book, easy on the surface, yet with all the layers of an onion and the ability to open our eyes and minds further and further each time. The names of the people and villains (Mr. Feeble-Mind, Mr. Ready-to-Halt, Christian, Mercy, Much-Afraid, Giant-Slay-Good, etc.) pull no punches and direct the reader in the way that we should go, making interpretation easy (on the surface). And let’s admit it, it’s fun too. Who doesn’t like a story with monsters, castles, giants, journeys, and plenty of danger and adventure? It’s Phantom Tollbooth for exceptionally wise adults.

On the surface, the very openness of the allegory and the forthright narrative, especially in the first journey of Christian’s, seems simple enough to present to a child and the arcane language is anything but, providing easy and fluid, with just enough of that old world formality to weave the dreamlike aura of the tale around the readers. Yet, underneath, this is a story that requires full concentration and a certain amount of spiritual and worldly maturity. It wants you to think that it’s an easy book, but it’s not, and that is what makes it so beautiful and so intimidating.

I listened to the unabridged Blackstone Audio edition of the Pilgrim’s Progress and while the usual quality of Blackstone was in full form, I regretted not reading an actual print version. Listening to this allegorical tale while commuting on the Interstate didn’t do it justice, or fully allow me to absorb all of what was being said. This is a story where you read, pause, re-read, reflect, and move slowly forward. A tale with no chapters which moves unbroken and seamlessly, The Pilgrim’s Progress requires full attention and a contemplative setting. It’s certainly worth it both for literary merit and for the complexity and truthfulness of what it says.

For those on a similar classics kick, I admit to having the proverbial advantage, having been a Christian my whole life and once, devotedly and with much difficulty having forced myself through The Confessions of St. Augustine. So, with this background, I was enabled to pick up some of the more esoteric references (although, I admit that I cannot account for how many I missed). If you’re coming from a different background or looking at this work for its literary merit, a study guide might be helpful in giving you the full low down on what Bunyan is doing here and how multilayered it is – but it isn’t essential. This is a story which can be enjoyed just for its words and its journey and is accessible in meaning and intention to all. Your own personal knowledge and outlook will, no doubt, effect what you take away from here, and in this way that narrative reveals itself anew and differently to each person, which is probably why it’s not only a staple of Christian literature but an acclaimed classic. Highly recommended.