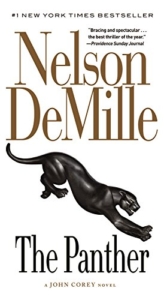 Torpid Terrorists Take Over or . . . How to Forget a Plot

Deep in my latest eBay mystery audio book lot, I discovered the much-acclaimed Nelson DeMille’s The Panther. Almost immediately, my dad snatched it from my towering to be read pile, sailed through its hefty 20+ audio discs (832 pages worth) in less than a week, and praised it on a nearly daily basis. As a result, my fiancé and I decided to start on the massive compendium of discs on our 10+ hour Thanksgiving drive. Little did we suspect that the emotionless, dry reading, the tissue thin plot, the continually moribund witticisms, and the plodding storyline would cause us both to nearly doze at the wheel. A book project that should have been wrapped up after the 20+ hours of round trip holiday driving, listening to these discs drug on for four plus excruciating weeks making our usual car trips a total terror. But I suppose I’m getting ahead of myself.

The story begins with two snarky FBI agents, the talkative and overly confident John Corey who has an insult and lame joke for everyone and would literally, and stupidly, laugh in the face of death. Accompanying him is his barely there wife, Kate, who instigates the storyline and then fades into a blur of inconsequence. Desiring an adventure and expecting to further prove themselves, especially after Kate’s previous run in and shooting of a CIA agent, the couple bickers their way across the ocean to Yemen – the land time (and God) apparently forget. Amid the squalor and AK toting denizens, Corey’s constant disrespect is only eclipsed by his more ludicrous motive: to kill an American born Muslim extremist terrorist (a Bin Ladin wannabe essentially) nicknamed the Panther. Mingling with other agents and CIA cooperatives, the mission is ominous in that Corey and company are bait. Corey suspects that there is a lot more to the entire assassination plot than meets the eye and with a swaggering unconcern enters no-man’s-land looking for the rotten core buried in the mission’s heart.

The Panther, the novel’s arch villain, is portrayed as a ruthless enigma, cruel and depraved having learned America’s ways and turned it back on her. What motive changed him from ideal citizen to terrorist? What are his plans now and how does this half-crazed man run a collection of such powerful people? Good mystery with intriguing questions. Pity that absolutely none of them are ever answered and the villain himself appears so rarely and so stereotypically. As a matter of fact, The Panther is more of a background plot device, rarely evoked, than a pressing threat and his very remoteness diminishes both the reader’s terror and loathing. But it gets worse.

With The Panther MIA, where does the book go? The answer is nowhere, very, very slowly. If pace and action packed adventure, both of which are promised in the back-cover blurb, are your thing and your expectation, prepare to be disappointed. Instead, we spend a lot of time getting introduced to Yemen and Corey’s “wit.” Touring around some dusty markets and having some inane conversations with personality devoid props (i.e. the other members of his mission) we plod, and plod, and plod. Hundreds of pages go by or, if you’re listing in the car on a long-haul drive, endless successions of lengthy audio discs, none of which had the good grace to just break already. Nothing happens but set up and getting there. Kate vanishes into the background and its all Corey with his borderline-bigoted mocking of every culture he encounters and every person he meets along the way. By the conclusion, his non-stop commentary is more than enough to get readers rooting for the terrorist. Come on Panther, you can take this big mouth guy down and end, please end, this book.

Finally, within the last 10 percent of the otherwise very predictable “story” (I use this word lightly and in Corey fashion, sarcastically) a plot twist occurs and there’s some fairly decent action and betrayal. The wanton destruction of innocent lives and the Rambo styled “I’m about to die but aren’t I just so cool” continue, however, and any enjoyment we could have picked from the veil thin excuse for a plot is ruined by our extreme hatred of the characters.

The stultifying pace and inevitable boredom coupled with a loathing for the only character who got some characterization was enough to keep my fiancé and me switching out to music selections during our drive, just in the interest of staying awake. What was supposed to be an intense edge-of-the-seat thriller with relevant introspections on modern issues and events was instead a dive into the tedious realm of questionable commentary and offensive jokes. Not recommended.