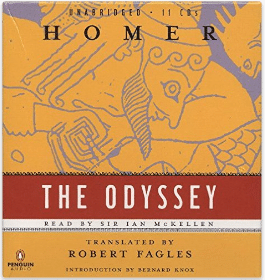 It’s that time again – my reading the classics kick (aka reading all of the books I should have read in school, yet somehow missed). This time when I rolled the dice to pick a random classic from my list, I was both delighted and terrified. The Odyssey is the second oldest book in the Western Canon (the oldest is the Iliad), supposedly written sometime at the end of the 8th century BC. Everyone knows the details of Homer, blind poet, creator of The Iliad and it’s somewhat sequel The Odyssey and how both works began as oral traditions finally being recorded as epic poems later.

The story is also well known, following on the heels of the ten-year Trojan war, the Greek hero and battle commander Odysseus turns to go home but his crew’s actions evoke the rage of the gods. Meanwhile, as Odysseus struggles for another ten years to get home, his wife Penelope and son Telemachus are beset with a hoard of abusive suitors, intent on forcing Penelope to give her husband up for dead and accept their advances, passing Odysseus’ fortune and household on. The gods have other plans, however, and bright-eyed Athena has a personal interest in Odysseus, the man of pain’s, enfolding story.

And there you have it, an ancient epic of betrayal, war, adventure, the gods, and the search for home. The narrative is only initially terrifying for its very oldness, it’s antiquity evident in phrasing and thought, making naïve readers wonder if we can become invested in a drama from so long ago. The answer is – it’s in the Western canon for a reason and it is frequently referenced throughout both classical and popular culture for a reason. It’s got just as much heart-pounding action, sickening gore, thrilling adventure, terror, and temptation as your wildest dream (or any Die-Hard) movie. The old nature of the phrasing and language soon becomes second nature, Robert Fagles’ brilliant translation capturing the brunt nature of the speech, the power and persuasion of each character action. The Odyssey is the IMAX experience of the 8th century and if you thought everything in “olden days” was boring – well, then you are missing out on what I consider to be the best action adventure story ever told. So there.

All your favorite stories (which you may or may not have known came from Homer are included in this tale): the instance of the Cyclops and Odysseus escaping him with the help of some sheep, the tense journey between Scylla and Charybids (love those sea monsters), the sun sheep of Apollo, the gory story of Agamemnon, a cannibalistic island, a seductive witch-goddess, an overbearing sea-nymph, and a venture to the netherworld to meet with the spirits of the dead. There is tension and suspension in each story, plus a surprising amount of sex and death. If this were a movie, it would be R rated.

The intervention of the gods, specifically Athena and Poseidon provides that crucial mystical element of mythology, merging the supernatural deities with a very human nature and sensibility, making them oddly relatable and terrifyingly austere all at the same time. Add in some real monsters, some riddles, prophecies, and myriad cunning women and bloodthirsty men, and you have all the ingredients for a fantasy adventure that puts Tolkien and his ilk to shame. Are you getting the impression of how widely I adored and became addicted to this story?

What’s strange about my addiction and amazingly fast progression through the unabridged audio book edition is the fact that I actually hate poetry. I know that isn’t especially mature of me and makes me somewhat a fraud as an English major and holder of an MA in writing, but it’s the simple truth. I don’t understand the stuff and I find the structure distracting, cloying in its very cleverness. Say the phrase epic poem to me and all I hear is “really, really long poem that goes on forever.” I knew the fun mythology stories (well, some of them) from The Odyssey, which caused a little interest, but my loathing for poetry was more complete and vibrant than my curiosity. I was surprised then when listening to the audio book that the narrative read like a story and not a poem. Yes, there are some charming turns of antique phrases but the story reads more like a novel, allowing readers to submerge themselves in the drama of the tale. The unabridged audio book version I listened to, read by Ian McKellen, helped me get past the form and enjoy the content. McKellen’s expressive reading captured the beauty of the classic and yet emphasized the gritty, hard nature of war, survival, and scheming. I passed through the eleven CDs in under a week, mourning that the story ever had to end. I went from apathetic to amazed, counting this now as one of my favorite novels. Time to add a hardbound edition to the library for the sake of posterity and so I can re-read and re-live this adventure again and again. Highly recommended.