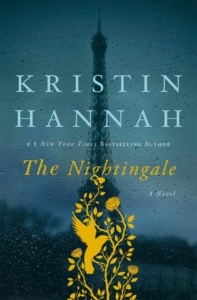 The Secret Wars of Women

Back to the book club after a long day of work and the serpentine DC traffic: it was an intimate gathering, attendance small this time, a room containing women ranging across all age spectrums and experiences. Kristin Hannah’s The Nightingale was perfect for this situation, this cozy library room with women comfortably scattered around an industrial school type table, laying out their stories, their fears, and their family’s past as an especially vibrant sunset stained the room’s large window. Picked partly for its acclaim and for its serious concentration on an often forgotten portion of WWII, Nightingale is both a fictional depiction of real war events and an empowering call to feminism. While the men fight in the trenches and encounter the hell of Nazi Concentration Camps, we’re far away with two sisters in France, trying to “survive” the occupation and ostensibly make everything work until the men come back to reestablish life.

First, there is Vianne. The older sister, life has given her everything including a loving husband and an escape from an absentee father. Vianne is concentrated on her daughter and on her domesticity and when her husband is captured in a POW camp and a Nazi caption billeted at her house, her choice is bigger than survival and morality. Can she, who has always been reliant on rescue, be the strong one now? The smart one? The daring one? What about her responsibilities as a mother? How far can she or should she go in the name of what is right when her own family is at stake?

Meanwhile, Isabelle, Vianne’s younger sister, is still attempting to find her place in the world. Discarded by her father and shoved aside by her busy sister, Isabelle’s teenage rebellion spikes just as the Nazi invasion takes place. In love with drama in only the way of a child transforming into adulthood, Isabelle discovers both a well of strength and a dangerous passion: The French Resistance. Will her youth and naivety put her entire family in danger or is Isabelle, willing to sacrifice it all, the true hero?

In the meantime, the typical black-and-white world of Nazi invasion enters a startling shades-of-grey plane. Vianne’s billeted captain, Beck, is not a monster and yet – she’s found him standing at train stations, whip in hand, scourging the growing crowds of concentration camp victims. Conversely, Beck also helps hide her Jewish neighbor, speaks lovingly of a family at home, and appears to dislike his “duty.” As Beck and Vianne grow closer, the narrative shifts and we wonder if the monster can become man. Whatever Beck may be, good, bad, or something in between, he brings home the reality of war and dictatorship to the common man and examines it through a new and quite terrifying lens. How does something like a Nazi get created and how can such a creature subsist day by day? It gives going with the flow a whole new meaning while also pointing to the tragedies of wartime and Vianne’s desire for a shoulder to cry on.

Both estranged sisters experience the war differently, one fighting subtly at the home, the other brazenly casting her lot and love into the Resistance. The soldiers in the trenches are not the concentration here and neither are the camps which, mercifully for squeamish readers, cover minimal page space. Instead, it’s the unsung heroes, specifically the wives, mothers, and daughters left at home, whose hidden stories come to life. Two separate women, two very different sisters, one war, many choices, unlimited ways to be both a hero and a coward.

The Nightingale is captivating for the events it depicts specifically the elements of war that get very little screen time. Small moments such as a starving Vianne awakening each morning to the rich aroma of coffee from her Nazi “tenant” to Isabelle’s rebellious airmen who refuse to take orders from a woman and save themselves, paint an everyday picture of friction, fear, and the spirit of overcoming. The characters are hardly perfect: not all decisions are noble (especially in the case of Vianne) and not all are even advisable. It’s a tattered portrait of broken yet reforming humanity and while the novel is nothing but exceptional bleakness a spirit of defiance is captured in the lively, descriptive words of each page.

In my book club (you knew I’d get back to that eventually right?) each woman was moved in a different way and our discussion about the book (and its literary value) was set aside for personal reflections with discussions around which character each reader identified with more. Who thought that they were an Isabelle, brave, foolish, and out there vs who identified themselves as the less exciting, albeit equally as brave Vianne, afraid, dedicated, and moral in the daily tasks? This discussion morphed even farther with each woman sharing her own “war stories” as it were. Most memorable was one lady who noted that the novel’s central framing technique of an aged grandmother reliving her memories of the war and telling the story evoked her own childhood. “If only I had listened more to my grandmother then, who was desperate to tell her stories. I just didn’t understand. So many stories, now lost,” she lamented and we all fell into awed silence as she recalled what she could, making what seems like a long ago war brutally alive in the small confines of an innocuous library.

And while I too enjoyed the novel, feeling drawn into the events and complex situations, the characters somehow seemed a little less real to me. Both Isabelle and  Vianne felt conversely too dramatic and too  static – the language and descriptions veering almost into melodrama at times. The breadth of the story covers a lot of time and events quickly and while there is a deep emotional element, I often felt that, especially with Isabelle, it could have been more fully portrayed. Scenes of torture are almost straightforward with a character who is too assured that she will never crack and yet too hyper-aware of the statistical possibilities. A sojourn in the concentration camp is depressing yet simultaneously unreal and emotionally plodding. The right things are said – the expected things, but I  didn’t altogether sink into the atmosphere and feel that what I was reading was truly real or occurring real-time as I flipped pages.

Of course, overall this is a minor quibble in the grand scheme of The Nightingale and everything it accomplishes and while I wish the characters were a little more accessible, they are still truly incredible for what they represent and for what they make readers conjure. We now realize something about the further complexity of WWII and both a citizen’s and a woman’s specific bravery and responsibility in the face of an overwhelming and deeply psychotic enemy. Visceral, bloody, shattering, and altogether bleak, The Nightingale still soars, reminding readers that even in the darkest of times there is hope in personal strength and the fortitude of good will.