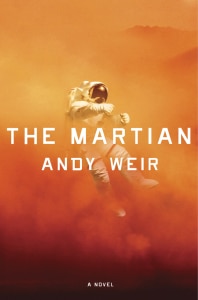 Left for dead, stranded on a barren, inhospitable planet in the middle of a sandstorm, Mark Watney is convinced he will become the first person to die on Mars. When the storm ends and he is not dead, Watney employs his full sardonic stubbornness and cynical sense of dry humor to defy the odds, one day at a time. What will kill him first? The Hab and various life support systems all of which are ageing and were possibly damaged in the killing storm? Or will it be hunger and thirst – the slow death. Or, worst of all, will it be simple human error?

A straight-forward sci-fi adventure, The Martian astounds with its weighty list of Michael Crichton like technical knowledge and its innate humanity when pressed against dire situations. Watney at turns will have you laughing, crying, and gasping. A scientist to the core, his cool progression through the daily challenges create character. We see the strength and the open acceptance of the dire possibilities that must populate the mind of someone in love with such a fantastic yet risky job. We also see the keen, biting intelligence and let’s face it, the delightfully sarcastic humor brings the bleakness of the red planet to our backdoors and begs the question: just how much could you survive? How would you react in the face of certain death and obviously insurmountable odds?

There have been lots of debates about the validity of Andy Weir’s The Martian. Many proclaim that the narrative is well researched yet other articles, after the success of the movie, just love to point out every little foible. Guess what folks, it’s fiction and Weir creates a world so detailed and realistic, I legitimately do not care what is real and what isn’t (like the arguments I’ve heard about sandstorms not occurring on Mars – um, well guess what, in this book they do.) The science of Jurassic Park has just enough truth to be an entertaining theory without enough veracity to, you know, go build a dinosaur (which is a pity). What matters is that the author, and hence the characters, are smart and the world is consistent as is the logic. Admittedly, much of the engineering details go way, way over my head but in a good way. It puts me in the place and fleshes out the situation and makes me believe in Watney and the bizarre predicament he has somehow gotten into. It also makes me ache for his survival possibilities.

Not to say that being scientifically accurate is wrong per say, and if you’re into sussing out what’s fact and what’s fiction in this addictive little journey, have a mosey on over to astronomy.com’s article on the science of The Martian. The additional research just adds to the atmosphere and cleverness of this novel, so do check it out and keep dreaming about one day seeing that red planet for yourself.

Unlike other novels, The Martian isn’t about friends in dire circumstances, love interests, or flashback nostalgia as a way to “build” a story.  The Martian is a story of survival, technology, ingenuity, and you know, space. Not to say that the characters here aren’t strong – they are. It’s Weir’s decision not to go with the tried-and-true that makes them so. These characters feel like scientists, top minds in their fields, and while they remain emotionally relatable, they are ultimately stable, strong, and analytically dependent. It’s a great look into the life of individuals who are so driven. The story provides what feels, at least, like an accurate portrayal of someone devoted enough to their career to literally leave the world. Plus, it makes the survival drama so much more pertinent focusing on the pain of daily life and knife-edged hunger, along with the indignities of, um, organically growing your own potatoes.

The tension is visceral and the narrative keeps up a breathless race against time, starvation, and breaking machinery. This isn’t the sleeper sort of story you cuddle under the covers for some before bed reading, but the edge of the seat drama, combining epistolary/journal narrative with an occasional omniscient viewpoint and dashes of first person intrigue back at NASA.

Weir really went for it, and style, structure, character, and most importantly of all, the intricacy of the complex storyline are engaging from start to finish. Here’s hoping that Weir writes again! Highly recommended.