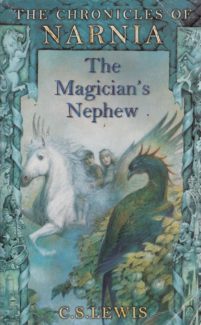 I’ve long been hearing about the excellence of C.S. Lewis and have indulged myself in multiple religious and allegorical texts penned by him, from The Screwtape Letters to The Problem of Pain and more. The Chronicles of Narnia, however, have sat gathering dust in one of my many bowed shelves. I’ve grown up hearing references to the beneficent lion, Aslan, who represents Christ in a world where animals talk and a dangerous witch roams abroad. Finally curious to see what all the talk was about, I picked up the series and determined to start at the very beginning, chronologically, and so came to this short, standalone prequel work which details the creation of Narnia and the entrance of evil into a brand new land, intended for only good.

The Magician’s Nephew starts with a style, somewhat reminiscent of Beatrix Potter – hulking Victorian abodes with secret passages and adventurous children who find a sub-world, far more beautiful and richly detailed, beneath the oblivious hustle of adult life. The story begins with Digory, a lonely little boy worried for his mother who is desperately ill and near death. Digory is under the doubtful care of his Aunt and mad-scientistish Uncle and is more than delighted when new next door neighbors deliver a girl child, Polly, around his same age. The two, trapped in the grimy atmosphere of London and equally friendless, soon begin to stave the worry off by playing together. Only, they’re being watched.

Digory’s Uncle Andrew, a man of many ulterior motives sees the luckless children as his best opportunity to test out his new magical rings which have the power to send (and possibly return) the young charges to the “Wood Between Worlds” where miraculous pools allow them to venture into other worlds, both old and new. Uncle Andrew has sent many animals before, but he is now seeking an entity that can work its way back and provide descriptions of all that has been seen and encountered – without any personal risk to himself. As his literal Guinea Pigs, the children’s desire to work their way through a confusing multiverse of worlds and realities back to their home, will enable the devious Uncle Andrew to ascertain the true extent of his half magical, half scientific prowess. Only, as with all evil schemes, something goes amiss. When the children accidentally introduce a terrible, world destroying witch back to their home realm, and then beyond, the story takes into account actions of guilt, pride, and selfishness, while providing our stunned children with opportunities for exploration, redemption, selflessness, and trust.

With Lewis’s ability to breathe life and vivacity into any description, the dreary yet secretly magical world of London soon gives way to the strangely peaceful Wood Between Worlds with its beckoning pools into other realms. The sense of adventure is overlaid with an appropriate amount of fear and homesickness, making readers instantly believe in this wondrous story and the two child characters who, through the machinations of an evil sorcerer, are sent on a grand adventure where animals talk and lions breathe beautiful worlds into existence.

As The Magician’s Nephew progresses, shiny eyed adventure overlaid with the all too human sense of fear, the spectacular peace of the Wood Between Worlds leads to an encounter with the dying world of Charn – a Mars like scape with shifting red dust, a red tinted and dying ember of a sun, and ancient ruins scrawled with the essence of everlasting tragedy. When denizens of this desolate planet, forever frozen in place in their beautiful raiment with their haughty high nosed faces shining in a death that’s not quite complete are discovered, Digory sets an ancient curse into motion and resurrects a beautiful and completely amoral witch – Jadis – the woman who through a single utterance of blackest magic has destroyed her own realm for the sake of pride and is now searching for a new, fresh world to rule. A world such as Digory and Polly’s.

Equal parts danger and remorse, post-Charn the story escalates and all the senses are heightened. And it is here, in the attempt to amend evil, or at least out-run it, that Digory, Polly, the devious Uncle Andrew, a random chap with his horse, and Jadis encounter Narnia, mid-creation. Here the story comes full circle as we see how evil is introduced into a good world, which hasn’t even completed creation before being besieged by an enemy. Aslan, the wise and loving talking lion, creator of Narnia, is the only one who understands what has occurred and what the talking animal denizens of Narnia will now have to overcome. Can Digory and Polly, along with the hapless cabbie and horse, understand the full import of the fall from grace and trustingly follow Aslan’s instructions? Can they embark on the greatest adventure yet while weighted down by remorse and the knowledge of destruction? Can Digory himself, who suddenly sees a way to cure his ailing mother, choose good over personal gain?

Exciting, heartfelt, poignant, imaginative, and quirkily funny, The Magician’s Nephew sets the stage for a world that is equal parts beautiful and doomed. The overarching Christian ideals and morals of Lewis’ elegant pen are obvious and woven with wisdom and compassion. And yet, despite the serious nature of everything that has occurred and what is to come, the entire story keeps an upbeat and hopeful air, mixing adventure into the vast sense of forgiveness. Aslan is in control after all.