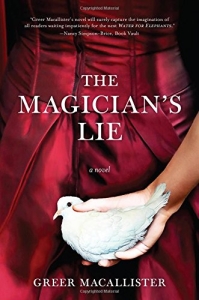 Scheherazade with Magic and Bondage

Ada Bates was born to a transient life with a fickle, love struck mother and her lover presiding over the girl’s limited education and stringent life. Ada’s father – the abandoned husband – remains a mystery and even an uncertainty, Ada’s one blue and brown fairy-eye making everyone secretly wonder. While her mother’s chance at happiness, fruitlessly thrown away in the dreams of an affair are long gone, Ada’s talent for dance, specifically ballet, offers a better hope for the future. When one of the powerful Biltmore’s request Ada to perform at their mansion, it looks as though her dreams are about to transpire, only there are darker forces at work, forces her own mother turns aside from and does not acknowledge.

Living off of the “generosity” of a farmer and his wife, working for them when available and taking charity when not, the young son, Ray, terrifies Ada with his whispered promises and his intense interest in her uncanny healing abilities. When an attempted rape goes wrong, he decides to take revenge in another manner and this brutal course will forever change Ada’s life, transforming her into a runaway, discarding home, family, and name.

Later, Ada becomes the Amazing Arden, a new and powerful woman, a female magician in a time period where the idea of a woman wielding power over an audience, especially over men, is shocking. Improper and yet something that cannot be looked away from, Arden weaves skillful illusions to bring magic alive, basking in the glow of admiration and the ability to recreate herself and form her own surroundings. Even love, although admittedly one with some strange difficulties and a viciously deceptive past, enters Arden’s life and just as it looks as though the past has died and the future burns brightly, Arden is once more cast in the role of victim. Was her image as this powerful woman all a lie?

Now with a dead husband and a policeman convinced of her abilities to murder, Arden must tell her story in one night and convince him of her innocence. Otherwise, her life will be forfeited. The question is, will this lovely, bold woman continue to tell the truth as her tale becomes darker and far more difficult to believe? Did Arden really murder her husband, using her stage act in a final severing that even her crafty illusions cannot weave back together?

I originally ran into this strange, twisted little book with its crimson cover stained by the innocence of a hidden dove and was transfixed by Book of the Month Club Guest Judge Whoopi Goldberg’s remark on the book: “Because she was a woman, she couldn’t saw a man in half…And I thought, oh, some stuff never changes.” The idea of a powerful female magician was intriguing, especially as it related to the late 19th early 20th century timeline. The premise became even more intriguing when murder was added into the mix leading to a  bizarre inquisition held between a dying policemen performing his supposedly final duty – to bring a murderess to justice. The Scheherazade-like nature of the book’s frame and the uniqueness of the topic, plus Whoopi Goldberg’s visceral recommendation, intrigued me. I dove in.

The tale both disappoints and doesn’t, a weird mélange of the completely excellent and a strange gap of that indefinable something that was just missing. There was a hole where the greatness of the book was hollow and it doesn’t entirely make sense because I cannot point at one element or moment where I said, “there, that is it, that takes me out of the picture and makes me see myself reading fiction instead of being in the story.” But, I have theories.

Part of the problem may be the frame itself. Split between straight, unorthodox telling, Arden is tied to a chair through the entire book, being interrogated by the policemen and when we return to the moments of them together, as we frequently do, it feels forced, as though the author is searching for something to do with her bound character who, because of the very setting of the scene itself, cannot do much.

Meanwhile, Arden keeps up a dialogue that is rich and exuberant, titillating and shocking at times, yet straight forward, bearing all emotions and in a way, negating them by the very casualness with which she releases them. Her blunt, forward descriptions of sex don’t fit with the timeline and while the sequences are evidently meant to show her marked different-ness from the women of the time and from the time frame itself, they serve only to separate her more from her world and make her “too large for life.”

The pace shifts between the slowness of telling and the slowness of long, drawn out memories, punctured by the  staccato slashing of sudden violence and tension. The slow moments provide long lulls that are beautiful, dreamy, and yet strange in that here we are, in this moment, with time spooling out and Arden at risk for her life. Why then this languorous, back to the beginning storytelling which doesn’t address the dire nature of the situation and seems casual about the plight of the character who is relying on this woven story, whether real or not, to escape certain death. The sense of tension, the need for answers, the immediacy, is sacrificed for a storyteller’s aura, which isn’t an entirely displeasing thing. . . just a weird choice. Further marking the weirdness, the tale begins slowly, with the feeling of oodles of time and those slashes of sudden tension do not appear, at least markedly, until near the end when everything is a whirl and a breathless dash to finish the narrative.

But let me step back a moment – the writing is stunning, magical itself, old world and modern combining to create a vibrant atmosphere where the tricks and illusions, so elegantly and simply described, shine brighter than the interior lives of the characters. Jarring this dreamy surrealism are the occasional encounters with Ray, time elapsing in such a manner that readers become confused about the story and where it is going. It isn’t until near the end that it becomes apparent that Ray was no red herring and is indeed a character intended to stay and to drive the narrative (which is in some ways surprising since so many other plot threads have by then arisen, each of which seems more relevant than a forgotten, suddenly restored past.)

The story transitions then from sultry romantic/feminist drama to a dark, torture-scape with a beleaguered victim in a nightmare situation and the shift once again throws us out of the elegance of this otherwise vibrant world. It’s not the situation itself so much as the sudden acceleration in which it arrives and the almost glib manner in which it is glossed over, Arden’s emotion being just as steady and detached here as ever. She burns on the stage and yet her own interior life, so rich and filled with story, seems dulled in comparison and it’s somewhere in the presentation, somewhere in the monotony of her reciting all of this from a chair, somewhere in the choice of a slow, detail focused pace suddenly transplanted by a breathless whir of things blearily happening, that takes an otherwise electric story and short circuits it into fragmentation of meaning, style, and intention. The conclusion delivers readers with what we think we want (given new revelations) but doesn’t explain how we got there. None of the questions are answered, at least not in any meaningful way. And while we now know whose chopped up body instigated the investigation and who wielded the axe, the nerve center of that lost and desperate moment is absent, the unsaid in the tale settling more with readers at the end than all of the revelations. In the end, it’s an interesting story, a good one even, but only half a story at that and while the ride through this world was fun, it won’t linger with readers long afterward.