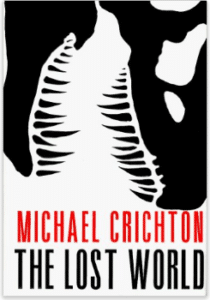 Following on the phenomenal (and multi-billion dollar) Jurassic Park novel and accompanying blockbuster movie, Michael Crichton, forced by publishers and the pressure of an adoring audience, regurgitated pedagogy and plot in The Lost World. I venerated all things Jurassic Park as a child, later discovering the visceral edge-of-the-seat novel that inspired the film franchise. The latest edition to the movie series inspired another visit to one of my favorite novels and after re-reading Jurassic Park the reminiscence felt incomplete without hashing my way through the sequel yet again. Maybe, just maybe, my first reading of Lost World (during my teen years) had been too harsh and too informed by unrealistic expectations. So, with the latest movie still hot off the reels and my excitement once again re-ignited, I went into The Lost World a second time.

The story once again involves a group of cynically clever paleontologists and researchers, hampered with two brainy/geeky computer whiz kids stranded on “Site B,” the secret factory floor where Hammond’s genetic dinosaurs were breed and kept before transport to the main island. Undoubtedly left dead in the first novel, Ian Malcom has a soap-opera like recovery which Crichton shrugs off with no explanation, effectively admitting that yes, this is a re-write and no, he’d never intended to resurrect the concept. Embittered by the events in Jurassic Park and consumed with a need to spout evolutionary extinction theory in-between long, technical dialogue, Malcom is convinced to come to Site B, once again risking his life with dinosaurs. Dodgson and the remains of In-Gen are fast on the wake of this discovery and Malcom and team want a chance to research the dinosaurs in a natural habitat, unveiling the secrets to their extinction. Also on the island is Malcom’s old love interest, Dr. Sarah Harding.  Throw in two unlikely stowaway kids, and you have the formula to once again create the danger and situational hazards of the first adventure.

Crichton has never been exemplary with characterization, his novels instead thriving on science, tension, danger, and epic plot twists. The story is truly the star and the danger engendered, usually by advanced science on the loose, works as both a warning call and a fascinating, albeit incomplete, education on current hot button issues ranging from global warming to genetic engineering to bio-weaponry to nanotechnology and beyond in Crichton’s stunningly prolific career.  Jurassic Park itself wasn’t imbued with characters that were particularly life like, or even empathetic, yet they served the purpose and the high action, high gore, science gone mad was more than enough to keep audiences tantalized and terrified.

This time around, however, we already know what the stakes are, what danger awaits, and what the results (i.e. lots of gory death and near misses) are going to be. While in the first book the disaster was a surprise and was engineered in such a way that it was believable that a particular group of scientists and tourists should be abandoned in a park with dinosaurs the group’s knowledge in The Lost World destroys our belief that they would rush into such a precarious situation. Malcom, in particular, was essentially killed in the last novel yet goes to Site B with little to no apprehension. It’s more the Titanic syndrome in that the hubris of those in power underestimate nature and evolution yet . . . eh, it’s a stretch and isn’t well developed enough for us to buy into the sudden need for a vulnerable crew with untested equipment abandoned in the Costa Rican jungle.

Added to the unlikely circumstance of the plot is the terribly tedious pacing. Whereas Jurassic Park had bite in more ways than one, The Lost World spends the first two hundred odd pages getting ready to go to the island. We have discussions about car and trailer creation, ponderings over the island’s dinosaurs and what they will reveal scientifically, vague shenanigans on the In-Gen side, and a lot of people getting ready to go on the trip. By the time our rag-tag (and easily forgettable) group lands on the island, readers are in desperate need of some dino action. Unfortunately, the initial island time is spent in further set up and a slow progression of equipment being described, moved, used, and worried about. When the dinosaurs do make an appearance, it is also slight and insignificant at first, various blurs seen from the high hide in the distance. Meanwhile, Malcom is in full professor mood and sadly, it’s not cool science like it was in the first book, but instead an unconnected string of wonderings without any formal ending or structured nature. Even the science seems tired of itself and ultimately not interested in anything more than in just getting the story done with already and the publishers appeased.

Admittedly, however, even when Crichton is lamentably asleep at the switch, he still has a unique verve that draws readers into the created world, however poorly constructed. When we do finally get to spend some necessary time with violent dinosaurs, namely my two personal favorites, the raptors and t-rex, the story regains some of its magic. Compys (recall the second movie in the series) and even a chameleon dinosaur (used in the latest Jurassic Park treat) even make prominent and spooky appearances. It is these moments toward the conclusion of the narrative in which the story finally feels somewhat comfortable with itself and ready to start. The action increases and then it’s just stellar Crichton carnage.

Sadly, the sudden acceleration in plot and purpose grinds to another unexpected halt in a conclusion from left field where the author, after experiencing an exhilarating boost, once again loses his focus and drive to bring this story to some sort of meaningful conclusion. In the end, the characters in danger are removed via dues ex machina and Malcom gives a two page lecture on evolution and extinction that doesn’t tie in any of the scientists’ questions proposed early or answer the great mystery of the dinosaurs’ demise.  Serious Jurassic Park fans (such as those of us who had entire elaborate childhood playtimes built around dinosaurs) will still want to read The Lost World for the good moments. Coming in with low expectations, however, is critical, as is the knowledge that this offering is a for-the-devoted-fans-only production.