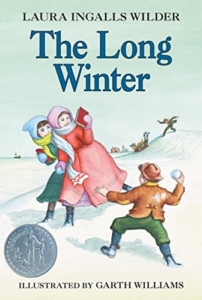 The sixth book in the Little House on the Prairie series, The Long Winter is hard to forget. Remaining a favorite of mine through multiple readings from my childhood until now, the cozy homespun nature of the series combines with a gripping and tense narrative. Weaving in fewer elements of fiction, Laura tells the story mostly as it was including moments of near-starvation, extreme deprivation, desperation, and all-out transformative defeat.

In the ruthlessly hot August of 1880 far out in the Dakota Territory, Laura is now 14 and more than aware of her family’s continual struggles, especially Pa’s. Determined to help, she volunteers for all the “un-womanly” work of harvesting hay and trampling it down. Despite Ma’s propriety, the desperation of the Ingalls’ ever waning luck leads to her reluctant agreement, and with this undertone of the family’s diminishing resources and fragile durability, the chill in the Long Winter arrives long before the storms.

Behind the waving fields of flaxen hay and across the rippling dusty prairie, through the overgrown slough, there’s an unsettling feeling. All the birds are migrating early and the woods are quite. The muskrat house in the slough is denser, with hard packed dirt walls so thick that Pa is both amazed and deeply afraid of what they might portend. Finally, the kind warning of an old Indian about a rough winter, one that comes at the end of three stints of seven years, leaves the townsfolk quaking and explains the absence of any game and the expectant silence of nature.

After nearly freezing to death in their rickety shanty where the snow blows through cracks in the walls and the season’s first early blizzard piles the Ingalls’ sleeping children in drifts large enough that Pa must shovel the girls out, Pa decides to follow instinct and move back into town for the winter. Starting in October, eventually lasting all the way into April of the next year, the long and brutal winter swirls with blizzards which last two to three days and arrive one after another, blocking supply trains. The hardworking Ingalls family slowly transitions from a cheerful outlook to bleak endurance as their hardy pilgrim faith erodes into listless grief. Day after day the girls twist their supply hay into ropes for kindling to keep from freezing to death and grind the remaining seed grain in a coffee mill to make bread. Several times a day Pa fights through white-out conditions and building-high drifts to tend the animals, risking his life in what soon becomes an ongoing, ever repeating cycle of blistering cold and gnawing hunger.

As The Long Winter progresses, the fortitude of this family and their determination continues to impress and encourage readers, yet there is something desperately sad here. For the first time, the Ingalls are truly broken. We’ve seen Pa loose hard earned hand-built houses. We’ve seen disaster, blindness, fever, and a pestilence of locusts wipe out the family time and time again. This winter, however, seems to have done the trick and the truth of Laura’s openness here portrays the vicious side of her supposedly cozy life. It’s all work here, day after day, and the effort builds nothing. The grinding, the hay ropes for burning, the desperate treks into town, the clearing of railroads which just keep piling with snow, and finally the desperate search across the prairie for the rumor of a farmer with food creates a repetitive mélange of dismal grey days and the enervation of near-death.

With a true sense of risk, and a certain festering anger, The Long Winter is the first Little House use of multiple view-points. Not only do we follow Laura and her forced imprisonment in the freezing house, but we see through Pa’s eyes as he searches through town for food that is long gone. We’re even in Almanzo Wilder’s perspective as he goes across the plain on a desperate journey to save both his seed wheat and a starving town. The Wilder brothers’ wealth and stacks of golden pancakes likewise cast a pall across the narrative as their cozy good life is contrasted with Pa’s desperation and his one completely uncharacteristic, shocking ultimatum.

Concluding with the final ending of what has indeed been a long winter, the story leaves readers mesmerized and chilled. There is a high sense of tension throughout and ruthless honesty from Laura who, despite everything, still manages to paint the hardships of her life with a broad brush that includes coziness, gratitude, and an awakened adult sensitivity to death. One of the best Little House books, The Long Winter is certainly a different flavor of the cozy prairie series as readers awareness grows with Laura’s own.  Despite having read all of the series many times (and the following Rose series) I am already anxious to start on the next book, caught up once again in this unforgettable family narrative.