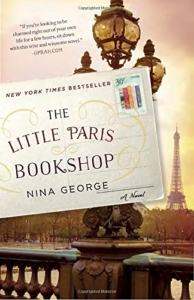 A Literary Physician Heals Himself…

When someone in my book club mentioned reading about Nina George’s bestselling novel concerning a literary apothecary who can match soul sick people with the books they need, we all roundly voted it in as the August read. Ever since then, I’ve slowly been checking off the months, excited to finally get a sample of a book I already knew that I would love. From the cover to the description to the elegant, soul-searching reviews of all those lucky readers, everything guaranteed that George’s narrative firmly embodied that ethereal spiritual connection between fiction and humanity, revealing the therapeutic nature of literature and reading. It was a perfect mélange of cozy and serious, an eclectic book with a sense of style and an underlying atmosphere of delicious quaintness.

Finally, after months of thinking about it, checking off books on the list just to get to this narrative, it was my chance to read and experience the wonder of literary refinement and blushing Parisian nights. I was armed with copious cappuccino and a fervent foreknowledge that the tale was going to be more than just a read – this was going to be a game changing novel. I was fully ready to be effected, transformed, and remade by the power of George’s luscious words and from the first sentence, the seductive tint of the melancholy language and the portent of love and loss had me enraptured. Mentally, I was back to my teenage years where I clutched paperbacks to my chest and started misty eyed out of the window, embodying all those bookworm stereotypes I ardently disavow.

It was with wonder then that my appreciation and easy, early recommendations to co-workers changed over the days and then weeks. The depth and poignancy of lyrical writing crossed a line and soon became drippy sentimentalism. The Paris flavor transformed from evenings spent at cafes with insects crooning twilight songs to the “bread, love, and beans” flavored melodrama of B-rated low budget foreign films. I fought this realization, clinging to the beauty of the words and the certain something that you have for books you’ve just anticipated for so long. Soon, however, I realized that this was no story, but instead a step back to my days as an English major in an endless literary theory class where meaning was broken down so far as to completely destroy narrative and authorial intent.

It all starts with Perdu, the owner of a floating book barge who, although emotionally closed (one could even go so far as to say emotionally constipated), is able to instantly key into the deeply personal dilemmas of his customers and proscribe just the right book. It’s all done with the hokey flamboyance of a story that really should be way more self-conscious than it is. Perdu’s sudden lectures to complete strangers, coupled with his unparalleled intuition are of course at odds with his blindness to his own situation – and the glaring obviousness serves to deliver all the foreshadowing we need. Soon, after discovering an old letter and meeting a neighbor lady that he nearly becomes intimate with, Perdu is going on a journey where the physician heals himself: he’s seeking out the husband of his married lover to lay the past to rest and come to terms with grief and loss.

In an overboard, almost mocking rendition of supposedly fluid French morality, the complicated love-affairs and polyamorous relationships coupled with poetically mushy undying love and endless grudge holding create a stew that soon becomes a sludge of unbelievable incidents and overdramatic fealty. More characters join the book barge’s progress into reconciliation with the past. A man driven to find his engaged one-night-stand partner from 20 years ago and a new author with writer’s block become Perdue’s touchstones as he gradually reads through the diary of his now dead lover and discovers her true reason for leaving him.

Meanwhile Manon (formerly mentioned lover) is represented through her diary as she discusses how wanting two men (her husband and Perdu) feels like it should be wrong, and yet she has so much love to give and different needs which are met by both men. Making the situation even weirder, Manon’s husband knows (and approves) of her long running affair and he is involved in her decision to contact Perdu towards the end. The two men, of course, will meet in the climax to have a surprisingly fast conversation where love of Manon overcomes jealousy and the ravages of time. Everyone will then become disgustingly happily-ever-after as they wallow in literary metaphor and the universal conception of self-forgiveness after an exceptionally grand pity party.

What’s amazing, however, is the fact that readers keep reading and, despite the caricatures who serve as our characters, still maintain some interest in the narrative regardless of its inherent goofiness and complete disassociation from reality.  It’s the vibrancy of the writing itself: winding sentences with a breathless, summer-kissed melancholy which despite the flaws we see within the story itself nevertheless enchant. There is no good characterization (which in some ways is so typecast and overdone as to be ironical) or even good story pacing (we’ve started on the journey twenty years too late and are therefore stuck in a purely mental drama) to keep readers going. It’s the sentence structure itself. While the sentence may be relating something unrealistic, bizarre, or more often than not silly, the way it is written is stunningly captivating and allows us to forgive a variety of authorial sins. There is some literary magic, for sure, in George’s pen and even though we mock, chide, and underline sections to later read to our partners for a good laugh, it’s impossible to fully discount The Little Paris Bookshop.

In the end, I do something unusual and give a story that I neither identified with nor enjoyed two stars. Two, because the writing itself is a beautiful work of art and the novel, not worth reading for its own entertainment merits, has a certain seductive charm in the lilting style of its structure. Sentences and paragraphs here are the star, for the true bookworm who sometimes puts style ahead of intent and content. In the end, however, it’s not enough to redeem the novel and give it the readability that will keep readers sussing out George’s books. An elegant disappointment crafted from a complicated mess, The Little Paris Bookshop is more semi-satirical than serious and the biggest flaw here is that it never intended to be. Shooting for greatness and seeing itself as great, the bragging awareness of a ho-hum, seen it all before, B-movie plotline is spiffed up only somewhat by the beauty of the words in which it is entwined.