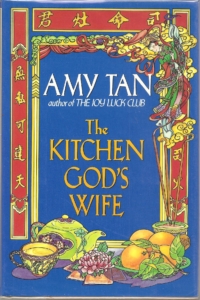 A Story of Beautiful, Scarred Survivors

Zao Jun was once a dedicated farmer who, upon marrying, turns into a tyrant. Whiling away the family’s earnings and abusing his long suffering, kind-hearted wife, Zao dies, regretful. His regret and his honesty concerning his misdeeds toward his wife earn him an ironic eternal reward. He is now the Kitchen God, a rural deity who watches over the mistakes of others and pronounces judgment. Capricious, vindictive, and generally disliked, the Kitchen God is a household homemaker’s religious nightmare, his shrine guarding over the domestic woman’s realm and, like his forgotten wife, suffering them to live in the shadow of a patriarchal world. The wife, whom even the selfish god admits was saintly, falls into obscurity and so it is in this dusty idol that the family story between mother and daughter coalesces.

Pearl, the daughter of a Chinese immigrant, now married to a non-Chinese man, is tired of the perceived silliness of her mother’s culture and strong beliefs. Encompassed by her deep Americanization, Pearl perceives her mother as the traditional ignorant immigrant and is continually disappointed in the sheer old school Chinese-ness of her family. And so, fighting with a diagnoses of multiple sclerosis, Pearl hides the truth from her mother and her family – uninterested in their whimsical cures and, even worse, their relentless desire to help a situation that is hopeless. When her secret is outed by her mother’s pseudo-best friend/arch-enemy, Pearl is confronted with the knowledge that she must tell or be told on. Meanwhile, Pearl’s mother, the indomitable Winnie, struggles with her own centuries of dishonesty and the passivity of compiled lies.

Transpiring mostly in the past, Pearl’s story takes a back seat to Winnie’s revelations. Opening up to her daughter with a complete exposé, Winnie brings pre-World War II China alive. Pealing the years back, Pearl realizes that her mother’s seeming passivity is a mask that disguises long withheld rage and sorrow. Following a story of childhood abandonment, arranged marriage, abuse, war, miscarriages, loss, and more, The Kitchen God’s Wife unveils the hopeless, good wife and her ultimate willingness to do anything, regardless of the laws of culture and religion, to escape a devolving thankless life.

Winnie’s prose is heartfelt and her voice, finally revealing all to Pearl, comes at us as though she is sitting across the table, nursing a mug of tea, unfurling the complicated threads of her life. The mother whom Pearl has always seen as being cranky and stereotypically foreign, instead reveals a vast oasis of longing, thwarted wishes, and determination.

In this, Tan’s second novel, the mother-daughter relationship is the bond which holds the revelation together, yet the story itself is one mainly of marriage, cultural oppression, and perception. Never falling prey to heavy-handedness, however, the tale is ultimately one of life – a brutal life, yet still a life. Flowing from a somewhat happy and indulged childhood the story covers the twists and turns of living and the fatal events and decisions, seemingly so small, that mold a person. Along the way the desires and assumptions of youth are shattered by the brutality of Winnie’s circumstances and the worsening world around her.

Winnie’s heartbreaking marriage explores issues such as mentally unstable spouses, selfishness, greed, oppression, and of course, the patriarchal nature of contemporary Chinese culture which turned a blind eye to a disturbed man and allowed him to destroy the women whom his life touched.

Winnie’s daily routine with a treacherous, cheating husband creates a need for hard decisions and depressing situations yet, strangely, there is a resilience that runs throughout this disastrous tale and a certain solidness which prevents the narrative from becoming too overwhelming for readers. In the conclusion, sadness comingled with the indefatigable spirit of a strong woman, haunted by her own decisions, paints a portrait of a life lived that while far from perfect is none-the-less stunning and ultimately, admirable in a bittersweet sort of way. Along for the ride, readers are catapulted into heart-rending situations and desperate circumstances, all the while presented with the ever repeating “what would you do” and “what would you own up to” mantra that haunts the characters of this fractured, realistic world. Sure to haunt and inspire in equal portions, The Kitchen God’s Wife is a complicated story of the ties that bind and a woman who broke them and then hid her own cultural treachery. In equal parts we are disappointed and amazed by Winnie and her struggles which grab hold of readers and demand full attention and a complete surrendering of our hearts and imagination to the beautiful, broken thing that is survival. Highly recommended.

*A Note on Edition* I experienced The Kitchen God’s Wife via the unabridged Audio CD as read by Gwendoline Yeo. Yeo’s reading style captures the emotions and intentions of the characters, helping the vivid text to fully capture this extraordinary, every-day world of hardships, survival, and scars. The audio addition is an excellent way to approach this book and furthers the sense of verbal storytelling which is so strong in Tan’s works.