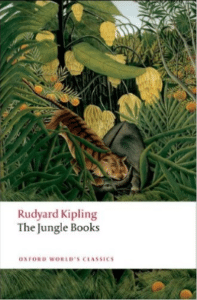 Back on the classics kick, my trusty randomized list selected The Jungle Books for my next endeavor. I happened to have a leather-bound Easton Press edition which combined both The Jungle Book (written in 1894) and The Second Jungle Book (written in 1895). And so, tucked into my DC condo with stacks of undone work towering around me and a steaming cup of coffee tempting me to laziness, I decided to take a break and just sample the first story.  From here on, I was hooked. It wasn’t long before the cityscape around me dimmed, fading into a canopy of velvety jungle leaves and the strange, shrill calls of wild animals truly at home and safe from man.

Most well-known, and loved, within Kipling’s series of anthropomorphic jungle tales, the Jungle Books starts out with Mowgli, an Indian child raised deep in the jungle by wolves. Growing up feral, Mowgli prides himself on being more wolf than man. He is taught by the wolf pack and Mother and Father Wolf, yet his education in the rules of the jungle goes beyond the wolf pack. Bagheera, a wily Black Panther and Baloo, an elderly jungle bear, band together to teach this man cub how to survive in the jungle and gain dominance over Shere Khan, the vicious tiger.

Mowgli’s stories escalate in danger and daring. He is kidnapped by scatterbrained monkeys in “Kaa’s Hunting” and is forced to rely on the terrifying jungle python, Kaa, and his friend the ferocious Black Panther for his redemption. In “Red Dog,” Mowgli once again bands with the striking python to defeat a pack of dholes. Relying on the ancient snake’s wisdom, Mowgli conceives a daring plan using millions of wild bees and the strength of his wolf pack to save the jungle from chaos. Only here, the first hints of Mowgli’s coming discontent are revealed by the pack leader, Akela, who recalls that man ultimately, belongs with man.

In The Second Jungle Book, my personal favorite Mowgli story, “The King’s Ankus” follows Mowgli and Kaa as they discover an ancient white cobra (Thuu) in possession of a vast horde of gold. When a group of wondering men alight on the gold, Kaa and Mowgli follow behind a trail of murder and betrayal, speculating on why men seem so stunned over these shiny rocks. Despite Thuu’s warnings, Mowgli himself becomes tempted.

As the stories continue, Mowgli’s own relationship with his animal family is a thing made of magic and loneliness and intense, respectful love. The fracture between the world Mowgli should live in and the one of the jungle that he prefers becomes a greater challenge as he grows older and longs for human companionship. His interactions with nearby villages however, and their superstitious assumptions of him leave Mowgli haunted by the hatefulness of humans. The theme of belonging is one that can easily become relatable and more than a little heartbreaking, making readers long beside with Mowgli for these secret jungle worlds where we also do not belong and which, ultimately, we could never properly understand.

Other stories presented within this work that you might be familiar with are “Rikki-Tikki-Tavi” in which an enterprising mongoose protects a kind hearted family from the wrath of Nag and Nagina, two murderous cobras. In “Toomai of the Elephants” a young boy is given prowess over a group of older hunters and elephant handlers when he alone discovers the place where the elephants dance on a moon drenched night. “Her Majesty’s Servants” pauses the storytelling to examine the politics of war and what differentiates man’s bravery from the simple following of the beasts.

Despite Kipling’s love of India and concentration on far away villages and stories seeded in steamy jungles, within the two combined Jungle Books he includes stories which take place in arctic climates including one of my personal favorites, “The White Seal” in which a northern fur seal sees the slaughter of his people. Despite the other animals chiding that “this is the way it has always been,” the seal, Kotick, goes in search of a new, safer home. This leads him through a dangerous sea journey, many encounters along the way, and a harrowing final battle to prove his leadership.

All of the stories have a certain lulling effect, much like a snake charmer working on our minds and imaginations. We are effortlessly transported to a world where one lone child can understand the tongue of animals. From the powerful yet protective python to the regal Black Panther, Mowgli’s host of animal companions evince a certain wild wisdom and the lessons are crafted in such a way that readers become introspective. The mere entertainment value of the stories is certainly vivid, portrayed through the folksy rendition of the long ago and far, far away. The jungle hisses and ruffles around us and the magic of the tales, originally intended for Kipling’s daughter who sadly passed on at six, is enough to captivate generations of audiences for obvious reasons. Beyond being creative and simply fun, the stories have deep meaning (such as “The King’s Ankus”) and deal with the larger issues of right and wrong in the context of a natural setting. The sprightly antics of feisty heroes, both human and animal, gives the tales each a sense of verve and adventure that both children and adults will feel drawn to.

The Jungle Books more than earns its status as a classic. It’s easy to see why audiences have expressed so much love for these tales since their initial creation. The talking animals come alive in each. The stories are real and the stakes high. The schemes and plots thicken and the antics are suitably tense and complex, engaging and educating readers with a subtle blend of story, imagination, and moral inspection. This particular foray into a random classic has left me with a new favorite book. I can close my eyes now and retreat to this world of ancient Indian and talking animal companions and it is just as real and relevant as my own daily world. Perhaps more so.