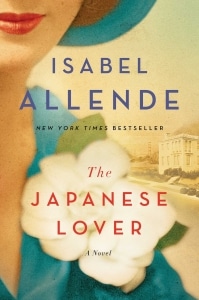 When I learned of the next reading for the book club I have recently joined, The Japanese Lover by Isabel Allende, I was excited to discover this internationally acclaimed novelist and her much anticipated novel. I joined a book club because although I read constantly, I’m not exactly up-to-date or familiar with the current literary realm. My tastes are too esoteric for that and I’m working my way through a long running classics kick. As a bookworm and sometimes writer, I have no excuse not to be engaged in the up-and-coming and the already established world of all those lovely books. That, and got to say, love the cover on this book. To say that I dived into Allende’s narrative enthusiastically would be an understatement and to say that I emerged shivering from the waters of chaotic prose devastated wouldn’t be much of an overstatement.

Ostensibly, the story is one of social issues which revolve around love and relationships. Mainly, this is interracial relationships but Allende also briefly, and a little flippantly, touches on issues of same-sex love. Along for the ride, there are intimacy issues, marriage issues, friendship issues, pornography issues, exploitation issues, child pornography issues, a brief mention of cocaine issues, World War II issues, race relations issues, generational issues, religious issues, and, well you get the picture, right? Everyone in this story has so much baggage that they each need a team of U-hauls to follow along throughout the fragmented mish-mash of years, events, and seemingly never connected flashbacks and flash-forwards.

But I’m getting ahead of myself. You’re probably wondering just what this book is about. I know that I was, right up through our book club discussion where we all looked at each other for lifelines and silently hemmed and hawed around the issue that despite all our excitement, no one just dug the book that much. Of course, we couldn’t say that we didn’t like it either, so we continued with the emperor has no clothes charade.

The story itself, according to back cover blurb and marketing centers around Alma, now an elderly resident at a nursing home. As a young Jewish girl Alma’s parents removed her from Poland before Hitler’s invasion to live with wealthy relatives in England. As the war progresses, her parents become lost to her and she slowly forges two bonds: one with Nathanial, her morose cousin, and one with the Japanese gardener’s son. Unable to trust, not truly belonging, and haunted by the horrors of ongoing war and the loss of her brother, Alma’s  two connections become her world and her love for Ichimei grows into something sexual and ultimately, brittle. Separated by circumstances, the introduction of Japanese internment camps in the US, social pressures, and an unfathomable shallowness, Alma and Ichi let time float between them and then draw them together again in a safely surreptitious manner.

The story is framed multiple times, starting with the inclusion of Irina (Alma’s helper at the retirement home) and Alma’s grandson, both of whom suspect a secret lover and want to ferret out the details of Alma’s hidden, stoic life. Irina has trust issues of her own to resolve and a haunted past, and she comes to the retirement home with a certain degree of brokenness that is simply so much distraction from Alma. Other chapters are first person point of view, supposedly in Alma’s mind (or possibly depictions of something she tells later?) going back in time to non-key childhood moments. The final frame arrives late in the tale as failing health makes Alma decide to tell aspects of her own story. Interspersed are letters from Ichi. It’s a difficult timeline to follow and the breaks are not clear or clean. It’s hard to distinguish just who is telling which part of the story and at what particular point. Even more difficult is the sequencing of events since childhood, teenage years, adulthood, and old age spiral together in a kaleidoscope meant to show time as a boundless prison which instead makes the story glitter with all the dullness of a dusty, shattered mirror. What was the point?

More importantly – the characters are not relatable or likable. For a novel meant to be so passionate and a story peppered with illicit affairs and “shocking” material, Alma and her associated set don’t seem to feel or care for anything. Alma is, essentially, Mr. Spock with some rather lovely lipstick (can’t get over how much I just like the cover). We don’t feel her loss or her desire and this dispassionate telling later leads to our further dislike of Alma who epitomizes selfishness.

Alma denies her love for Ichi, predictably, because she doesn’t want to pay the price in society. We expect this, here comes the rub and thus the moral of the story. Old age will enlighten her we feel, time will show what really matters. Except, it doesn’t. There are no regrets and she even states that she would do the same again. The author tends to exalt this self before morality and before others ideology, although I am not sure that this was intentional. Alma is depicted as strong, especially as she engages in an open marriage and affairs throughout a time period where this would make her a social outcast. It’s ok, however, because Alma is careful and never found out. Her web of lies is just as successful as it is elaborate.

Later, she finds happiness in an affair with Ichi where he, supposedly a very upright, honorable character, remains loyal to his wife and family at the same time as having a passionate affair with the woman who refused to marry him. This all interweaves into a happy, see how much true love succeeds ending, which personally made me want to launch the book across the room. So this is the way to be happy, to get love? Don’t stand against racial prejudice or the stupidity of antiquated society? Just do whatever you want and keep it secret, because outward appearance is all that matters and only self-centered Alma was wise enough and strong enough to see this. Ugh, so let’s just take the world back another fifty years, shall we? What’s the point here?

Ok, ok, I’ve cooled down now. For a book that mostly kept me on the near edge of sleep the conclusion managed to make me feel, but as you can see, that wasn’t a good thing. Beyond the moral obligations of the individual and society, which are violated and then cast aside by the counter-productive concluding message of The Japanese Lover, the story itself wasn’t even engaging or interesting. If it hadn’t made me mad in the conclusion, I doubt I would have recalled it at all. Not recommended.