Imitation of Christ, The 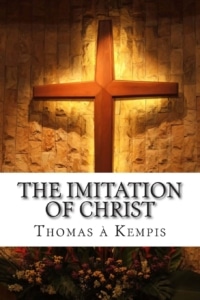 Who would think that a five hundred year old plus book, originally penned anonymously in Latin, could still have such a daily impact? As a child, part of my schooling involved reading a daily chapter from The Imitation of Christ. This was no small task, the devotion and theeing and thouing of a long lost monk in love with self-denial was not only difficult reading in a vocabulary sense but also challenging from an intellectual perspective. Nevertheless, despite my less than charitable thoughts while plowing through Kempis’ erudition, it was a book that combined simple truths and heartfelt love. As a child, I really didn’t grasp much of it, yet somehow, what little I did understand stayed with me to the point that I still remember the shiny old book cover, incongruously depicted some luscious looking grapes alongside a candle.  Now, as an adult, riffling through religious lit trying to do some late night education, I decided that at nearly thirty, Kempis’ words and meanings might make an even bigger impact on me. After all, there is a reason that along with the Bible it is one of the most renowned and often referenced religious texts.

Kempis divides his conversational text into four books: “Helpful Consuls of the Spiritual Life,” “Directives for the Interior Life,” “On Interior Consolation,” and “On the Blessed Sacrament.” Once you divorce yourself from the aura of formality that just comes along with older text, Kempis straightforwardness captures you. He takes on the aura of a narrator, half troubled and half jubilant, sitting across from you at a battered oak table, looking into a forgotten coffee and just talking: pouring everything out from his certainties to his shortcomings and temptations. The sincerity is almost frantic and can, in a way, be distancing in that what Kempis initially says sounds like complete self-denial, bordering on loathing. This isn’t really, however, what he is saying and the repetitive nature of each section which builds further upon the arguments that precede it drives home the common sense practicality of Kempis’ devotion.

What’s not popular yet undeniably relevant is the main point of the discourse: to move closer to God you must move further away from yourself and, thereby, all the trappings of the world (whether this be friends, jobs, fame, glory, or the love of people.) Kempis notes that only in solitude can the spiritual life grow and he doesn’t always mean to the same extreme to which he has taken his life as a monk. The truth is that the world is distracting and to connect with God (and, consequentially, others) you must first take a step back, away from the immediacy of need and desire, into a quiet place where you can concentrate on God. Instead of rubber-necking at life, Kempis advocates deliberate control, allowing us to focus on what matters the most. It’s a bit difficult with the old rhetoric because it always sounds like these borderline saint types are advocating a surcease of the joyful and yes, trivial, aspects of life. But, if you really read and follow the spirit of what Kempis is saying and his own advice built upon the all too human advent of failure, you realize that the methodology isn’t denial but freedom in focus. If we want to be near God, as with any human relationship, we’ve got to make that a priority. And you can only truly come to know another through listening, all that background static muted.

The other three portions of Kempis’ work merely follow in the same vein. Sometimes Kempis wonders in his topic and, like that man we picture over the scarred oaken table, tells us what’s bothering him, what he fails at, what he wants most, and the bliss that surrounds acquiring what he truly wants, if only he can continue to stay focused. Kempis continues to elaborate on the richness of an interior life and how ultimately, that opens one to deeper relationship both with God and self. Needless to say, in this manner true concern and sympathy doubtlessly develop and spread to all those around.

From here, the final portion of the discourse concentrates on the Eucharist and how accepting it and living through it is the key element to a spiritual life. The journey that began with withdrawal, quietness, and contemplation with the intent to destroy selfishness and worthlessness, and temporal distraction concludes with noting that a shift in mind and an introspective eye is the only way to truly approach and appreciate the mystery of salvation as granted through the symbolism of Eucharist.

The bite-sized paragraphs of text suit themselves well as daily reading. Rarely exceeding a page per chapter, each moment is crafted in a way that the reader can pace him or herself, integrating as little as a few paragraphs a day into a regular reading and prayerful meditation. Of course, the swiftness of each section also allows readers with different needs and preferred paces to race through the books, gathering the entire argument into one immediately, perhaps with the intent of a slower reading later. Either way, it works with the reader, unlike most lecture style “change yourself” type of conversations.

As with my initial reading, I didn’t always understand everything (or, ok, want to even hear everything) Kempis had to say. Yet the verve, the zeal, that evident goodwill expressed through kind hearted admonitions stuck fast, giving a tidbit to think about every day and enabling a slow phase from selfishness to hopefully, someday, near-complete selflessness. Sometimes Kempis said the obvious and other times, only once I hear him put it into words did I suddenly realize a self-evident truth or manner in which to live that once encountered couldn’t be denied. It’s not an easy book, yet The Imitation of Christ is a necessary, dare I even say, essential book for Christians everywhere (and those also seeking to understand the tenants of Christian ideology). Merging the straight forward with the deep, speculating while always keeping an eye on the practicalities, Kempis is an everyman type of figure and while we know he’s a devoted and brilliant monk, it’s not too hard to imagine reaching across the pages and stepping into the world of a contemporary and a friend.