Hitchhiker’s Guide to the Galaxy, The 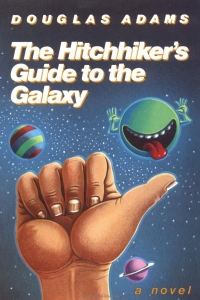 Don’t Panic: We Have the Answer . . .Just Not the Question

It all begins the way most disasters do – with some red tape. Earth man Arthur Dent, unwitting friend to an alien pretending to be a failed actor, is trying to stop some men from knocking down his house for a freeway, when a team of spaceships arrive to destroy earth (ironically, for an interstellar freeway – really, the plans were on Alpha Centauri for fifty years, people.) Hitched off the planet by his alien friend (Ford Prefect) who just so happens to be a journalist for the Hitchhiker’s Guide to the Galaxy, Arthur is introduced to the stellar guide and its soothing cover message – Don’t Panic. Good advice considering that, you know, Arthur’s world really is over. But the adventure has only begun!

Morphing from eccentric to downright bizarre, the tale travels at warp speed across the galaxy as Ford and Arthur try to escape the Vogons (an odious administrative race of aliens with a penchant for bad poetry). Along for the ride is Zaphod Beeblebrox (spaceship thief and president of the galaxy,) his calm girlfriend Trillion, and Marvin the clinically depressed robot.

A cultural icon with references spanning television, video games, novels, and just common-speech, Hitchhiker’s Guide to the Galaxy is one of those marvelous creations which most of us have heard of, many of us can (and do) quote in regards to 42, and few of us have actually read. Back on my kick to read the classics, I decided after a particularly dry war tome, it was time to jump to something a little feistier in nature and frankly, more fun. I was more than rewarded. So, here’s why thirty years later, you should still be reading this quirky, sardonic, wacky novel and if you haven’t already read it, here’s why you need to just stop everything and read it now.

“This planet has — or rather had — a problem, which was this: most of the people living on it were unhappy for pretty much all of the time. Many solutions were suggested for this problem, but most of these were largely concerned with the movement of small green pieces of paper, which was odd because on the whole it wasn’t the small green pieces of paper that were unhappy.”

The daily routine of responsibility, trudging to work, and occasionally falling asleep and rear-ending the barely moving car in front of you doesn’t leave much time for happiness in life, and certainly not much time for exuberance. That’s one of the many reasons this book is still relevant. It’s irreverent and facetious, poking fun at the system and all the administration and boxes we have to check to get from Point A to Point B to appease the authorities that be and our so-called rules of existing in the rat race. As a matter of fact, it pretty much wins the reader over from the first sentence when it starts mocking society and everything we hold sacred. Yes! Yes! Tell it Douglas Adams! Preach to the choir my man!

Need more examples? You people are a hard sell. How about this little tidbit from where Arthur valiantly tries to save his house from destruction (of which he was never notified):

“But the plans were on display . . .”
“On display? I eventually had to go down to the cellar to find them.”
“That’s the display department.”
“With a torch.”
“Ah, well the lights had probably gone.”
“So had the stairs.”
“But look, you found the notice, didn’t you?”
“Yes,” said Arthur, “yes I did. It was on display in the bottom of a locked filing cabinet stuck in a disused lavatory with a sign on the door saying Beware of the Leopard.”

Where else can you get that kind of verve, that plucky humor that is just plain craziness? Didn’t I tell you that the novel was like being in a Monty Python skit? Now do you see the genius! And this is only an excerpt from the beginning before things really get, as they say, cooking.

“The President is always a controversial choice, always an infuriating but fascinating character. His job is not to wield power but to draw attention away from it.”

With a sharp honed wit with like that, what’s not to love about our  characters who unwittingly provide commentary as they dash about the galaxy in search of success, digital watches, a Pan Galatic Gargle Blaster, or, you know, an ancient super-secret legend involving some mice and a really old planet. Personally, the smarmy Zaphod is my favorite. A self-serving politician with an ego-complex and a destiny for disaster – all too true and yet, all too humorously lovable in this oddly happy but very messed-up world. The other characters are, of course, just so intriguing and downright captivating you want to grab your towel and jump on a spaceship with them . . . except, well, Marvin. Who needs an angst-ridden personality prototype robot around?

Wait, why am I still here? Why am I not already reading the next book in the series? Because I’m trying to win you over, you hold-out. You’ve seen some of my favorite quotes from the novel – really, is there anything else I could say? Well . . .actually. . . one really important thing. I find this experience essentially a magnificent product of the audiobook world because guess what, Stephen Fry narrates the short, snappy tale. Fry is brilliant and highlights all the eccentricity of this beloved tale. We’re in it, in the here-and-the-now as everything morphs in the Improbability Drive and we’re just as anxious as that long ago race of curious aliens to understand the true epiphany of 42. The audiobook is a complete experience and as you know, entertainment is essential for the um, ultimate project (as it were.)

Happy reading friends (or re-reading, because I really probably am the only person out there who is just now reading this.)

“One of the things Ford Prefect had always found hardest to understand about humans was their habit of continually stating and repeating the very very obvious, as in It’s a nice day, or You’re very tall, or Oh dear you seem to have fallen down a thirty-foot well, are you alright? At first Ford had formed a theory to account for this strange behaviour. If human beings don’t keep exercising their lips, he thought, their mouths probably seize up. After a few months’ consideration and observation he abandoned this theory in favour of a new one. If they don’t keep on exercising their lips, he thought, their brains start working. After a while he abandoned this one as well as being obstructively cynical.”