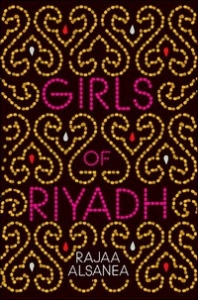 A Personal Culture Clash: An Internet E-Mail Scandal Bears All

Love and sex have long been subjects of interest, but perhaps not more so than in places where both are considered forbidden. The daring of anonymous technology and the Internet is slowly opening oppressive cultures and leading individuals to question not only their heritage, but their religion and place in the world. Taking the Islamic world by storm, and getting itself immediately banned in the process, Rajaa Alsanea’s Girls of Riyadh ‎ is a strange mélange of epistle and narration following the lives of four high class Saudi women, searching for love and meaning, while dealing with a transitioning world and new ideals. The temptations and tensions of Western culture are seeping into the mind of these four young college girls, and they seek to balance possibility with the beauty of tradition and the strength of their own individual faiths. Told by an unnamed narrator, their stories are seeped to the world through a collection of emails, sent to randomly discovered Saudi addresses, where the anonymity of the Internet acts as a cloak and allows both the writer and the audience to juggle all the hard questions and talk about all the forbidden desires.

In the beginning, we meet Gamrah, a conservative girl participating in an arranged marriage, the envy of all her single friends. Life looks good for Gamrah, her friends concede, because she now has a man and isn’t so alone. However, Gamrah’s new life partner has secrets to hide. Neither chose the other and the struggle of following duty over desire and love soon fractures a tenuous relationship with embittering effects on Gamrah. Labeled with the black mark of a divorced woman, shackled with an unwanted child, Gamrah is shunned by society and her rights, what few there were, are further eroded until she discovers the beauty of chat rooms and pretend romances. Still, Gamrah’s world is one of fantasy and loneliness, painting a vivid picture of a double betrayal – that of her husband and even larger, and more pertinent, that of her culture.

Sadeem is little better off than Gamrah. In the process of being wed to her true love, Walid, she agrees to buck the system and spend a night of pleasure with her husband-to-be. After the consummation, Walid suddenly abandons the contract and ends the possibility of a union. A girl who has not protected her virginity, who has given into a man (whatever the circumstance) is shunned and also unmarriagable. Lonely and  hopeless, Sadeem wonders if all men are indeed this way or if perhaps her treatment is a symptom of strict and outdated cultural prerogatives and a certain element of double hypocrisy inherent in her restrictive society. When she is met with a second chance, she must decide between love and self-respect.

Michelle (Mashael) is half American and half-Saudi. The liberal, outspoken thinker of the group, Michelle’s hopes are soon dashed when her mixed heritage convinces her thwarted lover, Faisal, that despite his love, he should heed his mother’s warning. Choosing the safety of family and tradition over feeling, Faisal’s heartbroken rejection leaves Michelle distrustful of men. When she becomes more heavily involved in her career, trying to forget her loneliness, she is once again thwarted by the expectations of culture and her father’s sudden move to “save the family name.”

Only Lamees achieves a happily-ever-after blend between love and a successful job. Taking the middle road, Lamees combines a devotion to religion with a modern outlook, choosing her own man and her own life without throwing aside all vestiges of her heritage. Ever open to the needs of her friends, Lamees’ advice bonds the disparate group of seeking women together into a cohesive unit. The friends look out for one another and question their tragedies and disillusionment with men together, growing as individuals while still bearing the emotional (and sometimes physical) scars of their experience.

As the narrative progresses the anonymous narrator answers both hate mail and fan mail, delivering in her gossipy style more details regarding each girl while refusing to identify herself (or possibly himself) within the story. Together, the strong group of friends delve into the burning questions they are not supposed to ask. Some rise from the ashes (Lamees) and find balance and answers whereas others (Gamrah) devolve into unresolved rage. It’s a startlingly vivid portrait, impacting because of the reality of each person. The perceptions of love and the etiquette of relationships, however distanced by culture, still remain achingly familiar to the audience as do the pressing questions of an evolving world. Are religion and society all built upon hypocrisy? Is tradition an unbreakable chain that severs and destroys? Are some elements of a heritage good and others bad and if so, how do you identify them and select what stays and what goes? How has the advent of technology and the cloaking presence of the Internet impacted areas of the world where former strictness can now be disregarded using a device – and ultimately – should it?

Alsanea’s bestselling book was promptly banned in Saudi Arabia after its release (and then swept like wildfire throughout the Middle East as cloistered groups smuggled it in and read it.) The significance of the book’s own history, combined with the questions it asks, are evidently relative to a specific region, culture, and religion (i.e. Islam). Nevertheless, there’s a strange universality to the girls’ experiences as well as the defiant tone of our “shameless” narrator. History loves a rebel and audiences adore a bit of shamelessness now and again, especially when the topics broached are such large ones that face so many people, in so many places, across so many different traditions and backgrounds.

Ultimately, Alsanea’s answer, presented through Lamees, is a moderate road that is unrealistically effective. Combining the old and the new, Lamees seems to know what to keep and what to throw away while evolving with the times and not sacrificing principles. It’s because of this that she is the least relatable. The broken spirits of Gamrah, Sadeem, and Michelle, however, cry out for attention and it is in their experience and heart-rending mistakes that audiences find the true hook of the narrative and the meaningful cultural commentary. Focused on what people do to one another, the fracture of socially unacceptable relationships, dashed hopes, and strong longings bring readers into the world of the stories’ “losers” who by the end are starting to figure it out and making the best of bad circumstances. It is these girls with their vivid desires and their inherent questioning and confusion that draw readers to the tale and involve us deeply and emotionally.

The only quirk, sadly, is that the promised mystery narrator’s reveal all is ostensibly forgotten, and in the conclusion this voice which has coaxed us through the personal growing pains of both a region and a set of individuals remains unknown. This leaves readers feeling a little as though that voice was a device to highlight the extreme reactions the story would engender whereas, on a deeper level, we suspect that the identity of the narrator was somehow paramount to the reasoning behind the reveal-all Internet chatter.

*A Note on Edition: The fiancé and I listed to an unabridged recording of The Girls of Riyadh as read by Kate Reading. Reading does an exquisite job evoking the emotions and narrative conspiracies within the story and, for those of us who are not Saudi, mercifully pronounces all the names and places with the authentic tinge that gives true storytelling its shine.