Girl on the Train (Frances) 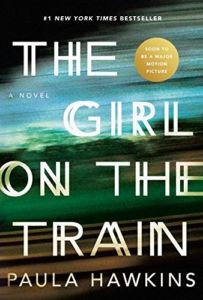 Prowling through Kramer books in downtown DC with the fiancé in the pre-Christmas cold of last year, the stylized rush of The Girl on the Train caught my attention. Acclaimed as Gone Girl meets Gaslight in the New York Times review the then fairly new book had grabbed my attention and elevated my hopes. A few weeks after having bought it, I joined a book club and, with exceptionally little politeness (I do not suffer from shrinking violet syndrome), I strong armed my selection into our rotating list as the June read. That gave me several months to worry that what I had recommended based on some reviews and positive feedback might not actually be good. After having breathlessly finished the last page, curled up on the sofa (adamantly ignoring my late working, over tired man and the outside whirr of late night traffic) I knew that not only was my first book club selection passable – it was inspired.

Segmented between three narrators, one of whom is a decided villain early in the piece, the story heightens the dissonance between three unreliable and unstable female protagonists. It all begins with Rachel, grieving divorcee and non-functional alcoholic who goes through the motions, riding the commuter train in everyday, staring at her old house where her ex-husband lives with his new wife and their bouncing baby. Further down the block a young couple, whom she secretly names Jess and Jason, live out a happily idyllic life. As Rachel sees them every day, her loneliness causes her to fantasize about them, elevating them to the status of the perfect couple. One day, however, something she sees changes everything and that’s when the danger, the fragmented memories, the inexplicable blood comes into play.

Jess, actually named Megan, is the second narrator and, predictably, is far from Rachel’s ideal vision. A liar, a cheat, a drifter, and a psychologically selfish individual, Megan is running from secrets in her past. Meanwhile Jason (aka Scott) suspects that his wife is once again having an affair. When Megan suddenly disappears, and stays gone, suspicion turns to the large, overbearing husband and his insane jealousy. But is the obvious choice the right one? Rachel thinks she knows – but what use is a jobless drunk who compulsively rides trains to the police and how can her sparse testimony prove what she knows?

Meanwhile, Rachel continues to drunkenly dial and hang around her ex-husband, often not remembering her abuses and her threats – including the time she tried to steal their daughter. When the new wife, Anna, decides to take matters into her own hands, our third narrator comes into play. Anna was a woman who loved being a mistress and enjoys the thrill of competition and defeat, but with the new baby’s safety at stake, she is troubled by Rachel’s antics and her husband’s permissiveness toward his haunted ex-wife. Determined to sort out Rachel for once and all, Anna stumbles into something that is bigger than herself.

Although Girl on the Train doesn’t have the fast paced, psychological double-dealing and complexity of Gone Girl, Paula Hawkins is no stranger to creating a creeping atmosphere and Hitchcock like tension. Rachel is an alcoholic amnesiac with a dependency problem on her former true love. Guttural in the rawness of her anger and the chaos of a disassembling life, Rachel is the only protagonist in the book readers can actually like – yet she is too far gone to trust. Rachel holds the desire to find a solution, but does she really have the key to the mystery? How many events are in her own mind or products of disturbed, hungover dreams? With the sketchy shift in time and place, the maintained fragmentation of the narrative both in telling and unraveling, our emotions and minds are equally involved and equally skeptical of the down-and-out woman we want to like but are afraid to ultimately get very close too.

Megan and Anna, the bad girls of the narrative, are intriguing for their very selfishness. Specifically, Megan’s quagmire of love interests and mishandled life are presented real time, long after readers know about her disappearance and probable murder. And so the timeline shifts and intersperses and we feel that there is a clue to the sullied past of Megan, perhaps even one in the winner-take-it-all rantings of Anna. This escalates the tension and complicates the narratives, sections interfering and even seeming to contradict one another. Events told between separate narrators connect and then shatter one another. A seeping form of forgotten violence stirs at the surface, and a long alley by the train station on a black night beckons Rachel in her uneasy slumber.

Hawkins creates atmosphere, slowly introducing Rachel and making readers care about the circumstance and seeming betrayal before we fully know – before even the main pieces are revealed. Readers oscillate back and forth, attempting to solve the mystery of Megan and also trying to understand: what really happened to Rachel’s marriage and can we sympathize with this broken girl on the train after all?

The ending has a twist and if you want to compare it to Gone Girl, yes, it certainly isn’t as clever or even as unforeseen. How can you emulate the epic reality destabilization and deliberate mental screwiness of Gone Girl? You can’t, and audiences need to stop comparing every mystery/thriller with female narrators to Flynn’s blockbuster hit. The Girl on the Train presents a simpler, straight forward plot twist which, in a stroke of random genius, I was able to actually, finally guess before the conclusion. Either my prowess as a mystery reader is growing or Hawkins seeded her bread crumbs well enough for readers to find the treasure early. It hardly matters because the narrative is captivating and guaranteed to make you ignore family and friends until the last page is turned. It’s a fun combination between mystery and thriller with a modern, multi-narrator voice and the ability to paint common pictures in dark ways: discarded clothes by a rail-way, the ringing of a cell-phone, a standard neighborhood block of happily-ever-after cookie cutter houses. There’s aura and tension and enough suspects to kill the hapless Megan many times over, and most importantly, it’s a dangerous journey to the true heart of evil that keeps readers turning those pages, ready to go to the depths of a broken mind and remember something horrible.