Put This Fire Out 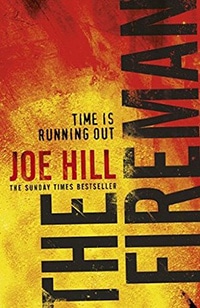 We’re big fans of plagues and dystopians around here, so imagine our excitement when we heard about The Fireman, which combines elements of both and adds a splash of spontaneous human combustion! (This book also appeared in our Winter/Spring 2016 fiction preview, if you’re looking for more new books to add to your list.)

A horrifying plague known as “Dragonscale” is spreading across the United States like, er, wildfire. First, the highly contagious disease marks its victims with striking black-and-gold patterns — and then they BURST INTO FLAMES. Harper Grayson, a tough but dedicated nurse, cared for hundreds of plague victims until her hospital burned down. Now she has Dragonscale herself. She and her husband Jakob swore a suicide pact in case they ever caught the disease, but suddenly Harper realizes that she wants to live — if only long enough to give birth to the baby she’s carrying. Jakob blames Harper for bringing Dragonscale into their home and has a mental breakdown, turning into a cartoon villain with swirling crazy eyes.

As the disease worsens, society starts to break down, and vigilantes attack the sick. But Harper hears about a mysterious man, the Fireman, who has supposedly conquered Dragonscale and uses its pyrotechnic force as a supernatural weapon. Can the Fireman protect Harper long enough to give her baby a chance? And even if he can, what kind of world will the baby be born into?

So, OK. Obviously, from the plot summary, realism isn’t a big part of this story. I’m not one to quibble over a little suspension of disbelief when it comes to global pandemics. But we do need to have some emotional investment, which usually means believable characters whose problems we care about. Unfortunately, the main characters are pretty dull stereotypes. Harper spends most of the book as an oddly passive Fretful Pregnant Lady. Jakob goes off the rails so completely that we never see any redeeming feature that might have made us care about him or their marriage. The Fireman is the stereotypical Cryptic Damaged Tough Guy, but his refusal to share anything about himself prevents the reader from ever getting to know him. And — cringe — there’s even a Magical Black Person, who talks to her pet houseplant and dispenses sassy wisdom and knowing head-shakes.

The Fireman is all over the place — part apocalypse thriller, part sci-fi, part horror. But it doesn’t really commit to any of the genres, and the result is a rambling mess packed with warmed-over tropes and weird digressions (like a bizarre tangent involving long-ago MTV VJ Martha Quinn). It’s too bad, because the plague premise is intriguing, but the story quickly devolves into tedious back-and-forth bickering between annoying, whiny characters.

If you’re curious, you can read an excerpt here. But maybe you should just read these other apocalypse-themed novels instead.