Fellowship of the Ring, The 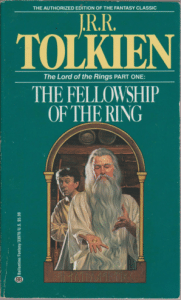 One Ring to Rule Them All: One First Encounter With Middle-Earth

I’ve been known to concentrate on the esoteric and completely miss certain “staples” of the fiction and novel reading universe. As a teenager and later into college, I discovered fantasy through Dragonlance and fell in love with the heavy tomes detailing the Chronicles of the Heroes. I’d heard that Weis and Hickman were stealing the idea from Tolkien, a much older, far more well-known fantasy epic that for whatever reason – maybe the exceptionally old school drawings on the cover or maybe the too-much-action and over-the-top fantasy elements of the rare movie preview – I just wasn’t interested in reading. Of course, despite my hermit-like existence, I did eventually end up seeing the movies in my 20s, when my horrified friends drug me, screaming, into the modern world. They were just – ok, yet by this point I had discovered that many of the books I avoided as either being too classic or too popular were actually exceptionally thought-provoking. Back to my “classics kick,” a one woman journey to read all of the books I should have read but somehow didn’t, I snatched my boyfriend’s childhood paperback copy of the book and delved into the yellowed pages.

What is there to say about such a well-known and well-loved story, one that is ultimately a cultural icon for both young and old, transcending generations, sparking the imagination of future writers and movie producers? What if, against all predictions and expectations – I didn’t actually “get” what was so popular about The Fellowship of the Ring? What is so great about Tolkien? To my undying shame, I just thought that The Lord of the Rings was ok, just an eh response when I had expected something so epic.

In The Fellowship of the Ring the story gets its beginning: It is discovered that Bilbo Baggins, the adventurer from The Hobbit has a magical ring which he passed onto his nephew, Frodo. With the assistance of a longtime friend of the family Gandalf, the famously powerful wizard, Frodo discovers the true, insidious nature of the ring. Sauron the realm’s ultimate, undying enemy (a sort of Satan in this tale) created the ring to bind and rule all and Frodo must resist its powerful temptations and return it to Mt. Doom in Mordor – the only location where it can be destroyed. Naturally, this location is in the very heart of the enemy’s land.

The first book in this series concentrates on the discovery of the ring, the decision to make the journey, the choice of the fellowship, and the first leg of the trip itself. All of this in over four hundred pages leads toward an exceptionally slow pace with the adventure itself being present only in the journey, which is mostly through interminable lands. The enemy and his ghostly minions are all around, yet their attacks are seldom, Tolkien going more for an atmosphere of paranoia to show the changing nature of the world around the companions. Summarized in a review, the events of the book sound like they have potential, and perhaps I would have felt that they did if they had happened quicker and there was less hemming and hawing around decisions and who goes with whom and who remains in the group and what path they take …. Ugh, etc. Just rethinking it all makes me tired.

As the first fantasy epic of its nature, The Lord of the Rings opened the door for future fantasy series, including my beloved Dragonlance which had the same heroes-go-on-adventure and dreadful-enemies-arise motif, but with a more exciting pace and atmosphere. And far, far less history of the native creatures, lands, interactions, and political circumstances. And, need I say, less singing and lyrical moments in verse. Are you cluing into the aspects which I found displeasing, which just dispelled my desire to be on this journey with these brave hobbits? Was I too subtle there?

Not to say that the novel had no charm – it did. Some of the circumstances were titillating although for readers like myself, jumping in without having first read The Hobbit it feels like a story which is breathless trying to get past its origins while also still trying to provide enough information for new readers. It doesn’t work, at least not for me.

The rest of the novel drags and feels indecisive. The adventure has trouble starting and then it has trouble continuing. The character list is huge and the personalities merge to the degree that by the time we meet the elves in their homeland, we’ve lost track of all the tag-alongs on this journey. While there are some big moments of tension and risk, all the slow spots ruin the overall feel and while I plan on continuing the series, it’s more out of a stubborn need to say “there, I’ve done that” than any form of actual enjoyment in the tale.