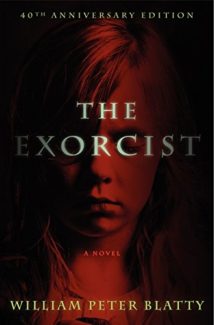 An Ageless Story of Faith and Doubt

Driving by the Exorcist stairs always chills me – the fancy yet eerily run-down M-street corridor –  unnatural steepness of the dark, misshaped stairs. This location with its moody lighting and H.P. Lovecraft-esque architectural dereliction would haunt me even if I hadn’t witnessed the famous stair scene in The Exorcist of the priest plunging into a brutally sprawled death. The iconic movie with its no-holds bared research into the profanely occult only exacerbates the sense that there is something else lurking around this glass strewn parking lot. When a tattered copy of The Exorcist appeared within one of my mystery boxes, I decided that any novel based on such a compelling location must be beautifully sinister.

The story is one we’ve all known since the 70’s when Blatty’s fictionalization based on actual events in a 1940s demon possession case was explored through fiction. The story’s success (i.e. hitting [and remaining] on the bestsellers list and spawning legions of movies) underscores our continuing fascination with the inexplicable. What’s the truth – science or supernatural? Should faith be replaced by fact and if so, what exactly do facts reveal in cases where there simply is no explanation? Taking the entire gross-out horror to another level, Blatty gives readers the chills and thrills they want while mixing in something far more somber and disquieting. Simply put, The Exorcist is a book with teeth.

Converse to what you might think, The Exorcist is essentially a story about doubt, told mostly from the prospective of a faulted priest who has embraced psychology and science over the rigid fantasy play of religion. Father Damien, sometimes likeable and sometimes annoying for his own inability to decide and his self-destructive logicality, is torn between hope and a certain nihilism. The things he’s seen (not to mention done) haunt him. If God is real and who He says He is – then why all the suffering and horror? Is religion just mysticism – the occult inverted? 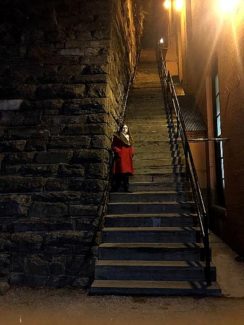 Yours truly on location at the Exorcist Stairs.

doctors and psychiatrists have failed. Famed movie actress and devout atheist Chris MacNeil is at a loss since her eleven-year-old daughter (Regan) has begun acting strangely . . . sometimes doing the physically impossible. It’s finally come to the point where the only remaining hope is that Regan’s un-diagnosable illness is psychosomatic, the results of feeling guilt for her parents’ divorce and reading a borrowed book on witchcraft (as theorized by doctors). If Regan thinks she is possessed then the ritual could make her likewise think she is cured, or so the theory goes. Of course, there’s far more to it than that as a group of characters struggling for facts and answers are given the unanswerable, the inexplicable, and towards the end, the diabolically tragic.

Together it’s a journey through doubt and faith, across chasms of regret, against the bestial nature of evil and its debasing qualities, and through the other side where those black and white yes/and/no questions remain just as mystifying. Either way, choose what you may, answers never present themselves in the way we think we want them to – and that’s where the visceral, bleeding beauty of this bare-all book lies.

Meanwhile, as The Exorcist breaks down what it means to be human and what faith truly is (faith in science/self or even doubt as averse to faith in religion), Blatty never lets up on the pure spine-chilling horror of the narrative. Regan’s transformation is unforgettable – her ancient knowledge mixed with the pathos of a wasting child and the profanity of a dark, ageless force is uncannily evoked and hits discomfortingly close to home. The sequences are painful as Damien is taunted by the very creature which spells his doom as it plays on his own internal weaknesses and fear. The horror is less in what you see (although there is certainly plenty of that) and more in what is said, what is evoked, and how we are all so countlessly broken and vulnerable. On another level, however, as the unthinkable unfolds readers nod – we see now how it happens to us, how we are pulled in, how we let our own weaknesses and doubts make us trickable – how sometimes, we want that trick even though we say we want truth.

The conclusion isn’t the satisfying here’s-your-answer resolution that you want. If you look for it, there is hope but also a certain sadness. The one character whom we suspect finally “gets it” is now dead and the others left behind begin to repeat the process. Perhaps they’re a little more open now, but the gnawing jaws of doubt and the laugh of an ancient demon echo somewhere off in the distance. Our greatest enemy is our love of uncertainty and the way in which we embrace confusion.