Couple Next Door, The 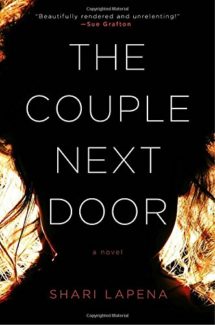 A Darker Gone-Girl Wannabe: Captivating and Yet Imperfect

Always in search of another Gone Girl or The Girl in Cabin 10 mystery/twisty thriller read, I selected The Couple Next Door, acquired through my trusty addiction fix, Book of the Month, and settled in for another promisingly tense story of deception and the truth behind seeming suburban banality. It all starts with a dinner party between two apparently content and normal neighbor couples. Marco and Anne leave their new baby next door, with the understanding that a babysitter will be watching their child while they toast the night away. A last minute cancelation leaves them in a sticky situation however, especially because the sexy woman next door (and consequentially, Anne’s friend) doesn’t allow babies in her pristine house. Determined that checking in occasionally on their sleeping infant is sufficient, the stage for betrayal and disaster is set. Returning home, a gaping front door and an empty crib tell a story of kidnapping and begin a hectic negotiation process riddled with pitfalls and suspicious police intervention. By the end, Anne and Marco’s darkest secrets and long hidden pasts will emerge. Along the way, the next-door couple will be revealed in all of their true, blackmailing glory as scarred police detective Rasbach follows a convoluted history scattered with lies, misnomers, and shrouded motives. It’s the darker side of family, the greedy side of relationships, and the unstable introspection of flawed characters caught out in selfish acts and violent reprisals, promoting page turning absorption.

Despite the current bevy of Gone Girl wannabe novels, nothing really compares with Flynn’s initial shocker (except perhaps What She Knew) and even devoted fans of this sudden thriller/mystery/bad couple fiction aren’t truly impressed by the mimicry. Yet, of course, we keep seeking it out because it’s fun and intellectually appealing to solve this puzzle riddled with sets of disgusting characters mired in a world where their own greed and bad planning/strategic betrayal leads to startling revelations and consequences. The Couple Next Door is no different. It’s fun and involved, page turning and entertaining. We never really forget what it’s spoofing though, and the general heinousness of both Marc and Anne leaves readers enamored by the plot yet completely uninvolved emotionally. This is where the novel suffers the most in that there really isn’t anyone to like or root for and that sometimes the grand effort to hoist big plot twists, such as the rapid conclusion, is obviously just trying too hard to fit into this emerging genre mold. Regardless, it’s a fun read. Not memorable per say, but certainly gripping at the time.

As the story evolves, chapters alternate between three main viewpoints: Marco’s, Anne’s, and Detective Rasbach, the only likable character within the narrative. Marco suffers from the continual slights of his wife’s wealthy relatives who, although they support his failing business, are never far behind to reminder Marco of his inability and unacceptability. Struggling to find his daughter again, he also languishes when he has to request help from his wife’s family: an ungodly amount of money to tempt the kidnappers into returning the baby – if she’s still alive.

Anne’s own chapters alternate between her own hidden mental instability and a growing pile of evidence against Marco – Rasbach’s prime suspect. Anne questions both herself and Marco, wondering if perhaps she did something to their child while also dealing with rumors of Marco’s infidelity with her bewitching next-door neighbor and former friend. Is she a bad mother for leaving her child for a dinner party? Is Marco a bad influence for suggesting that she do so? Is she weak in following his lead, afraid of losing her party-loving husband? As the postpartum depression culminates, Anne hopes the detectives will not dig too deeply into episodes from her past while at the same time wanting her baby back at almost all costs.

Meanwhile, Detective Rasbach, anticipating a bad ending to the case, gives readers an objective outside look at the flawed parents and the brutal statistics. Rasbach is the voice of our skepticism and suspicions, although as the narrative progresses his steadying influence sadly falls aside in the drowning vortex of Anne’s and Marco’s heightened narration. Front heavy with Rasbach’s narration, the later portion of the novel catches readers in a wave of insanity, drowning possibilities with twists, turns, and unexpected schemes within schemes. It’s catchy, if glitchy, and readers soon leave behind the bolstering sanity of Rasbach for the whirlwind of exceptionally flawed characters making self-centered decisions leading to murder and spoiled plans, among other, far worse things.

The conclusion wraps up all of the established loose ends and answers all of our questions – yet the very suddenness of the last turn smacks of sensationalism. The Couple Next Door was winding down nicely enough and readers were satisfied, but author Shari Lapena’s last ditch echoing of Gone Girl’s in-your-face ending just leaves readers feeling the fakeness of the narrative instead of the expected high. Overall, however, the novel succeeds as an immersing mystery – fast paced, gripping, and suitably complex with plenty of dark danger and unstable characters for readers to savor. Not the best Gone Girl imitation, but certainly a successfully intriguing attempt. Recommended, albeit not forever memorable. Ultimately, The Couple Next Door is a fun beach-read that you can get your teeth into.