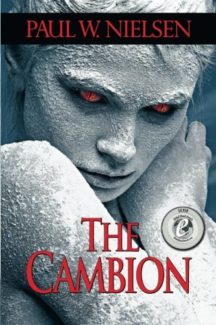 When The Cambion with its subtly creepy cover which reminded me of Gary Oldman in Bram Stoker’s Dracula with its ancient and sophisticated evil came winging my way as a review request from the publisher, I was thrilled. I already had 10+ books in the “currently reading” pile but couldn’t resist a request coupled with a free book and the chance to discover another imaginative and dark journey into the human soul. Integrating everything from haunted orphanages to succubi and the generations of twisted viciousness in-between, Nielsen’s book promises an advanced ingenuity in the form of overlapping ideas and legends brought home to the current day America. Everything from reincarnation to modern ER practices and police investigations is combined with hints at a triple shock ending and a sequel. Sounds good, right?

The problem is – it only sounds good in dust jacket summary form. The ideas are certainly ambitious and the intention creative. The delivery, however, lacks the imagination of the outline and readers fall away from the tale thinking all that complexity, all those ghosts and sex starved demons, are pretty . . . well . . . lame.

The novel opens with Beth and her pushy, country loving husband, Casey. Beth is an experienced ER doctor from the city and is hardly enjoying her stint with the prejudicial yokels in the country ER. The entire mountain/Appalachian legendary ignorance and superstition are more than annoying, and she doesn’t appreciate the conjecture that as a woman she can’t hack this man’s world. Being an outsider also doesn’t help.

So, in an attempt to get away, Beth and her husband partake of the true reason for their new move: some Civil War history. Along the way, they trudge through peaceful battlefields and dingy orphanages, sussing out history.  It’s during these seemingly innocuous outings that Beth begins to see time overlapping, the war intermittently becoming real-time for her in a ghostly, history is replaying on some other plane manner. When she visits the kitschy, haunted orphanage, it becomes clear that she’s not just seeing any history, but her previous life where she had a child, Israel, who was eventually abandoned and killed by the cruel yet seductive mistress of the orphanage (Rosa Stanton). Attempting to deal with what she suddenly knows to be true, Beth returns home. Only, some other things return with her… her previous life ghost-child and an ancient demonic spirit intent on seducing her husband and taking his soul. As Beth tries to ponder both who she really is and who she was, the gore begins to crank. Succubi aren’t good at being subtle. Soon, the police along with a paranormal researcher are looking into the gruesome murders which all have one common thread: they seem to circulate around Beth. With time running out and more people dying, Beth must confront Rosa (the succubus) to release her ghost children and her enthralled husband.

So, stepping out of summary mode, it was hard to write the above and try to shove all of the disparate threads into a cohesive whole. Even still, I didn’t really do it, but you got a taste of the general strange silliness that pervades and the very looseness of the plot. Conceptually, it’s simply half-baked. Ghosts appear and disappear out of nowhere and before we have fallen into either the setting or the characters, we’re skeptical at this sudden, nonplussed jump into the bizarre. Some authors could doubtless make it work (for instance, Stephen King can and has made me believe anything) but the transitions and the intense character connection necessary for such wild ideas isn’t inherent in The Cambion. And believe me, I looked. As a reviewer, I hate getting a free book from a trusting author only to give them a bad review. As a small time author myself (no, I’m not published in anything you’ve ever heard of) I feel even worse. Who am I to judge? I obviously haven’t figured out that whole writing thing either. So, with all of this guilt, I tried very hard to find something I liked, something in the book that spoke to me or worked for me or was just plane unique. I couldn’t.

The biggest issue for me was the fact that The Cambion had no clear direction. At first, it’s about Beth figuring out why she has been allowed to connect with her former life: what does this mean that her other self is calling out for her? Then, it’s about finding out what happened to all of the children in the orphanage, one of whom was Beth’s child. But, the hell with that because we never actually get back there or find out. Then, it’s about finding out about Beth’s previous life child haunting her and how she can help or nurture him.

Then, bam, forget all that too because it’s about a Succubus. Then its about killing the succubus to save Beth’s ghost kid.  Then, it’s really not because the ghost kid is just there and not connected to the Succubus that killed him in life at all (WTF – why is he just conveniently there!?)Then, its hinted that Beth is an old soul so the previous life does tie into it all intricately . . . maybe. Or, you know, perhaps that’s just some deus ex machina involving a ribbon and killing a demon.

Incidentally, the eye fluid from one of the demon’s murder victims was sort of accidentally injected into Beth . . . but that’s worth about two sentences and leads us to think that maybe none of this is about any of the stuff before but all about the child in the end… and … ok, out of breath. And I didn’t even get to the police investigation or the random paranormal researcher or the ouija board that is sometimes helpful and sometimes a real bitch.

In other words, it all feels very amateurish with a “oh, and then this happened,” and “no, no, no, I have a much better idea . .  .what if there was a succubus and sometimes she’s super powerful and can kill people by thinking and other times she is conveniently weak and easily escapable…” and “Police! Hardened cop who’s seen everything.  . . plus, existential planes of time and reincarnation that’s not but sort of is…” and of course “help, help, everyone falls over so damn easily when the monster is chasing them or they are trying to do different tasks because it’s original.” You get my point. It’s chaos, the author’s changing motivations and ideas for align the story more with a rough draft was never cleaned up. We’re seeing ideas, loosely penned, but the connection is vague and the entire story feels as though nothing was deliberate or planned.

In the end, despite trying so hard, the silliness coupled with the stunted writing, shallow caricature protagonists, and the reliance on every horror stereotype out there, left The Cambion feeling way more confusing than it needed to be while at the same time having no real substance or direction. Not recommended.