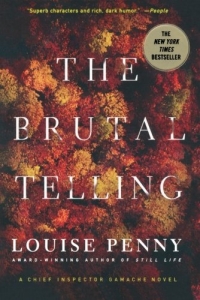 In the depths of the Canadian woods, near the quaint and quirky town of Three Pines, an old secret lies scuttling, weaving stories, and fearing the return of chaos. The Hermit, known only to the town’s BB and bistro proprietor, Olivier, is an isolated man, surrounded by priceless wealth, antiques missing for generations, first edition novels, and an outhouse ironically stashed with money, used as toilet paper. In this glade of seeming serenity, a dark secret is fostered, a fear kindled is enlivened, and greed takes over. When the Hermit’s body is found lying dead in Olivier and Gabri’s bistro, the sinister secrets begin to unravel. Chief Inspector Gamache and his partner Jean Guy Beauvoir soon realize that there is more to this random murder than meets the eye. The discovery of the isolated cabin in the woods, smeared with the dead man’s blood, and a local house with further evidence, leads the inspector and crew on a wild chase that ranges back into folklore, across to the Charlotte Islands, and to the black beating heart of the deceptive human soul.

Oscillating between cozy and macabre, The Brutal Telling is a unique mystery representative of both the cozy genre and literary fiction. The sentences are charismatic, varying, but all with a mood, a sharp honed point, and an introspection that is almost eerie in its uncanny ability to foster paranoia and worry.  Amidst the crunchy fall leaves there is a cabin – both a horrifying and yet an oddly beautiful place – that life of isolation something longed for and feared by the investigating characters, the three chairs evocative of Walden: “one for solitude, two for friendship, three for society.” What’s amazing here is the vividness of both the location and the characters. The first nip of winter chasing fall is detectable in the air, the sun dappled path through the woods inviting yet far from innocent, the carvings left behind by the Hermit, all of which tell a story of woe, provide clues to the man’s past and his eventual murder.

This was my first journey into Louise Penny’s Inspector Gamache novels, although The Brutal Telling is the fifth novel in the series. I managed to win this book at the church basket raffle, along with several others from the series and an adorable knitted hat plus wine – everything needed for a perfect night of reading. Curious about my winnings, and determined not to let them languish in what I lovingly call the stacks (i.e. overflow books with no home bookcase) I started in knowing absolutely nothing. I was soon surprised by the quality of the writing, the interception of poetry, the psychology, the introspective humanness of the narrative, the overarching ability to create a time and place and populate this with vivid emotions and a certain pervading atmosphere oddly somewhere between cozy and chilling. This was my first meeting with the characters of Three Pines, and although I was starting well past the beginning, I didn’t feel left out. I was welcomed in by this village and oddly held at arm’s length too – each person holding back during this narrative which marks an interesting swing in the series (according to other reviews) where the evil not only comes to Three Pines but is actually from it, hidden and sordid in unexpected places. Some readers found this unconscionable. I found it realistic, tricky, brilliant on behalf of the author, and unique to the mystery.

A rich and vibrant world where characters shine and side stories are just as compelling and enjoyable as visits to that elusive, dreamlike cabin, the only characters I had difficulty getting a bead on, as it were, was the Inspector and Beauvoir, ironically. Throughout, I had difficulty telling the two apart and marking them as separate, unique identifies. While the supporting characters were so alive and demanding of attention, the inspector and crew seem to be more instigators. Of course, I might not have felt this way had I read the previous four books in the series and, despite what would seem like a significant issue, I didn’t care. The book was too mesmerizing and something about it was to compelling to let this fret impinge on the story whatsoever.

The conclusion, eagerly anticipated for almost three hundred pages of brilliant, glowing prose is a little disappointing and not in the expected way. The revelation of the killer is more than satisfying, verging on the shocking, twisting the story and reader’s expectations around for the final reveal. It’s the mystery of the Hermit, however, that remains vague and after spending so much time, idealizing his secluded life and yet cringing at the price he paid for it, he remains aloof, his cabin of treasure unexplained and merely theorized. Readers sigh with joy at the conclusion, none-the-less, because the world is so compelling and The Brutal Telling simply has magic. I will now journey to the beginning of the series, Still Life, and watch as this world grows. Highly recommended.