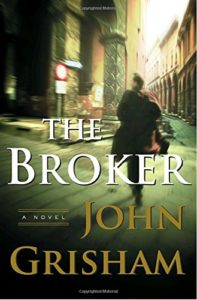 A Sellout, a Pardon, and a Planned Assassination

I’ve heard of John Grisham (who hasn’t!) my entire life and seen many of his bestsellers lounging in brightly lit grocery store racks and Barnes and Nobel’s spiffy “hot right now” shelves. You’d basically have to be in a vacuum not to have heard of him and, admittedly, read one of his books. But the entire legal thriller genre never really appealed to me. Sticking “bestseller” on it actually made the distaste worse – I immediately assumed that Grisham must be the Stephanie Myer of the thriller world.  When The Broker showed up in a mystery eBay audio book lot, I was forced to kick-back, put my prejudices aside, and give this big name author a chance.

The story began tantalizingly, with knife edged tension and the machinations of corrupt players against a vengeful lame duck president with his days definitely numbered. This behind-closed-doors movement of pawns is directed by a smarmy CIA agent, intent on discovering the truth behind a surveillance satellite deal gone bad. Joel Backman, a feckless political star was a powerful broker and an even more dangerous lobbyist, involved in a multi-million dollar hacking project to sell enhanced surveillance software to the highest bidder – the safety of his own country be damned. Caught and imprisoned, now spending his life in solitary confinement, Joel never gave up the secrets some of his cohorts died for and the CIA wants to know, for once and all, which country was behind the creation of the advanced spy system. Convinced to leave a lasting “screw you” testament to the people, the down and out President grants a slough of unpopular pardons including Joel’s. Little does he really know that he’s played right into the hands of the CIA who intends to hide Backman in Italy and then leak his whereabouts. The first country to send a successful assassin against Joel will incriminate themselves in the failed satellite deal. Joel, once the master puppeteer, is now a pawn.

Moved from solitary confinement to military transport and then suddenly to quaint little towns in Italy, Joel remains an uptight protagonist, seemingly unfazed by his punishment and the ramifications of his newfound, albeit limited, freedom. Still sharp and ruthless, Joel knows that his life is in danger, yet hasn’t uncovered the full complexity of the plans laid against him. In Italy, however, under the watchful gaze of the two-timing CIA, Joel does have a chance for escape. He intends to capitalize on it.

Fast paced, riveting, and adventurous, The Broker captures readers in the same way that James Bond or Indiana Jones would – with visceral danger, high stakes, and continually amplifying tension. Whether or not you are attracted to the entire legal thriller/corrupt politicians playing with the people motif (which I mostly am not being a drama and mystery fan) the verve of the novel and the scope of the travel is just too compulsive to resist. Joel himself, aloof and protective as he is, is a character that we both empathize with and loath and on some level this just makes the force of the story stronger. We’re invested: does he change, does he go-down, does he outsmart his equally Machiavellian enemies? None of the characters are people you’d like, but nevertheless they seem real and we become invested, if only for the sake of seeing them get their comeuppance.

The time spent in Italy and the whirlwind of cultural learning and assimilation is the best bit of the novel. The streets are alive and real, the timetables crunched making simple things like learning how to order the correct coffee and the right time of day mandatory. It truly is assimilate or die and with a world peppered by spying enemies, Joel cannot afford any mistakes. That doesn’t mean that there isn’t some fun and downright charm in the travel scenarios. It makes readers pine for an overseas journey – and some cappuccino.

When Joel starts running, his unlikely plan of escape requiring perfection and interlocking components and allies across nations, the blood truly starts pumping and the adrenaline soaring. We’re there, running from the unseen assassins and duplicitous agents. The narrative is breathless and poised and so are we, waiting with baited breath for catastrophe or glorious, last minute escape.

That’s why with everything going for it, all the pieces cleverly crafted and placed just so, the vivid world of characters and people positioned for an epic showdown, the ending is such a calamitous disappointment. It just . . . fizzles, as though Grisham forgot where he wanted to go with it or after such extreme creativity simply ran out of ideas and motivation. Readers are still on a high from the rest of the book and we keep turning pages saying “very funny, Grisham, now where’s the rest of it?” And . . .there just isn’t any. Apparently known for his weak endings (thanks to some online searches) Grisham disappoints with such a boisterous book and such a non-ending. I still ache wanting to know what happened and it’s because I can even feel this way, captured by a story and a genre I normally wouldn’t even glance at, that despite the disappointing conclusion I intend to suss out more Grisham and capture him at his very best.