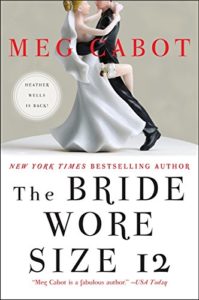 Assistant director for Death Dorm and ex-teen pop idol Heather Wells has been through four near death experiences, investigating crimes in the ever unfortunate dorm and bringing homicidal perps to justice. For now, however, with the start of a new semester, Heather is hoping for some quiet time in which to plan her nuptials to her long-time crush and previously secret fiancé, dishy PI Cooper Cartwright. Fretting over everything from nosy family who send invitations without asking to a potential medical problem, Heather has her hands full and is less than thrilled when a newly revamped Death Dorm becomes the home of a new VIR (Very Important Resident), Prince Rashid Ashraf bin Zayed Faisal whose multi-billionaire despot of a father has made a rather hefty, and controversial, donation to the college.

With the partying, rule defying prince (“call me Shiraz”) alongside an obscene amount of intrusive security and fan girls galore, Heather is swamped by angry parents, dorm change requests, and a college newspaper that seems to know way too much. When an RA, last seen at one of Shiraz’s blow-out parties winds up dead, Heather’s maternal instincts to take care of her students may just ruin her wedding – and her life. Cue some very unwanted guests, life-long hurts, and quirky family members and you have the recipe for a fast paced series finale. Of course, with this being the last book – are any of the beloved characters truly safe from the final obstacle to wedded bliss?

It is truly difficult to come to the final book in Meg Cabot’s upbeat cozy mystery series dedicated to Heather Wells, a sardonic and lovable heroine who’s not afraid to tough it out on her own. I’ve been putting this moment off because while Cabot may be quite prolific, Heather only has five books and after The Bride Wore Size 12 her adventures are closed for good – and I’m not ready. This series has been my first introduction to Cabot, famed author of The Princess Diaries (I’m in the process of checking this out of my library/workplace!) and has proven oddly cheerful and cozy while also having key elements of hardboiled mysteries, including some surprisingly graphic violence and a proclivity to let the sleuthing carry the story.

The Bride Wore Size 12 is an ambitious closure to the series. Heather has more going on than usual with a wedding to plan, relatives to ruin it all, a suspicious fiancé, a reveal-all college newspaper, shaky international relations thanks to the out of control VIR, and a killer on the loose. And yet, it all works. The usual charm of Heather and cohorts is consistent with all the requisite cozy that comes from deep attachment to well created characters and compelling scenarios. Yet, this time everything has an added level of seriousness as the finale decides to tackle some longtime family issues for Heather, opening the biggest can of worms possible – all those mommy issues that have consistently been a part of Heather’s life and self-definition. Over the killer’s potential schemes, the family saga prevails. We’re finally getting some answers and a long needed confrontation, although, really, it can never be satisfying after all Heather has gone through. Her mother does remain true to the character we always assumed she was and it won’t be long before the reader wants to run into the tale and dish some home truths to this ruthless woman.

We’ve also got an interesting situation involving self-defense and Heather’s sudden, avidly non-voluntary acquisition of a fire arm. Heather is no stranger to seeing violence and even after finding the bodies left behind by a high profile killer, she’s not sure she can shoot anyone – even a cold blooded murderer. With her PI fiancé fearful for her safety and the evidence that the killer has some backup goons, however, Heather’s secret weapon will play a grand role in the conclusion and leave readers stunned with how Cabot handled such a sensitive issue for our normally laid back, non-confrontational heroine. It’s as though The Bride Wore Size 12 is trying to pack as much emotion into one book as possible and considering that this was, legitimately, all she wrote, it works well. If we must say goodbye to such a beloved character and series, then it will be done, literally, with a bang.

With all that’s going on, the mystery here is less central than Heather’s life itself. However, it’s certainly a priority and the investigations go from revelatory to horrific. It’s not who you suspect and the reason, proposed to be everything from an assassination attempt to suicide, isn’t as dramatic as the rest of the book’s occurrences. Indeed, when the killer is revealed the novel choses realism and the inner workings of disturbed college kids to explain the pointlessness of murder and tie up those last few bloody strings.

And then – what we have all been waiting for! We have the wedding, the denouement, and our final tearful goodbye. And with that, my need for more Meg Cabot continues and her strange ability to be lighthearted, funny, and yet have the intrigue of a serious mystery or drama combined. It’s hard to say goodbye to Heather, especially after such a short series (only five books). Yet, the series starts out on top and ends on top, and in a way, that’s comforting because now, Heather shall always remain a favorite without the stain of a bad book or series that starts to slump. Now, to buy all of this series in hardcover and add them to my permanent library, to my husband’s horror.