Association of Small Bombs, The 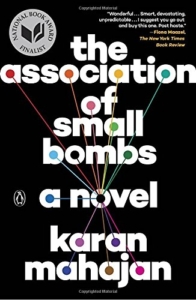 Not My Cup of TNT

Terrorism and its impacts are one of the key elements of modern society and the elemental fear within all of us. Transitioning from an intellectual premise (oh yes, that happens to those people, over there) to a daily possibility during 9/11 many Americans awoke to the terrifying notion that we are not safe – and probably never were. Following on 9/11 and all our ever varying red and yellow alerts, fearing everything from dirty bombs to a supposedly pregnant woman on the Metro secretly concealing a detonator, our society has become defined by a pervading dread that is just as incomprehensible as it is now ordinary.  And, in case you started to forget the constant fear we live in, Brussels was an unequivocal reminder that we still are not safe. With such a defining fear that has ceased being “for those people over there” and has spread to international proportions, a novel examining the impacts of terrorism as it normally is, on a smaller scale, promised to shine a light on the monsters in the dark and evoke an honest and comprehensive dialogue that neither wallowed in fear nor demonized victims and attackers alike. At least, that’s what The Association of Small Bombs, Book of the Month’s May selection, A New York Times Editor’s Choice, and a National Book Award Finalist promised. With BoTM’s glowing review which noted the complexity and bravery of the task Karan Mahajan had set up for himself, anyone living in the modern world with its oppressive 24 hour news fearmongering and the vivid memory of the twin towers falling on a “normal” and “peaceful” day felt compelled to enter the dialogue.

What we actually get between the thankfully thin covers of the novel is a disassociation of random muses, meandering sentences peppered with way too many prepositions, and a disturbing sympathy for the terrorists. Yes, we wanted humanization to try and understand why someone would effectively choose this life path, but I’m guessing that like me the majority of readers didn’t want justification and mild hero worship cloaked under the raiment of misplaced objectivity.

But first, let’s begin at the beginning. The novel starts (and mostly remains) in Delhi. Two Hindu boys are joined by their Muslim friend, Mansoor, in a thriving marketplace. Seconds later a “small” bomb, which kills relatively few and historically (and internationally) is of little note, opens chasms in Mansoor’s world. His friends mutilated and dead beside him, Mansoor struggles away and into the countryside in shock. He’s supposedly the lucky one, the survivor, but this is only the beginning of an ultimately unsuccessful recovery both emotionally and physically.

As Mansoor drifts into adulthood, he’s still unmoored by the defining event of his youth. Meanwhile, he and his Muslim family are seen largely as the enemy, ostensibly connected to terrorism by religion. Mansoor wants answers, not only about the bombing and the people behind it, but about himself and what being a Muslim really means or doesn’t mean. Fending off the big questions, Mansoor remains strangely isolated from the reader and while the topic is one that must be emotionally charged to him (his livelihood being destroyed by the effects of the bomb) he remains academic and removed. Perhaps the emotional deadness is intended as a shield, a comment on survivor guilt, but what it comes off as is (as Trump would say) low energy writing.

As the nebulous plot (for lack of a better word) continues, Mansoor drifts into a group of activists, mostly Muslim, where he meets his unstable friend Ayub. Ayub’s actions and shifting prospective are the final nail in the coffin and instead of answering any of the questions posed, the rapid and undetailed conclusions muddy the waters so much that readers are left wondering just what the big message was.

In the end, it’s all very harum-scarum with random thoughts and self-conscious prose weaving a faint story outline around two boys who are sort of friends and sort of colleagues. While Mansoor seems like the main character, this is doubtful. The lack of energy and focus plus the extreme distance between the characters’ thoughts (which we are rarely privy to) and their emotions (which are never related) makes the entire mélange of bombing and disaster inconsequential. If the point was to highlight the community of everyday terrorist victims as opposed to the large scale events that get so much air time, then The Association of Small Bombs was an epic failure that, if anything, seemed to diminish the very events it was trying to highlight.

Then again, if it was meant as an opus mildly in favor of terrorism (or at least sympathetic) then the image was just clear enough to be offensive without enough explication or tracking into the antagonists’ minds to either justify or examine the mentality of a monster. Ultimately, we feel compassion neither for the bombers nor for the victims. They’re all cardboard characters, occasionally poked and prodded along by a vague plot outline but never touched and never brought into any sort of full dimension. In the conclusion, I was surprised by my own lack of concern for the protagonists. Like Mansoor, I just felt dead and vaguely academic at the end, my heart untouched if not a little hardened. Not recommended.