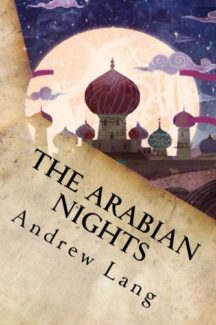 Continuing my long-standing classics kick, I returned to an old childhood favorite, The Arabian Nights. A little intimidated by the complete sixteen volume 1001 Nights compendium translated by someone named Burton (despite the great deal on Kindle), I did some searching for an unabridged best-of compendium to get me started on the adult version of the tale. Being available in an Audible version for my scenic work commutes was likewise a requirement. And so with little search and great trust, I landed on the Andrew Lang version and swiftly downloaded it. What I didn’t know is that the “unabridged” label meant that that the abridged and cleansed children’s version, also known as Arabian Nights – Fairy Tales from 1001 Nights: The Stories of One Thousand and One Nights was what I was actually getting. Some later research, most specifically some helpful hints derived from Goodreads, showcases this version as one teachers most often chose to present students a sanitized taste of the Arabian Nights.

My lack of research is, of course, my own fault. Amazon doesn’t help the matter any by taking all versions of The Arabian Nights and combining the reviews as though each version is the same. Anyone who knows anything about classics, much less translations, sees the flaw in this all-encompassing mixture. It has since become evident to me that the Richard Burton translation, favored by my beloved Easton Press, is the go-to adaptation and presents the tales with all their original verve, smutty passages, gruesome encounters, and regrettable ancient ideas which are appalling to modern ethics. In other words, Burton is the real-deal and Lang, the for children, school worth version. Live and learn.

So – what about Lang and this actual translation? Aladdin and his magic lamp (sans the rape scenes) is presented along with a host of colorful stories involving wise women, greedy fiends, magical creatures, genies, djinn, people turned into animals, stalwart adventures, and more. It may be the “diet coke” version of the original, but it’s still quite riveting and possesses a style and flair all its own. The more gruesome stories, sadly including my childhood favorite of “Ali Baba and the Forty Thieves,” were remiss from this edition and Lang took liberties with the included tales to spin a more palatable fantasy scape with distinct moral lessons. That’s not to say that readers don’t get some of the breathless, life and death struggles with the occasional disturbing hint of brutality shining through. We have some briefly passed over cannibalism in Sinbad’s famed journeys, a wife who proves to be a secret ghoul and evil sorceress, a seemingly religious old woman who lures her victims to their deaths, a sultan who publicly tortures his wife, and more. Mostly, however, the fairy-tale baddies are passed over quickly, and while this keeps the stories on target for a moral lesson (i.e. the good are repaid, the evil are conquered) it also leaves many stories feeling hollow, as though we are following an outline and skimming over main components which sadly, usually seems to include the conclusion.

On this theme, let’s talk about Scheherazade, the famed queen who seeks to end the Sultan’s slaughter of his new wives by unraveling fantastical tales with cliff-hangers every night, prolonging her own life beyond the Sultan’s allotted one day of marriage. Lang begins with the empire and the reasons behind Scheherazade’s scheme, including her establishment of the framework from which the stories unravel. What’s epically disappointing about this translation is that afterwards, we hear nothing more of Scheherazade. Her fate remains unknown as this version sputters to an end, the Audible thank-you spiel suddenly interrupting and shutting everything down. Lang never completes the framework, but instead leaves the translation with a half-hearted “there, that’s enough pages for a school curriculum” feel.

Ultimately, however, it’s still The Arabian Nights, however condensed and stylized, and because of this it is captivating. After finishing, I returned to Amazon, braver, and got that complete 16 volume Richard Burton Kindle set that so terrified me before. The reading commitment is more than worth it. I want to hear more of Aladdin (although oddly, he wasn’t my favorite), but I also want to further explore the narratives that were left out and the entrancing stories which were included but abbreviated. I want to hear more of the family who in seeking the magical bird, living water, and talking tree discovered a family, a history, and some supernatural wisdom. Likewise, the lake of multi-colored fish which represented a town and all the different races contained therein, intrigued me: what a curse to spend your life as a fish and what a strange mantra the Chondrichthyes chanted as the servants prepared them for the king’s meal. Likewise, the stories within stories, such as “The Man and the Hind,” created a complicated and interconnected universe that even peripherally was alive with character, culture, and the vivacity of lively writing and adventurous imaginations.

In conclusion, Lang’s Arabian Nights may be abbreviated and intended for children, but it’s not a bad introduction to the world of this famous classic. It does have its foibles, however, and a sense of incompleteness and preliminary summary, but it gets readers ready for more. It’s sanitization, which may be annoying to some audiences, could be a good thing for others. For those who like the “diet coke” sample, be prepared to whet your appetite for the main course. You’ll soon want to get your teeth into some serious Burton, and maybe even go for that Easton Press edition… if you have somewhere for all the 16 volumes that is.