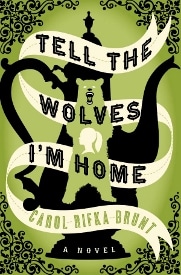 What were you doing in 1986? I was in college in the Midwest and AIDS was something that hung in the periphery of my world – scary and distant. Not so everywhere, of course, as the disease was ravaging gay communities all over the country, places where terrifying and immediate were the order of the day. In Tell the Wolves I’m Home, author Carol Rifka Brunt tells the story of a family in the middle of the crisis, through the eyes of a teenage girl.

June is a 14-year-old with one of those sisters. Greta is two years older, popular, petite and pretty while June is bigger, awkward and sort of nerdy. She loves to pretend she lives in a different time and place, especially loving the idea of the Middle Ages and the Renaissance. Where Greta has lots of friends, June pretty much just has one – her Uncle Finn. Finn is an enormously talented artist and as June’s godfather, takes her under his creative wing and encourages her, taking her to places in New York City that seem from another time, with Finn making everything more magical. Sadly, Finn is dying of AIDS. Tell the Wolves I’m Home is the story of how June, Greta and their parents weather the storm of illness, death and the aftermath all while the girls are desperately trying to come of age.

It’s easy to forget about the nightmare days of AIDS in the US these days. It isn’t on the front pages very often anymore and people would like to forget how horribly the public treated the sick and dying out of fear and bigotry. June doesn’t have the luxury of forgetting. She’s living the fear, she’s living with the loss of her once vibrant uncle and she comes to see that she has been living for a long time with prejudice and dishonesty. A poignant tale of loss and grief, Tell the Wolves I’m Home is also a story of growing into oneself and coping in an imperfect world.

Carol Rifka Brunt weaves a tender and painful story while managing to keep a brisk pace and insert a number of mysteries and family secrets along the way. Especially thoughtful is her portrayal of June as an adolescent with a heart that is perhaps a year or so behind her chronological age. She loves easily and with the fragile intensity of the very young and insecure. Her need for play is heartbreakingly sweet, as she uses her ability to pretend to cope with the tragedies in her life.

The relationship between June and Greta is also well drawn, though the motivations for each girl’s behavior are obvious to adult readers. But these characters aren’t adults, and they are as mystified by each other as teenagers would naturally be – each girl blinded by her own pain and insecurity to what should be the obvious – and simple – needs of the other.

Brunt doesn’t leave out the complicated family dynamics that having a gay relative with AIDS meant in the 1980s. June’s mother is scared and grieving, but also angry and closed to her ill brother. He is protective and secretive about the most intimate aspects of his life, understanding that openness would deprive him of time spent with his precious nieces. Finn loves these girls, and he does everything in his power – both in life and in death – to make sure they know it.

Overall, Tell the Wolves I’m Home is a lovely, sad, awkward and tragic look at growing up in a world of uncertainty and secrets. It’s beautifully written, with the kind of characters that stay with you long after you put down the book. An unqualified success and 5 stars out of 5.