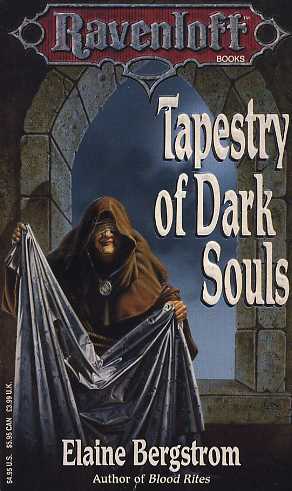 Fate and Fury in the Dark Domains

Jonathon has grown up cloaked in secrecy. Living with a group of old monks with a secret to guard, Johnathon knows little about his family and even less about himself and this possible destiny the monks hint may come to pass. Now that he is of age, the monks are sending him out into the world, into the nearby town of Tepest, where he will discover if he was meant to live a normal life or if he has the calling. What calling, he doesn’t know. But they say if he does have it, there will be no doubt, no way to misinterpret. And so he leaves.

Secrets are often more dangerous than truths and half-truths are the most dangerous of all. While the monks performed their rituals and presumed Jonathon was in a drugged slumber, he searched, scaling the sides of the castle, finding secret tunnels, unraveling the legacy of his mother’s story and his father’s shame. Most of all, he found the tapestry with its trapped souls. He listed to one shadow, and this shadow was with him always. This shadow claimed to be his father, and this shadow wanted freedom.

Tapestry of Dark Souls combines the gothic charm of misty lands and monsters and the rage of one young boy into a tantalizing tale with an old world, around-the-fireside feel and some truly brutal occurrences. We start with Jonathan’s mother, and we know the truth long before the silver haired boy does. It’s a truth of murder and rape, of werecreatures and suicide, of ancient evils and a dying order, and nothing about it is simple. In this truth, it becomes obvious that Jonathan has the potential to be a savior or a devil.

Tapestry of Dark Souls is one of my favorite Ravenloft stories, and Bergstrom is one of the most talented guest authors to grace the now very defunct and abandoned D&D inspired horror demi-plane. I read Tapestry first as a teenager, and now that I am walking down memory lane, I returned to it, half hopeful and half afraid. Luckily, the lulling grimness, the story within a story mixed with olden time sinister scenes and merciless violence still held me in thrall. The idea itself is original: trapping souls of unparalleled evil in a mystical fabric with its own horrible story, keeping them contained, except those few nights when they are allowed to escape. Jonathan’s attachment to the fabric is even more complicated and his fall from grace, his transference from someone with a potential for great good into someone who straddles the line between both good and evil, is appealing. Ravenloft has no heroes to root for, but only varying shades of sadness and an epic plot rife with betrayal and an extra creepy werewolf with an agenda.

Tapestry of Dark Souls remains one of my favorite Ravenloft stories and one of my favorite books in general. Part of the magic is in the telling. The tone of the story, the atmosphere, is just right. Part of it is in the ingenuity of the structure which magnifies the lairs of secrets and half-truths, giving the reader a bird’s eye view of the complicated threads that are weaving among the beleaguered protagonists. The story keeps its claws firmly in the readers and the ending is satisfying and, surprisingly, not as hopeless as some of Ravenloft’s other offerings. I am delighted that I decided to walk the dark domains once again and fall prey to the mysteries and monsters and all their darkly seductive stories once more.