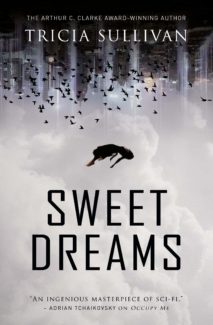 Catch Me In My Dreams

When the American Library Association (ALA) annual conference hit town, and a work gig (and gasp, the presentation I had to do along with it) got me some tickets, I swooped on all the free goodies that the publishers were endorsing and handing out. Tricia Sullivan’s Sweet Dreams was one such freebie, only given away on the last day and forcing me to make a return, mid-week trip just to grab a copy. What tantalized me was the concept along with the tripy cover art. A promising sci-fi mélange featuring one of my favorite horror-esque concepts: what if in your sleep in that comfy bed is the last place you’re actually safe? Take a Freddy Krueger-like trip into a futuristic sci-fi world and you yet again have another reason to never sleep again.

The story centers on Charlie, a disorganized and generally likable, sometimes hilarious, protagonist. In the fairly far distant future in a techno London where ads are holographs that literally follow you around, a failed medical trial has left Charlie with debilitating narcolepsy. It’s also given her a strange new power she doesn’t understand, the boundaries of which she is just now exploring. She can walk into your dreams and change them. With the encouragement of her cranky, elderly, anti-technology roommate, O, and her best-friend Shandy, Charlie uses this ability to become a dream hacker. Showed up at the opera nude in dreamland? No problem, Charlie will walk in with a coat and a save-the-day smile. Start to fall in you dream? Charlie will catch you. Reliving an old trauma or fear? Charlie will appear and give the situation a spin where you emerge a hero, issues finally laid to rest. It’s a pretty decent, if a bit far-fetched job, and Charlie is still working out who’s a good client and who has darker motivations for her talent (ala all the sex fiends and vendetta holders out there) when her ex shows back up in her life. This time, though, he needs her help. His new girlfriend, an up-and-coming soloist, is having incapacitating nightmares and Charlie’s new talent seems like the obvious answer. When these nightmares, however, reveal another entity working in dreamland and Charlie’s client takes a dive off her high-rise in the middle of a session, Charlie becomes both a murder suspect and a target. And that’s only the beginning, because she now has someone or something’s attention. 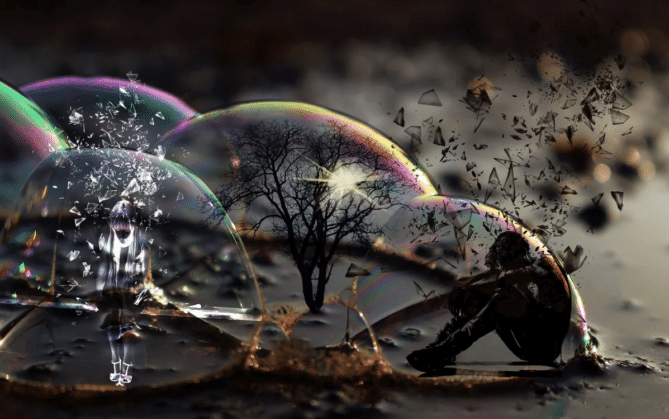 Sweet Dreams has a lot going for it, both in the form of its concept and its quirky characters. It’s also got its own set of unique and infinitely confusing issues. From the very beginning our place in both time and space is muddled and soon Big Sky, the techno-firm with apps that literally get inside your mind, including their new platform to help you sleep (you guessed it, named Sweet Dreams) and its competitors even further muddy our understanding of this world and its fluctuating state of normal. This has always, at least to me, been the challenge of sci-fi. Stop to do too much world building, explaining too much, and you ruin the sense of realism readers need to engage. Jump in with both feet with absolutely no setup or explanation, and you confuse audiences immeasurably. Sweet Dreams, oddly, goes to both extremes, especially as it builds out the mega-conglomerate that is likely the real enemy and creator of whatever dark forces are now inhabiting the dream world, which itself is actually a real place. Enter Little Bird, the rival setup with its own set of apps and scientists, and you have a technology and entity war that has readers confused as we try to pick up what is world building and what is essential to solving the mystery of just who, or what, is offing Charlie’s clients mid-dream.

As the story progresses the dream fiend moves on from Charlie’s clients into her own dreamscape, a weird inverse city that does exist and that she initially thought only she could see (it may even be tied into the inexplicable abilities this hush-hush trial gave her). It’s here that the operator lives, the one who has killed her client and now has her marked as the next target. Enter the Dream Police, a self-named duo of cops who suspect that a lot more is going on behind the scenes of these sleep apps, and you have a noir-ish murder mystery/corporate conspiracy underpinning your sci-fi that is both tantalizing and intensely convoluted. Add in the horror element: this entity, whoever or whatever it is, can control the sleeper like a puppet, dictate how they move and despite their own awareness, force them to commit suicide. It’s the Nightmare on Elm Street concept taken to a whole new level, where you become your own monster.

So, as you may have gathered, following the book is a lot of work. It’s mostly worth the effort though. Charlie is endearing, although irritatingly naïve with the necessary lack of self-preservation that keeps getting her in these situations. The dream world, with its surreal and creepy sleepwalkers and Charlie’s fantastical depictions of the illogical yet oddly meaningful nature of dreams is what makes the book so unique, the world so compelling despite its many, many moving parts. The imagery is as alive and fluid as a dream, the separation between the waking world and the fantastical symbolism of the subconscious evocative yet vague at the same time (I know, I know, it’s contradictory). The concept itself pulls the world together, even at moments where some silliness slips through or the bizarre nature of what is attempting to happen perplexes us. We want to follow, even if that’s only because we’ve never seen something like this before, a book so ambitious that it takes on dreams and seeks to live through them.

In the end though, the concept proves too heady and when we prepare to find out who the serial killer, or killers is, and who is ordering all these hits, who finds Charlie’s power so terrifying and why, the world buckles, its tenuous logic sluicing away. The book doesn’t know the answer to the question it’s so doggedly puzzled over, the end of the trail of betrayal and science and big firm money grabbing. We still aren’t entirely sure of the meaning of those somnambulists who like puppets have been lead to their own graves, their sleeping bodies under someone else’s control. The answer is given but it’s so unsatisfying, so vague and incomplete, so clichéd and overarching. We want a killer and a motive. Instead, we get something amorphous with a final action from Charlie that divorces us further from this tenuous reality we’ve built in a world of dreams and money-hungry ad holograms. Ultimately, we get the same old sterile warnings with no closure.

Sweet Dreams is still worth reading, especially for sci-fi fans who will, doubtless, recognize Sullivan as an up-and-coming voice in the genre. Just know that this isn’t an easy book, and while it is enjoyable, especially in its bravery to explore new terrain, it’s not yet complete.