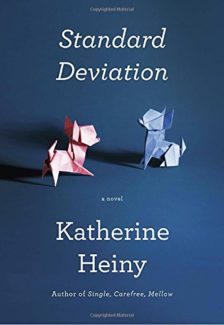 Life is a compilation not only of choices made, but opportunities missed, choices left to go to seed until the option to choose is gone, a collection of mistakes and might-have-beens and should-have-dones. Standard Deviation captures the complexity of all this choosing. It follows the introverted Graham who left his power-suite wife for his chatty and enthusiastic mistress, and is never quite sure that he made the correct decision. While he loves Audra for her quirky freshness – she’s anything but easy to live with.

Heiny has a way of taking seriously flawed characters, the quintessence of human, and portraying them in all their ugliness and beauty while keeping readers oddly engaged (albeit occasionally frustrated with our less than perfect protagonists.) Graham, the salty narrator with a laid-back perception and off-the-cuff drollness goes with the flow, following along in the dramatic wake of his now-wife Audra, a woman with no filter and no sense of social stigma. From oversharing a bride’s sexual predilections at a stranger’s wedding to hosting awkward playdates for her origami enthusiast son, to befriending Graham’s ex-wife, Audra is audacious and larger than life. She’s warm and funny in a way that would doubtless wear you down in real life (their rotating collection of long-staying houseguests attests to the fact that living with Audra is far from the rosey tinted thrill of an affair). What complicates the shenanigans of the larger than life Audra is the every-day recognizablity of life – the droll husband and wife conversations over dinner, the musings on old flames and lost chances, the process of ageing and settling, and above all the heartbreak and satisfaction of parenting.

Standard Deviation sets itself above standards early on. When Audra and Graham learn that their child, Matthew, has Asperger’s, based on a test which states that he has more than the “standard deviation,” Audra emphasizes in her brash, no-holds-barred way that you can’t draw such an arbitrary boundary. How do you decide when someone is really above the standard deviation, and what’s deviant for that matter? Can this mythical line be drawn in life and love – here’s what’s normal, here’s what’s a little quirky, and here’s the deviation?

Overlaying the hilarity, both dry tongue-and-cheek and truly absurd, Graham and Audra learn about themselves and life. Parenting a special needs child is a critical turning point, a time for active introspection on how we so callously hurt ourselves and others. Watching Matthew, who’s social difficulties are amplified, Graham starts to think about survival. Matthew’s growing up and difficult relationships plus his strange ability to fit in with the exclusionist origami crowd (non-folders beware!) highlights the awareness of life, the pain we cause, and the pain we have suffered. Graham has never been one for reflecting, preferring his spur of the moment affairs punctuated by long spates of a more or less quiet, humdrum life. Now, however, breakups, whether they be between lovers or friends takes on a new and terrifying tint. Graham’s honesty, softer than Audra’s for sure and more agnostic in flavor (unlike Audra, he never admits to knowing all the answers and dwells more in quandary than absolute) is never pretty. He admits the difficulties of having a special needs child, of ex-spouses who are more than old flames but less than friends, and the painful desire to have a normal child (whatever that is) sometimes, if only to escape the amplification of life’s hardships. Graham, like all of us, appreciates his creature comforts and yet at the same time, feels guilty over the inherent selfishness that appears, even in the supposedly full-time sacrifice of being a parent.

An awareness of age is key to Standard Deviation as well. Graham’s wild days, for better or worse, are over, yet Audra appears to be shopping for the latest and greatest. A marriage born out of an affair, the fear of a similar betrayal underlies the love and closeness. Is Audra going to trade up? If she does, what will Graham do and what can he say? Never really feeling guilty over his extra-marital escapades (which admittedely ended when he married Audra), Graham nevertheless has a certain paranoia that is all too human. He questions, yet he feels as though on mute, overwhelmed by layers of exhaustion, confusion, and raising a child. How does one survive all these things, after all, and stay happy in the face of potential losses?

It’s here that the narrative sings, the flowing writing style conversational and confessional, as though we are in Graham’s head, living through his eyes. His words, whether beautiful, ugly, or just tired are raw and unfiltered; making it impossible for readers not to care. Normally, cheating narratives aren’t my favorite and these usually aren’t characters I’d feel especially empathetic towards, yet somehow the magic of the writing and the presentation takes me away from my own worldview, immersing me in the world of these two, struggling people who don’t have all the answers, and may be just experiencing a good patch in a long-line of break-ups and nothing-is-forevers, or may ultimately be survivors, scarred but ok. There’s no definitive ending, merely a window into the lives of one family, fractured and yet together, heartbreakingly temporary in the way of all things.