Spirituality and the Gentle Life 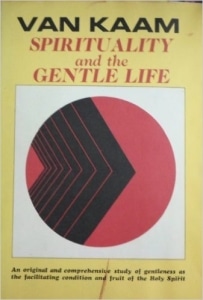 Encountering Spirituality and the Gentle Life in a massive luck-of-the-selection Christian eBay book lot, Van Kaam’s promised examination of true gentleness and deepening spiritual dedication to God was promisingly intense and thoughtful. From 1974, this little known (and now out of print book) seemed like a treasure trove when I first started reading. Dispelling the mythology that gentleness equates to weakness, Kaam deliberates what gentleness truly is and how false gentleness (as a certain timidity and a front) are excessively damaging to the individual and the perception of religion. To me, this was fascinating that gentleness, by its definition, did not mean taking cruelty on the chin and always being, as it were, the nice guy. This is where the strength of the book becomes apparent.

The calm, deliberate examination of gentleness and the ramifications of the emotional and mental harm of keeping up a gentle front were compellingly argued. It reminded me of a song my yoga teacher likes to play during Shavasana (the rest period at the conclusion) which stated “be gentle with yourself.” Here, the gentleness is more like a forgiveness, an understanding of limitations, and an acceptance of the world and injustice without being self-destructive, nihilistic, or overly bitter. It’s a tight rope to walk – one we are destined to fail – as this is an attitude shift and a shift in perception. Kaam notes that it is not always the correct response, but as a base resting state of the mind, is the only way to be open to the possibilities and the meanings of life. Once this inner tranquility, this gentleness of acceptance, takes over, Kaam argues that then, and only then, are we able to hear God through all the static and put aside the demands of life to heed the spiritual dimension and grow religiously.

The text is well paced, the position elaborated and explained convincingly, with plenty of details. At first, readers feel that an undiscovered gem, a Christian classic along the lines of a less savvy C.S. Lewis has been discovered. The first half of the book is so illuminating, this simple and intriguing principle to effectively not get all wound up in things (something I should certainly listen to) is a common sense antidote to our inability to hear or experience the deeper things in life because of all the ephemeral distractions. It was a book I adamantly devoured, curled up on my boyfriend’s couch repeating randomly every few minutes “you have to read this.”

But then, the straight forward simple philosophy continued repeating itself. Essentially, the book should have ended half way. The idea, at first so brilliantly explained becomes rather old hat and it’s difficult to be gentle and patient with the text. We get this foundational principle and it’s great, now let’s move on to the meatier portions of the argument and see the text grow in complexity as our spirituality should. This is where Spirituality and the Gentle Life, compelling as it mostly is, loses its status as a must read and becomes just another Christian self-help book neither better nor worse than all of the others out there. The text needed to lead to some fruition instead of finding different ways to repeat back what it had already established so well. It’s a helpful but not an extraordinary book, something worth reading if you have it (or discover it in another jumbo book lot) but not a title to be especially tracked down. I’d be willing to read more Van Kaam for sure. The spark is here, but the kindled flame is allowed to die instead of being encouraged to grow.