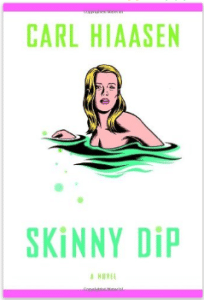 A Rollicking Murder on the High Seas

Joey’s idea of a romantic two year anniversary with her philandering (and let’s be honest, just plain dull) husband hardly includes a midnight stroll across a stormy cruise-ship deck and a sudden push that catapults her over the edge. It seems that Chaz Perrone, rent-a-biologist and scammer, has finally embraced at least one call to action and, you know, actually done something. The only issue is that, as a would-be-murderer and a recent widower, Chaz may have the will but certainly not the talent for crime. Enter the python-loving loner detective, Karl Rolvaag, and the heat is about to be turned up for our “grieving” husband.

Meanwhile, saved by an epically timed floating bale of pot, diver champion Joey arrives at an island off Biscayne Bay where Mick Stranahan (apparently a reoccurring Hiaasen character) is living all by his lonesome with a Doberman that can’t swim and the memories of six ex-wives, five of whom were waitresses. A trigger happy ex-detective himself, Stranahan joins forces with the wily Joey to wreak some vengeance on the clueless Chaz.

Of course, all this publicity takes its toll on Chaz and on his relationship with agricultural boss Red Hammernut.  Hammernut is concerned that his flaky biologist, responsible for taking pollution samples in the Everglades near Red’s tomato farms, might spill the beans about his real activities. Deciding to do some disaster control in the form of babysitting, Red sends along the hairy, overall wearing goon, O’Toole, who has a love for grilled gator, roadside cross markers, and an unfortunate bullet stuck in a not so comfortable place which leaves him with a yen for some medicine with a punch.

Side-splitting, sardonic, and generally insane, Carl Hiaasen’s Skinny Dip mocks everything about the traditional thriller while still delivering the goods in an unconventional and unpredictable manner. Casting the steaming hot land of Florida itself almost as a character (ok, a dysfunctional lunatic running amok throughout the story), each moment shines with razor sharp wit and a no-fear approach. Hiaasen will go there, whether it’s a character with a bullet stuck in his behind or a murderous ex-husband seeking a little bedroom assistance from a certain powerful pill. With this no holds barred approach, Skinny Dip merges comedy (sometimes satirical, sometimes physical, sometimes situational, and sometimes by just the flow of the written word itself) with a rather go-get-‘em revenge plot.

The heroes we lo . . . well, they’re just ok (other than Rolvaag and his slippery pets.) It’s the villains of the piece that we love to hate. With chapters bouncing between multiple viewpoints both Joey’s rage (and, I might add, sense of the ironic) and Chaz’s uppity smarminess combines for an explosive thriller-like atmosphere. Yes, yes, its comedy and some if it gets quite far out there (and all the better too, because those moments are pure gold), yet the driving force of the narrative has the appeal of a reverse who-dunnit. I guess you could call it (if you just must label a thing), a who’s-going-to-get-it. This is where our delightful cast of villains comes along. How can you not want to spend time with the whiny, self- centered, cringing worm, aka Chaz, as Joey engineers the greatest mind game of all times? And what of Hammernut, the comically named, red haired business man (or should I say ‘bidness, in Red style) and his even more enjoyable goon, O’Toole? Don’t even get me started on O’Toole, my personal favorite character. Between his quirkiness and the sheer outlandish nature of anything that happens when he is present, readers will be rolling around on the floor in fits of laughter. He’s the one villain we don’t want to see get it in the end because the guy is just so darn amusing and purely oblivious.

Turning a phrase with that certain Hiaasen mystic, a mixture between the elegant and the vulgar, the writing style, something I almost never bother talking about in reviews anymore, is so distinctive and just downright vivacious, that it’s worth talking about. Whoa, did you get a look at that, a modern book that values the beauty and the play of words? And don’t start to think this means that any mention of writing style means instant snooty alert. It doesn’t. Hiaasen is completely down to earth, yet descriptive, with a satirical voice that is just, simply, uniquely his. In plain English, the dude can turn a phrase.

My particular edition of this novel came from my local library, an audiobook version that I used to arm myself against all the bad Washington DC traffic during the Pope’s visit. Sadly, the traffic was great and I got into work in record time, which was exceptionally annoying because I just wanted to keep listening (ironically, the next week traffic was worse than usual, and I had a not-so-great audiobook – do you see how unfair life can be?) My edition was read by Barry Bostwick and if ever a voice could simply embody a narrative, his does. Each character had a distinctive way of speaking that perfectly matched their personality, and Bostwick’s Florida accent for O’Toole and Red just simply made the narrative. Those were the characters real voices, and if you don’t listen to the audiobook version, you are certainly missing half of the fun!

Highly recommended. I now have a new favorite author and yes, I bought a hardcopy, because having several thousand books and trying to “cut down” just isn’t working. I have no regrets.